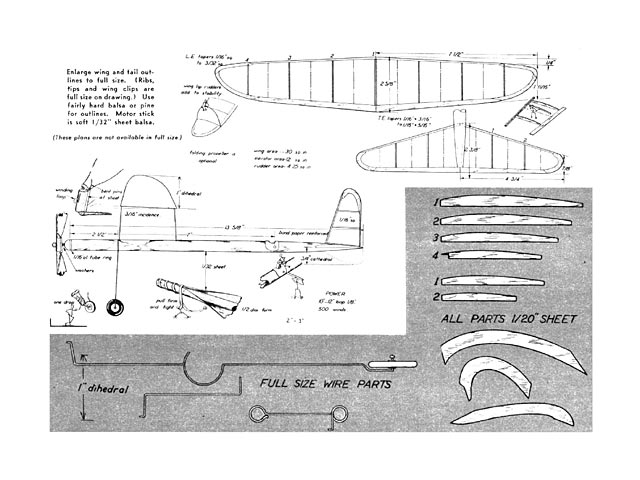 With supplies becoming more and more scarce, necessity should make us modify our modeling activities. Those outdoor models we used to throw together with such abandon will have to be limited so that supplies can be conserved for contest ships.

This ROG was built with this idea in mind. It was to be simple, quickly built and still out of the usual stereotypes. We wanted to incorporate as many innovations as possible, but we wanted a rugged model. If necessary, we were going to power it with common rubber bands.

When it was completed, we found our time had been very well spent. It flew with all the zip and power of a Moffett job - naturally with flights of shorter duration. It formed the base for some interesting experiments. We tried variously sized rudders and verified some theories concerning the effect of varying the area. Too much rudder causes sharp turn to the left and, in extreme cases, a left spin. We went to the other extreme by minimizing the area until a right spin resulted. A warped wing or turn in the rudder will naturally affect the results. The rudder shown is exactly the right area. By using just a slight right turn a good climbing right turn can be obtained.

Having solved the rudder problem, we turned to the center of lateral area. Its fore and aft position was already determined; all that remained was the vertical position. The wing mount places the wing in a parasol position and the model is quite stable. It will, however, bank on fast power turns. To begin with, the area between wing struts was covered with tissue to simulate common pylon mounting found on most gas models. A marked improvement was noted in climbing characteristics, and the model also became less 'touchy' on adjustments. It must be remembered that there is a difference between design and adjustment characteristics.

The area between struts was divided into two and replaced on top of the wing near the tips (see photograph), with care taken to align them properly. This follows the theory developed by Carl Goldberg and Louis Garami and worked out on Garami's Atom powered model recently published in Air Trails. It's really one swell idea! It worked to perfection. The model rode almost perfectly level in fast climbing spirals and thus obained more altitude. All-around stability was improved and adjustments were not so touchy.

You may want to try other experiments which might be risky on a more complicated outdoor model. But whether you're an old hand or still a bit inexperienced, you'll enjoy a model like this - so let her go!" 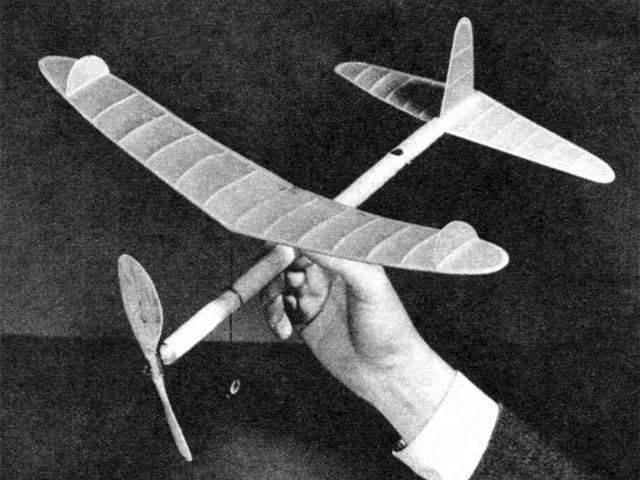