Quote: "THE Model is the result of experience gained during eighteen months of progressive training in Stunt flying. The designer's first attempts, soon after Xmas 1948, were with a boxcar type of model and with this he advanced as far as loops, bunts, horizontal eights and inverted flight.

Following this, a kit job was soon written-off and the forerunner of Demon King, by name Elfin King, was designed for the Northern Heights Gala. Due to fuel feed trouble, it was unable to show its paces, but gave its designer many hours of flying in Camp. It was found to be very easy to control through all manoeuvres.

Having bought an Amco 3.5, Burch immediately scaled up his design, the result being Demon King. With the same performance characteristics combined with the ease of construction and great strength, this was the answer to all his problems and, on 60 ft lines this model was found to be smooth in all the stunts of the Schedule.

At the end of September last, the designer demonstrated with Demon King on the field at Eaton Bray, and the performance was all that could be wished for; the Aeromodeller's own CL addicts were most impressed. The designer suggests that first flights are made on 50 ft Light Laystrate lines, using a 9 by 6 prop. This will allow sufficient time to think about the manoeuvres, while giving plenty of 'feel' on the lines. The maximum line length advised is 60 ft, when familiar with the handling of the model. With the AmCo and a 9 by 6 prop, Demon King flies at between 60 and 70 mph, is easy to control, and any manoeuvre in the book may be attempted with confidence.

Notes on Construction: While the work entailed is perfectly straightforward the following pointers may be useful.

The assembly of bearers and Formers 1 to 4 is done first and after installation of bellcrank, lead-outs, push-pull rod and tank, the sides are added. The cowling is made next followed by the tail surfaces. The wings are built in three sections, assembled after the internal construction is completed.

Tailplane and fin are double-cemented to the fuselage; wing is attached with strong rubber bands." 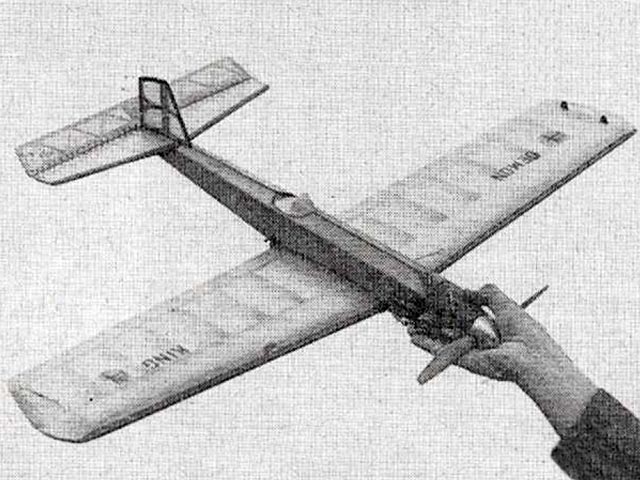