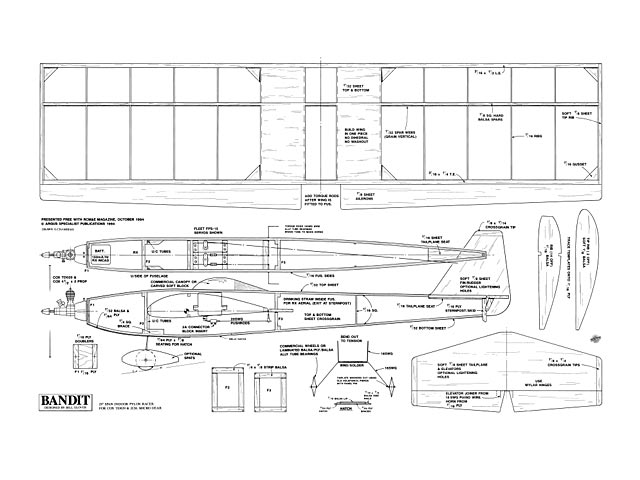 Quote: "Hi Mary, please see attached files of Bandit. If they go together ok [aligned and stitched, done] I can add some introduction words of installation details and some more photos of gear setup. I have the rest of the magazine article somewhere too. I hope they are ok. I have a few more plans around too. Regards, Jono"

This model came into being when a bunch of pylon racing enthusiasts decided that my joke suggestion of a meeting at the Model Engineer Exhibition sounded like fun! Two prototypes were flying within a couple of weeks and these, plus copies of the plan, went to the Sport 40 AGM at the beginning of December. The idea really caught on and no less than twelve Bandits were completed in time to race on the final Saturday of the MEE - this shows how quickly they can be built!

Designed to fly successfully within the confines of Olympia's National Hall, this is also an agile sports model for 'normal' outdoor flying and should not pose any problems for those with reasonable aileron experience. With a wing loading of around 7 oz/sq ft, it glides pretty well - one of the prototypes hooked a thermal on its second flight and another has been used as a slope soarer!

It is actually a semi-scale model of the full-size Formula One racer 'El Bandito', though the wing planform and fuselage cross-section have been simplified to aid quick construction.

General comments: Weight-watching is not critical as there is plenty of wing area, but reasonably light wood should be used - particularly for the tail surfaces. The models at Olympia weighed between eight and ten ounces, with no noticeable difference in flying performance.

A Cox TD 020 will provide plenty of power (we all flew initially with the propellers fitted backwards to limit the thrust) and one has flown successfully with a Pee Wee. Although intended for micro radio gear, the fuselage dimensions are deliberately generous and mini servos could be used with a slight weight penalty.

Some standard receivers will fit, but a small battery pack of around 150 mAh capacity is required - this should easily give 10-15 flights on a full charge. By adding 1/8 in to the fuselage width, I have fitted four-channel radio to my latest Bandit, which is powered by the delightful PAW .55 diesel. Using a 270 mAh battery, this version weighs 14.3 oz and flies superbly!

Flying@ With CG and control movements as specified, this should be quite straightforward. Some of the models raced at Olympia had never flown before and were successfully test-flown (with propellers fitted backwards) inside the hall - though I wouldn't recommend this!

The model is lightly loaded and will climb away briskly from a gentle hand-launch. Once trimmed, it copes surprisingly well with windy conditions, but be prepared for minimal penetration when the engine stops! The plug-in u/c is quite practical for outdoor flying over grass (due to the low landing speed), though it can be flown without if desired.

The glide is very flat when flown slowly, but excess height can be dived off without picking up too much speed due to the thick wing section and low weight. All usual aileron/elevator aerobatics are possible, including inverted flight, but remember the fixed fuel pickup!

The integral tank on the TD 020 is ideal for indoor flying (90 seconds is plenty long enough!) but is a bit limited outside. I made an external tinplate tank holding about 20 cc when we were invited to fly at Sandown Park; others fitted small C/L tanks internally. All retained a fixed pickup, allowing the motor to be cut by flying inverted. My four-channel version uses an MFA 1/2 oz clunk tank (this was the smallest one l could find).

Construction: Wing: This is very straightforward as the NACA 4418 section is flat-bottomed aft of the lower spar. Note that the centre bay (inside the fuselage) is not sheeted. I used cyano throughout as it is light and quick..." 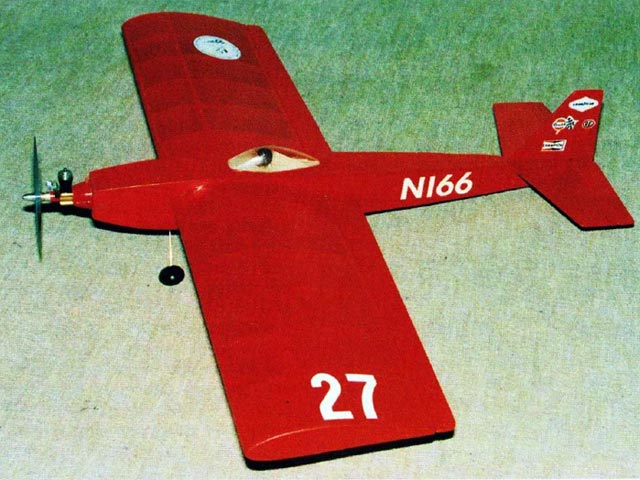