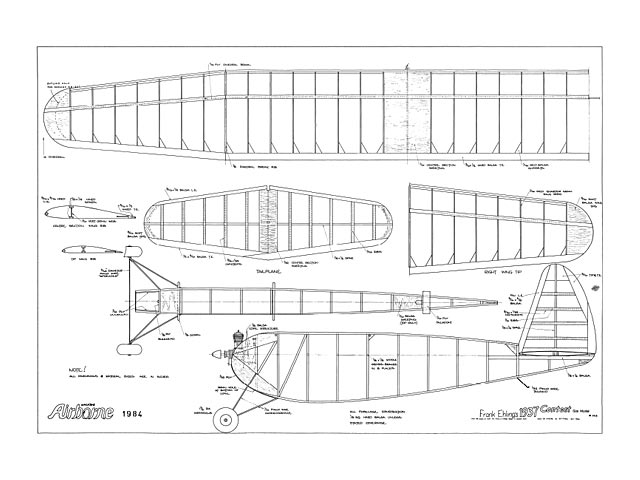 1/2A Texaco plan from the defunct Airborne Magazine of Australia.

I’ve been looking for this plan since I first saw it decades ago in a dog-eared copy of Airborne. It was built by Colin Borthwick, the John Pond of Oz. He had great success with this design and there was a photo of it with a full size version captioned : Dignity & Impudence.
Robt. Foster - 10/07/2022
Otto Bernhardt had an ingenious modification for this model. He ran the top longeron all the way back and created a fully flying stabiliser using arrow shafts. Someone needs to post that along with the WWII style face he had painted on it. He said it was an under appreciated design.
John - 10/07/2022
I really don't know why this design isn't more popular in R/C Assist. It has all the right attributes: Large-high AR wing, minimal frontal area, side profile for good visibility, and generous fin area. It penetrates well with that Clark Y aerofoil. I guess there's too much Monkey-see, monkey do in SAM.
Every one I've seen requires a shim at the rear of the wing. Maybe the flying stab would fix it.
Dan - 11/07/2022
Actually the model that John referred to was mine, not Otto Bernhardt's (I'm Otto's son). But he's right about the Ehling being under appreciated in SAM -- it's one heck of a good flying airplane! And very competitive!
The full-flying tail John mentioned worked extremely well. The stab was built in three pieces: the center section was about 4 inches wide and had the fin/rudder glued on top, and the outer stab panels each had a piece of brass tubing sticking out maybe 3-1/2" from the root; the tubes were one size different (say, 15/32" and 1/2") so that they telescoped and overlapped each other inside the center section. The center section had short brass tube bushings to match. The smaller tube had a short aluminum insert epoxied inside that was drilled and tapped for a 4-40 machine screw. Finishing it all off was a machined aluminum horn that was maybe 2 inches long. A single 4-40 screw went through the base of the horn, through the two telescoping brass tubes and into the insert, holding everything together. The airplane was flown with a Super Cyclone and an Anderson Spitfire on spark ignition, and also a K&B 4.9 and 6.5 in the glow classes, and the tail never gave a bit of trouble.
I should also mention that the stab center section was rubber-banded to the fuselage. With the far-forward landing gear, the airplane would often ground-loop on rollout, and the stab tips would take a beating. Having the tail be able to tilt on the fuselage saved me some repair work, I'm sure.
Dan is also correct in pointing out the design features that make the Ehling a competitive SAM model. But I hope he was mistaken about shimming the trailing edge! My model balanced at about 50 percent and needed a 5/16" balsa shim under the leading edge to get a nice floating glide. If I were building another I would build that incidence into the fuselage.
Lastly, the scowling face that John mentioned was inspired by Earl Cayton's Com-Bat C/L model (oz7717).
Phil Bernhardt - 12/07/2022
The model ground loops because the wheels are so far ahead of the CG. They were placed there to protect the handcarved air screws. I’m amazed you were able to fit a Cyke in this model!
Geoff - 13/07/2022
Definitely shim the rear of the wing. Jim Adams did this to both of his and they were flown R/C & FF. The unplotted ribs can be obtained from oz1067.
Steve Willis - 13/07/2022
Add a comment