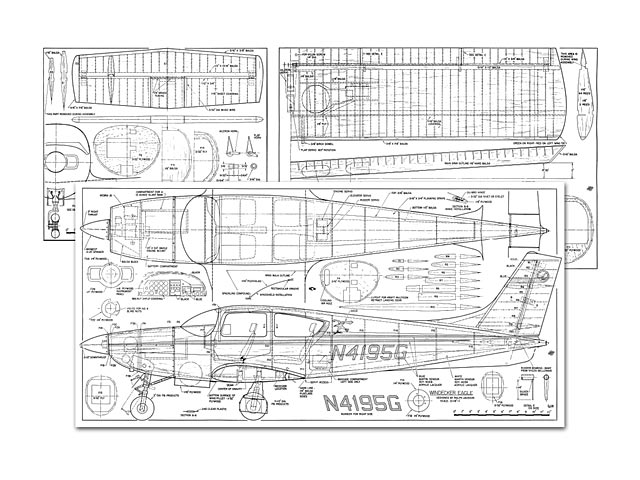 Quote: "Windecker Eagle, by Ralph Jackson. Building a balsa model of a plastic plane is unique application of conventional technology. Within this clean exterior hides a Webra .61, Kraft R/C and Multicon gear.

The first photograph I saw of the 'Windecker Eagle' was not in an aviation magazine, but in Plastics World, a trade magazine for the plastics industry. It showed a sleek looking airplane flying over the Grand Canyon. The brief accompanying article was enough to indicate that here was an unusual and potentially excellent subject for a scale model.

Further research provided more interesting details. The full scale Eagle is constructed primarily of fiberglass reinforced plastic. A special resin is used in combination with non-woven glass fibers. The construction methods are quite similar to those commonly used in making fiberglass model airplanes. To the scale builder there are some very desirable features. It is a beautiful, single engine airplane with a tricycle landing gear, has aerodynamic characteristics which promote reliable performance as a model, and has a smooth, shiny exterior with few seams and rivets. There are no external radio antennas because the plastic construction permits them to be installed internally.

In selecting a scale for the model (2-1/8 in = 1 ft), a single measurement was the determining factor. The model is the smallest size in which a Webra .61 can be completely enclosed. Although fiberglass construction seemed an obvious choice for the fuselage, conventional balsa construction was chosen because of the smaller building effort required. The wing and tail are all balsa, rather than foam construction, in order to minimize weight.

A number of special features have been incorporated in the model to closely duplicate the original. They include completely enclosed control horns on the tail surfaces and coaxial torque rods to actuate the flaps and ailerons. Control surface hinge axes are offset as in the full size airplane. The exhaust system functions as a muffler and has operating exhaust stacks with scale size and location.

Construction: Since the model is built using conventional balsa building techniques, most of the construction comments will concern unique features of this model. As a general note, the lightest balsa available should be used. Particular effort should be made to keep the tail section light in weight.

Fuselage: The sides, top and bottom balsa sheets are glued to the formers. Planking strips are then added to the remaining areas. This type of construction permits accurate alignment of the assembly and minimizes the time required for planking. The right and downthrust angles are build into the engine mounts. Both angles are the same as in the full size aircraft.

A hole is cut in the firewall behind the engine cylinder to provide an outlet for cooling air. Balsa blocks are added in the compartment behind the firewall to direct the cooling air out through the nose gear opening. The seat frames and headrests are made of balsa. The upholstery is cut from a fuzzy toilet seat cover purchased at the supermarket.

The wing openings on the fuselage are carved to fit over sheets of 1/32 plywood placed on the upper wing surface. After positioning waxed paper between wing and plywood, the wing is fastened to the fuselage with its front dowels and rear nylon screws tight. Many small balsa blocks of any thickness are then bonded with epoxy between the plywood and fuselage to form the fillet. After the epoxy has hardened, the wing is removed and the fillet is carved to shape with a rasp and sandpaper..." 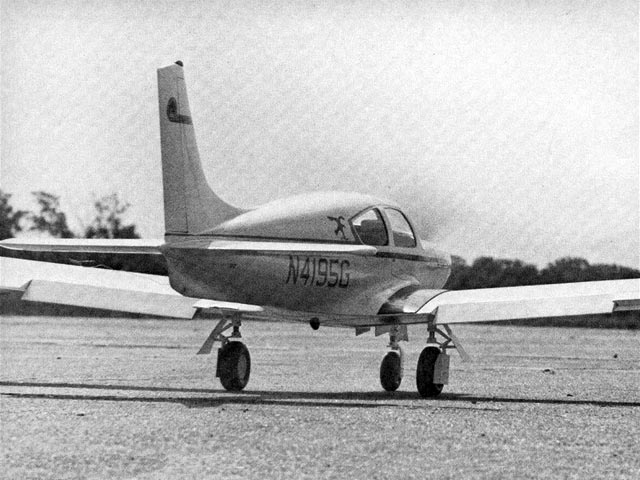