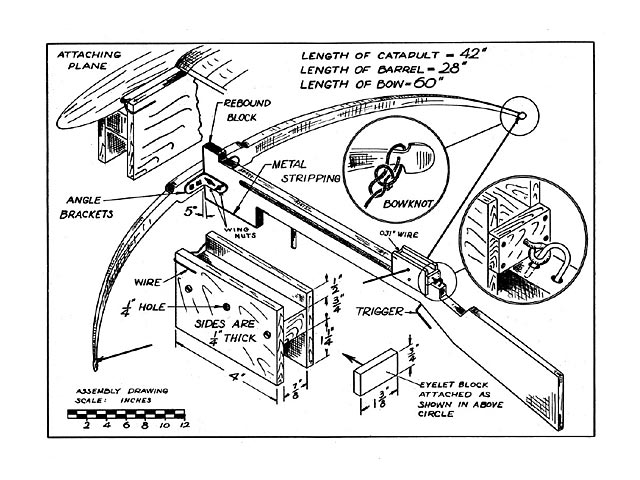 Quote: "Give it the Gun With Gidapult. By John Stockwell.

The scarcity of balsa, rubber and other materials essential to model building due to the war-needs of our government, has reduced the field of flying model planes to somewhat narrow proportions. Clearly, gliders are the one type of plane left which will give all the necessary pleasure in construction and at the same time provide the builder with flying thrills when the craft is tried out.

Still, even launching the average small-sized glider is a wearing sport. After a half-hour or so, when the flush of enthusiasm has not yet reached its zenith, the builders's arm becomes tired and rapidly wears out its usefulness for the day.

The idea which immediately occurs to him to substitute a glider launching rack for his good right arm is nothing new. Glider launches have been made for years, chiefly in the modified form of a bean-shooter. The rubber-shortage has made this type obsolete. Again, the rubber-powered launch places a good deal of stress on the fuselage of the glider and often tears it to shreds.

The glider launching gun on this page does away with most of the drawbacks connected with rubber-powered launches; moreover it is constructed chiefly of non-essential materials. Whatever metal parts are called for are easily obtainable in any hardware store, or better, still, any scrap heap.

The stock of the launch is entirely white pine, sawed to shape from a single piece. The dimensions as specified in the plan were found to be entirely satisfactory, but a little give in either direction is allowable. This also goes for the bow. The business-end of the barrel is lined on the outside with metal stripping for reinforcement and to prevent the top-piece from breaking off due to impact or the bottom-piece breaking off due to strain from the bow.

The slide groove, sawed lengthwise along the barrel as indicated, can be made by boring two holes with a half-inch augur at each end of the projected groove and sawing barrel-length-wise with the blade of a scroll-saw which can be detached and placed through one of the holes. Approximately halfway down the barrel, according to the length of one's arms, a 1/2 in hole is bored and a dowel rod of corresponding thickness and a length adjusted to the builder's hand, inserted and secured..." 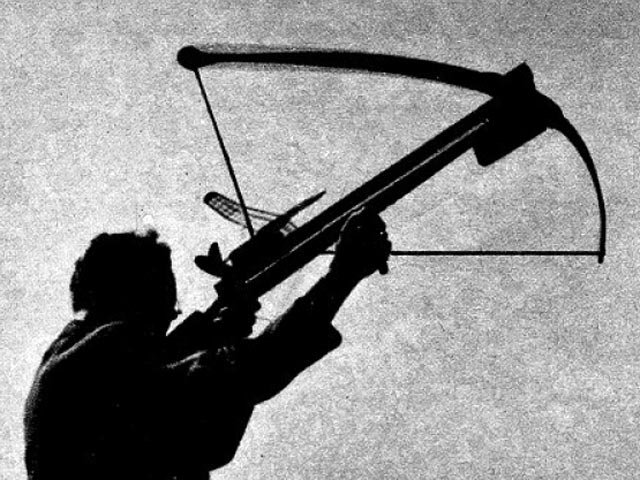