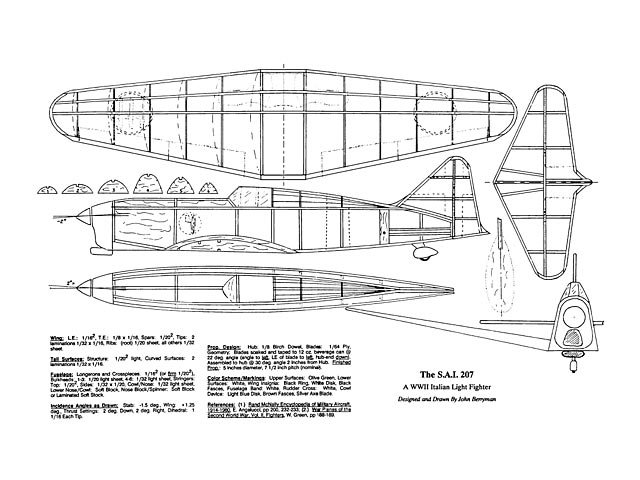 Quote: "Arguably the best example of the 'light fighter' concept to come out of WWII, the SAI-207 has the elegant lines that all Italian aircraft seem to possess.

Everybody wanted one. Just about everybody tried to build one. And it appears that only the Italians nearly got one. I'm talking about the Light Fighter concept: a small, light pursuit machine, constructed of 'non-strategic materials' (read: wood), that would somehow manage to perform on a par with larger, heavier, more sophisticated machines.

The SAI (Societa Aeronautica ltaliana) 207 was an outgrowth of the pre-war SAI-7, a civilian, tandem-seat, two-place monoplane that achieved a 100 km closed-course speed record of 244 mph on a piddling 280 horsepower. After some fumbling and false starts, this aircraft evolved into the SAI-207.

As many as 13 pre-production prototypes were completed, but production was stopped to accommodate production of the even more advanced SAI-403.

I've always found Italian WWII fighters to be extremely attractive, and when I saw an illustration of the 207 (which displayed it's too-cute-for-words panted tail wheel), I was hooked.

CONSTRUCTION Flight Surfaces: There's nothing new here for the experienced builder. As always, every bit of weight you can save in the tail-feathers will pay large dividends later. Dig into your balsa box for some of that 4-pound stock you've been hoarding.

Unlike many Peanut designers, I use 1/16-inch stock for the leading and trailing edges of my wings. My rationale is that after shaping, the stock will approximate 1/20-inch square anyway and that, particularly in the case of the wing leading edges, a bit of strength is warranted. Incidentally, after years of experimenting with various methods, I've found nothing better for shaping the leading and trailing edges of wings than those disposable sandpaper nail files. Sometimes, the cheap solution is the good solution!

Fuselage: There are some features of note here. First of all, please note that the fuselage is not rectangular in section! Rather, it is trapezoidal in shape. I used false bulkheads to maintain this shape as I constructed the fuselage; you may elect to use whatever even more complex and elegant method you wish. Second, note that the upper longerons meet at the last fuselage cross-member and become the mount for the rudder. In other words, the trapezoid becomes a triangle at that point. Third, there are some design/assembly considerations you may wish to keep in mind as you proceed with the fuselage:

The 207 has a high thrustline (I've actually deviated from scale, and dropped it a bit). The issue here is that a high thrustline provides wonderful opportunities for your rubber motor to rub and bind on fuselage cross-members, or even break them (particularly in the nose). Not good. I've tried to partially address this issue by mounting the rear motor-peg low in the fuselage.

You'll notice that the 207 features an oil cooler (?) mounted on the chin of the cowl. As drawn, it will almost certainly interfere with your prop. Check clearances carefully before painting!

Finally, the rubber-motor-rubbing-on bulkheads bugaboo irritated me so badly that I decided to try another approach. Though the plans show conventional sheet over-formers construction for the upper cowl, I decided I was willing to pay a weight penalty if, in return, I benefited from better motor runs and less breakage of internal structure. So, in the prototype, the upper cowl is actually a soft balsa block that I tack-glued in place on the fuselage, shaped, removed from the fuselage, and hollowed with a Dremel.

Now, here's the interesting part of the story: The finished aircraft, including two coals of thinned nitrate dope, weighed 6.8 grams - about what my stuff usually tends to weigh. In other words, apparently I paid no weight penalty. In addition, the building process was definitely speeded up by using this method. And finally, the use of a hollow block imparts no twists or torques to the fuselage, as can happen when sheet balsa is 'persuaded' to assume compound curves..." 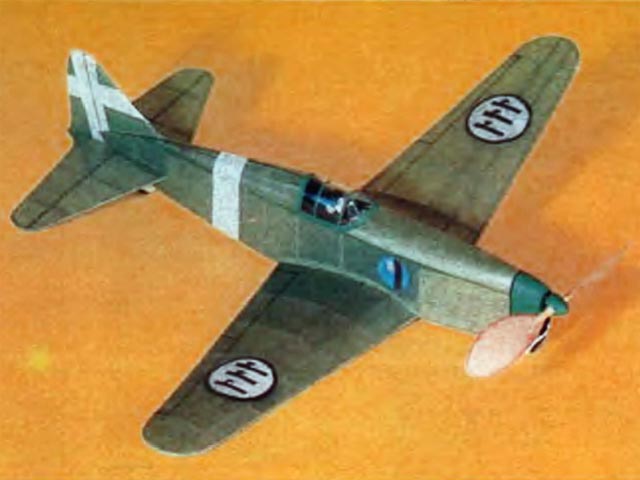