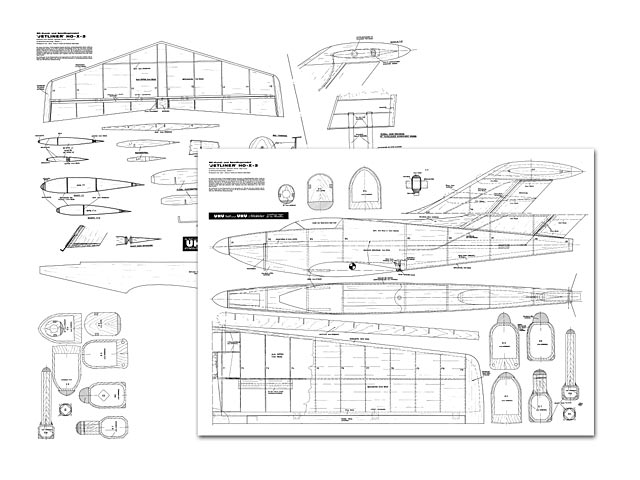 Quote: "Hello Mary, Steve, attached is a plan of a RC-model for sport and pattern flying, designed by Erwin Hoffmeister. It was shown in the German FMT magazin in August 1968, wingspan 1740mm and length 1390mm. The quite large model is for 10ccm engines.
The print size has been scaled to large plan version, even the text on the plan tells the opposite. And because of some misfits I did add a page with revised formers. But anyway this plan let some free space to be somewhat creative... kind regards,"

Quote: "Hi Steve and Mary, here is the article for the Erwin Hoffmeister´s Jetliner HO-X-3. Erwin was a member of the same flying club than I was, but I did not meet him for a long time. Regards,"

Quote (google-translated from the German): "The construction plan of the aerobatic and sports flight model 'Jetliner' enclosed with this booklet had to be reduced by 1/3 for printing reasons. The slightly smaller model built according to these documents has a wingspan of about 1200 mm and is ideal for sporty RC flights; it is controlled with a 2 or3 channel remote control system; Engine up to 2.5cc.

The dimensions given in the construction plan and in the following construction instructions apply to the larger original version and must also be reduced by 1/3 for the smaller model (round off upwards). Every second rib on the wing and tailplane can be omitted to save weight.

Two years ago there was a model at the German Remote Control Flight Championships that attracted less attention because of its sensational placement (often enough the skill of the pilot alone is decisive for victory or defeat; and its designer did not fly it himself), but had the admirers on his side because of its great lines and excellent flight characteristics. At that time it was simply called 'HO-X-3', was designed by Cologne-based Erwin Hoffmeister and was characterized above all by its raised tail unit.

Then as now, everyone who has seen it up to now is unanimously of the opinion that this 'Ho-X-3' is just the right thing for flight model athletes who do not rely on absolutely conventional and orthodox constructions are sworn in. We called the model 'Jet-liner' because it is not only reminiscent of the designs of the latest commercial aircraft, but also because it appears to us to be a typical representative of a type of aircraft model in the so-called jet age.

Erwin Hoffmeister has for his 'Ho-X-3'. our "lehner, u. a. pendulum rudders are also provided. We have indicated this option in the construction plan, which many experienced RC pilots will certainly want to use, but we would like to point out that operation with a pendulum rudder is only possible with the large original version is possible; the reduced model with a wingspan of approx. 1200 mm must be flown with a normal rudder.

Building Instructions: The essential dimensions, materials, material strengths and short building instructions for this model are given in the building plan, so that in many cases the dimensions are not given again in the following building description.

The fuselage of the jetliner is manufactured in the usual box construction. To do this, the side walls are first cut out (3 mm balsa). To strengthen the fuselage side walls, 0.8 to 1 mm thick plywood planking can be fitted on the inside between frames R1 and R6. It is essential to attach the reinforcement to the wing attachment between frames R3 and R5. The position of the fuselage frames is marked on the side parts, which are laid flat on the construction plan template. The frames themselves consist entirely of 3 to 4 mm plywood, it being noted that the rear frames (R6-R9) can also be made from 3 to 4 mm thick balsa plywood if they are not left out too much.

From the outset, care must be taken during construction that the fuselage does not become too heavy, especially behind the wing structure; this saves you having to add trim weight to the nose of the fuselage later on.

Balsa straps (triangular 15 X15) are glued to the rear of both sides of the fuselage between frames R5 and R9. Then only frames R3 to R5 are glued vertically to one of the side parts. The second half of the fuselage will later be glued to these raised frames. The remaining frames (R6 to R9) are then also fitted afterwards. The engine mount, consisting of two 8X10 mm thick strips, is then inserted and glued into the finished basic structure of the fuselage. Finally, frames R1 and R2 are fitted. The bracket for the nose wheel landing gear must be fitted to frame R2 (see sectional drawing, sheet 2).

The next step is the installation or fitting of the brackets for the remote control parts, which are designed differently depending on the intended system. The RC system is located in the space above the wing at frame R3 (see illustrations). The batteries are best stored between R2 and R3..." 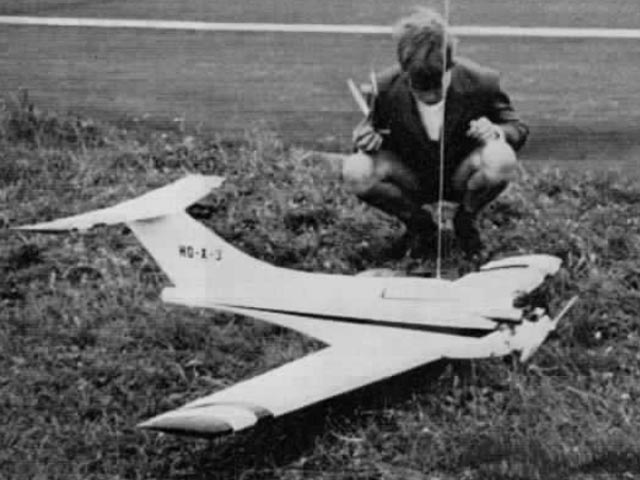 That robust T-tail reminds me of an Ekranoplan, perhaps Mr. Beriev saw this and adopted the shape.
Miguel - 03/07/2022
A vague (or certain) resemblance to the wonderful and innovative 1965 Tom Brett's TBX-1.
see: https://www.modelaviation.com/tom-bretts-tbx-1
Pit - 03/07/2022
Hi Pit, how is it humanly possible to remember the most remote things, and even worse be able to bring the right magazine article to back it up? :-))
Miguel - 04/07/2022
hi Miguel, I borned in 1964 from an Italian modeller of the 40'. Instead of playing football, I grow up looking at the old and new international model magazines collections before learning to read and building models since the age of 5. A children mind could easily store thousands of datas associating them to images. This is the trick but it's not possible for the adults, gradualy you lost this capability. Sometimes my dad used me as an inventory, " Pit do you remember in wich magazine there was the Canadair CL 215 plan?". "Sure!"
I'm more than a passionate I'm a modeller compulsive maniac, it dosn't exist a cure at the moment...
Pit - 04/07/2022
Hi Pit, If there is no cure now, then I hope they'll never find one :) I went through a similar course in life, my brother's aviation and modelling magazines initiated this extended love affair. I truly envy your memory, mine is as useful as a hole in the pocket :)
I want to thank you for your precious contribution to us, Outerzonians, you truly are a great help and a great guy as well!
Miguel - 04/07/2022
Add a comment