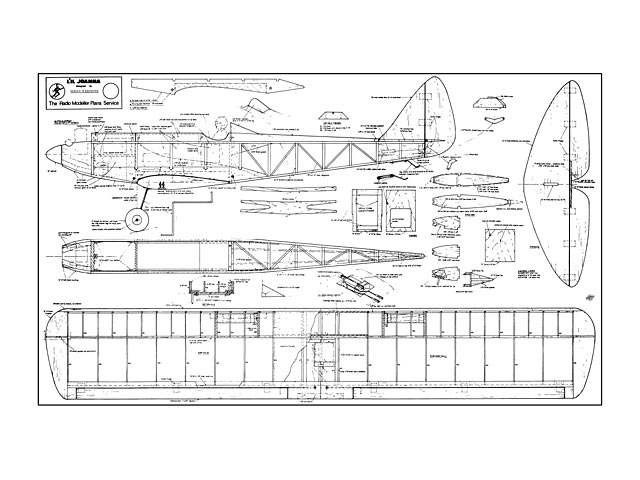 Quote: "WHEN I realised that I had become addicted to scale models, it also became obvious that I was doing much less flying. I think it needs a better gun, pilot, or whatever, was becoming three weeks work and no air-time.

So, it was a case of sitting down and designing something to just go out and fly with. Start with a spec. Power? .20 cu in, of course, span 48 in to fit the car's boot. Style - sort of old-time, cheap and tough.

However, the project became a little absorbing and a one-off ran to four versions and two years to arrive at L'il Joanna.

Getting it together: The fuselage is a plain openwork box, tough and quick to build with a light top deck and minimal cowling. Wings also are light and rigid. Please, don't try to make one from solid sheet and slabs of foam. I once saw an RM Sky Chief (oz8676) done like that, which turned an open-frame beauty into another plastic bomb. No excuses - this is a model for those who enjoy a little craftsmanship and a lot of flight.

All the wing ribs can be cut from balsa with the use of one ply template, with spar cut-outs as appropriate. The constant section, two inches of which are actually flat, makes building a true wing easy. Never mind the theory, it works fine.

I suggest building both panels completely, apart from the centre section sheeting, before joining. Putting tips, etc. on two foot panels is easier than on a four foot wing.

Use the type of torque rods that have a screw thread at their inner ends with a connector that can be screwed up and down, as this model is very amenable to fine tuning of control throws.

When built, the wing may seem very flexible. Don't worry as it is adequately strong for flight.

The 10g undercarriage likewise is on the strength through flexibility principle. Please don't try to beef it up.

The fuselage's purpose in life is to hold wings, tail and engine in correct relationship and keep rain off the radio! It looks a little complex but goes together quickly, with little tedious carving and sanding.

When I have the basic box together, I usually make up the 3/16 sheet tail feathers and trial fit the radio, when any problems can be seen easily. Try it, it is much easier than poking pushrods down a fully covered fuselage.

The tailskid is the simplest way of holding the tail off the deck I could devise. On a calm day taxying is easy, in the wind - well who wants to do downwind taxying anyway?

Incidentally, only the latest version has the 1/32 ply fuselage side doublers. The others had identical structures minus the doublers, these were only added because no one thinks you can live without them. If you want to save weight and money (and who doesn't) then the doublers can safely be dispensed with.

Installing the mechanics: The prototypes flew on various power from an old Thunder Tiger .25 (fine) to an Irvine 25 (wheel). A good loop scavenged 20 is just right, and we've all got one of them lying around. The position of the fuel tank can easily be adjusted to suit the level of the engine's spraybar during construction.

All prototypes of L'il Joanna used 500mAH Ni-Cads and standard servos. The battery can go under the tank and the radio bay is, to say the least, cavernous.

For the aileron control, the servo was mounted horizontally which created the minimal protrusion into the radio bay. All prototypes used closed loop rudder/pushrod elevator controls as per the plan. No great white horns on my models!

The receiver aerial can run down a drinking straw tube inside the body..." 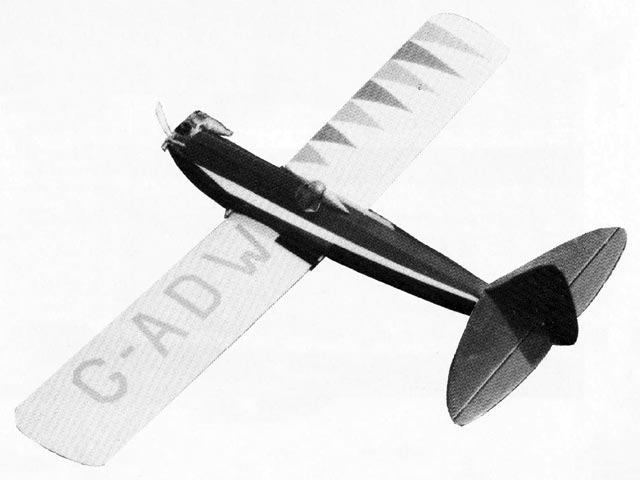