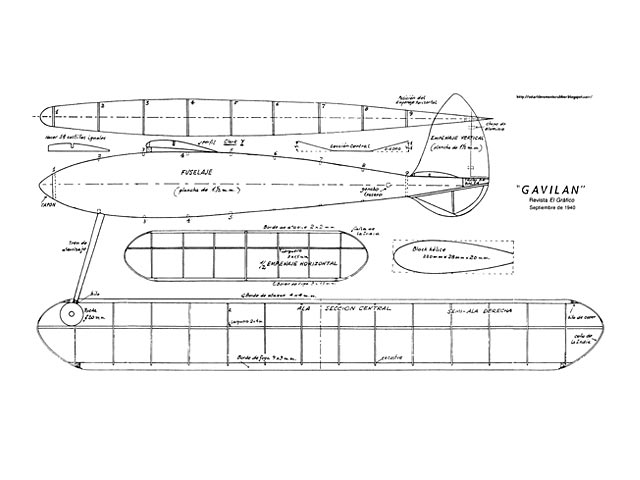 Quote (google-translated from the Spanish): "Its ease of construction, robustness and good flight define it as the ideal 'all-round' model; the one we all like to have, to fly on any occasion and in any weather. Even if it is treated badly, it will last a long time. The plan is drawn at full size and will conclude the next issue.

Fuselage. Transfer onto 2 sheets of 1 mm thick the outline of the fuselage, using carbon paper; both sides are cut and sanded at the same time so that they are the same. Care must be taken that the thickness and hardness of the sides are exactly the same.

The crossbars are cut, whose measurement is indicated in the top view of the fuselage, and glued in the position indicated on the drawing with numbers. Beams 4-4, 5-5 and 3-3 will begin to be glued and the rest will continue to be glued up to the rear block, and finally Nos.1 and 2 will be glued. The beams can be held in place while they are dried with pins; they are placed directly against the side plates, without any socket. The dotted numbered Coadraditos should not be confused with inserts, since they only indicate the position of the crosspiece. The front cap is built and the hooks for the motor rubber are placed (3 strands of 3 mm x 3 mm).

Wings: Make a template of 1 mm sheet metal thick, with carbon paper the profile of the wing, 14 ribs are cut with a jigsaw, and they are all held together with a clamp or with two crossed pins to sand them at the same time and thus obtain them exactly the same.

The wing is assembled in three independent sections, a central part and two semi-wings. First, the ribs are glued to the crossbar by the inserts, working on the plane to maintain the separation that exists between them, then the leading and trailing edges are cemented and when they are dry, they are rounded and refined, respectively, with tracing paper. sandpaper. The marginal edges are Indian cane; they are placed with plenty of cement and tied with sewing thread.

Empennage: This is drawn with carbon paper tonic the rib and in the same way that it has been done with the wing, they are cut and sanded. The edges and the crossbar are glued and the leading edge is rounded and the trailing edge is refined. The upright is cut from a 1.5 mm sheet metal. and the mobile part is linked to the fixed wing with aluminum 'hinge'.

Propeller: This is built from a block of hard raft of 220 mm x 28mm x 20 mm and is balanced in the usual way. The support is of the 'free wheel' type.

Landing gear: It has independent legs made of hard balsa wood and ends of steel wire: the lower one serves as an axis for the wheels and the upper one is used as a union to the fuselage..

Covering: Covering the fuselage is the simplest part of the entire construction; the wings are covered in four parts: the first is the one between the ribs called A, on the upper face (extra-two); second is from rib A to the right marginal edge: the third ditto ditto, but for the left semiwing, and the fourth the entire intrados or underside of the wing on a single piece of paper (Japanese paper, naturally). All surfaces coated should be sprayed with water. Once dry they should be doped with a soft brush and evenly; the wings are so robust they are little susceptible to twisting.

Fliying: The model is mounted, the wings are held with a band of 3 mm x 1 mm rubber, the motor rubber is installed and the model is launched slightly downwards towards the ground and with momentum, holding it by the fuselage at wing height; if it lands on the tip (pica) the wing will move forward; if on the contrary it lands on the tail, the wing will move backwards. If it leans over any of the wings, the one that is lower will be relieved or some weight will be placed on the opposite wing.

Once the glide has been tested, give the propellor a few winds and launch the model against the wind, if it gets too angry the propeller axis will tilt downwards and the incidence can be reduced somewhat, preferably the propeller will be drilled and lubricated the engine rubber." 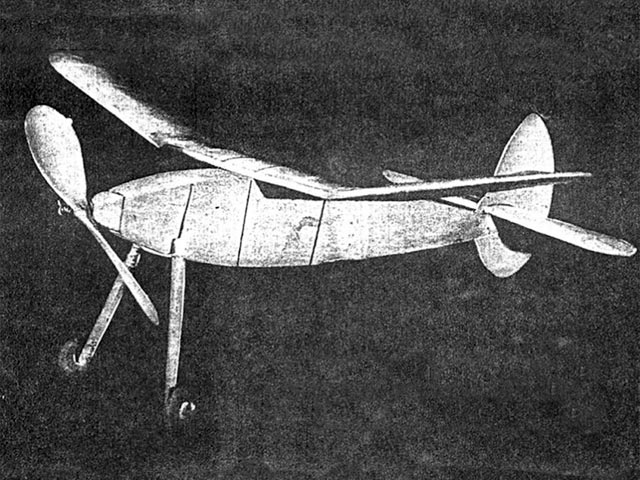