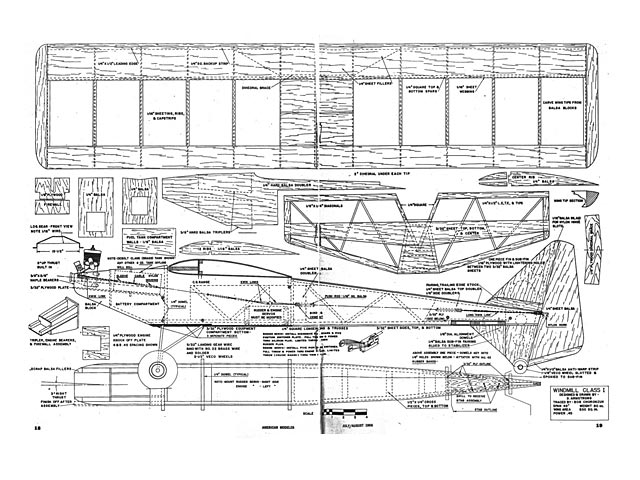 Quote: "For Class I competition the theoretical maximum score is 90 points for a single flight. There aren't many Class I fliers capable of cracking 50 points. There are only about a dozen litho pass the 60 mark. One reason for the low scores is the lack of up to date competition designs and kits for Class I.

As soon as it appeared that multi equipment would be allowed in 'rudder only' I began a series of models dubbed Windmills because of the large engine (large by accepted standards). Each of the series of five performed better than the last. The Windmills have given me a couple of successful seasons of competition flying.

The credit goes to the plane. My job as a research group leader all but eliminates the practice time so necessary to retain that precision touch. Designing and modifying the Windmill with a judge's guide in one hand has resulted in a lot of built-in points to compensate for my lack of practice.

The Windmills were developed specifically for Class a competitopn. The concept that Class l is for beginners was completely ignored. The plane is a breeze to fly, but as presented it is too responsive for the beginner. (Beginner's and Sunday fliers see end of article.) As shown it is capable of excellent scores on all AMA maneuvers which do not require inverted flight. The Windmill will never make the perfect 90. score, but it should add many points to the competent Class 1 flier's score.

A glance at the plans will probably startle the experienced RC modeler. That 49-inch wing is all the plane needs. That is a K&B .45 shown on the plans. An explanation of some of the features of the Windmill follow.

High Wing Loading (22 oz/ sq ft): I like to fly. I don't like to wait for calm weather. You can't afford to wait at a contest. The faster flying speed of the high wing-loading eliminates the objectionable floating, rocking. and ballooning associated with average Class I planes.

Forward CG (25-27.5%): In addition to being an essential companion to high wing-loading for wind penetration and speed, it gives a flat recovery from looping maneuvers.

Low Power Loading (5 lb plane: 0.45 engine): Your nine minutes go by too fast without your wasting time climbing to altitude for maneuvers. With a low power loading it only takes a few seconds to get a couple of hundred feet.

Up Thrust (4-5°): Coupled with low power-loading, the up thrust enables this plane to do loops, cuban eights, rolling eights, etc, from essentially level flight. If it doesn't the plane is over five pounds, the engine is shot, or the CG is improperly located.

Wide Landing Gear: The wide gear is necessary to prevent blowing over while doing a proto taxi in gusty weather. The non-rolling tail wheel is an effective drag brake and makes the taxi straight as an arrow. Bounce is the result of releasing energy from a landing gear or tire flexed by a rough landing. I get good results by using a rigid gear (note the spreader bar on the plans) and almost flat tires.

Rudder Size and Plaegment: All we have is a rudder to work with, so let's get the must out of it. Make the rudder area big in relation to the fin, and put it on the bottom..."

Quote: "Hello, The Windmill has intrigued me for decades with its purely functional lines, 5° upthrust and its purported flying qualities. I finally built one this spring at 2/3 scale with electric power and found that it does indeed behave as described in the original article without necessitating any adjustment.

It is a quite a thrill to be able to loop this rudder-only model from level flight and flare the landings with a short burst of power. A build thread in which is described a useful modification to the transmitter throttle lever is here: https://www.rcgroups.com/forums/showthread.php?4101723

A real fun model with many coming flights. I hope the attached plan quality is sufficient for inclusion in the Outerzone collection. The Windmill deserves the recognition. Also attached is a scan of the original article and photos of my rendition of this model [pics 003, 004, 006]. Best modelling regards,"

Note the main plan file here is quite low res. It is full size with wingspan 49 in, but only in greyscale at 200 dpi. If anyone can submit a clearer scan of this plan, that would be great. This is an interesting design, and a clearer plan would be good to have. Thanks, Steve. 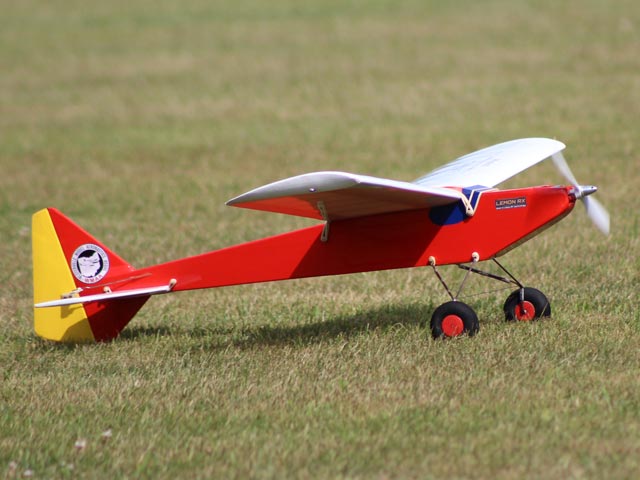 Hello, Two more photos of the Windmill showing it ready to take to the air [main pic] and in the air [007]. The occasion was the 3rd Ohio Waterfront Gathering last week-end. Best modelling regards,
Jean-Marie Piednoir - 29/06/2022
Add a comment