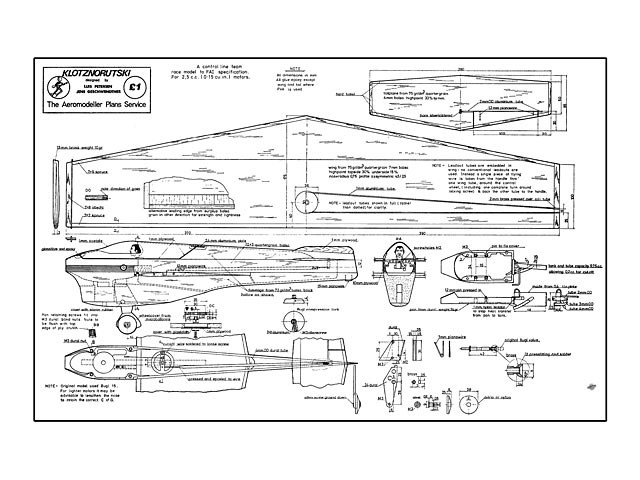 EVOLVED OVER A two year period of intensive flying, this is the seventh such design that we have flown - each one being better than its predecessor. By 'better' we mean that it is faster, lighter, easier to construct and has better flying characteristics to cope with the frequent strong winds that are encountered - and of course 'hard' races. All the models have been tested in a wind tunnel in order to compare drag characteristics etc, and so all the improvements have been tried and tested in a controlled, reliable, environment.

In the sport of FAI class team racing, the model building really starts with selection of an engine. We have tried most makes - even made them ourselves - but in order to have time to make and fly models, we have found that the Bugl engine, in its standard form, is the best choice. It can outperform most other engines, but they are not easy to obtain.

Our engines, when fitted with a 3.1 mm internal diameter carburettor all do 16,200 - 16,300 rpm when fitted with a 8 x 8 blue Kavan prop in weather conditions of 15°C, 760mm Hg, humidity 45 per cent. However, we have seen some Kavan props that are 600 rpm faster, so be careful when the talk is about rpm figures. The only changes we make to the engines are to fit aluminium bolts, a compression lock and modify the filler valve as specified on the drawing.

Until now we have seen no effective way to improve a Bugl, except by reducing its weight. The only weak point seems to be the cut off spring, which can be pulled out of shape if the bellcrank gives too much down movement.

The pan is made from dural and not aluminium, because of its greater strength/weight ratio, and because the threads are less likely to strip. The tank is made from 0.4mm steelplate to avoid blowing out during filling under pressure. It is made to the correct capacity by filling the tank and tubes with 6.76ce of paraffin before the end plate is fitted. The level is then marked and the end plate tapped in to this point and then soldered. We do not like to 'squeeze' the tanks down to capacity as it just might blow out again when pressurised. The tank is mounted on the pan with two 2mm screws, using a piece of nylon in between to insulate it.

The filler valve and cut-off are Bugl original parts, and we have not yet found it necessary to insulate it, although it is possible that it might improve the handling if the engine is worn.

The reasons for our sprung undercarriage are that on take-off you need a wheel well forward to avoid nosing over and clipping the propeller, but on landing you need it around the centre of gravity, so as to be able to make fast landings without bouncing, even if the ground is rough. This type of undercarriage provides just this compromise, and is easy to make and install. The pivot screw is a 3mm Allen head screw, secured with epoxy and faired in with silicone rubber - be careful not to fill the hole for the Allen key with epoxy, as this will make replacement difficult.

The wing is made as specified on the plan - the alternative leading edge can be used to make it stronger (more 'crush resistant') at the cost of spanwise strength. Grooves for the aluminium lead-out tubes are made by cutting out the whole section, making the grooves into the sides..." 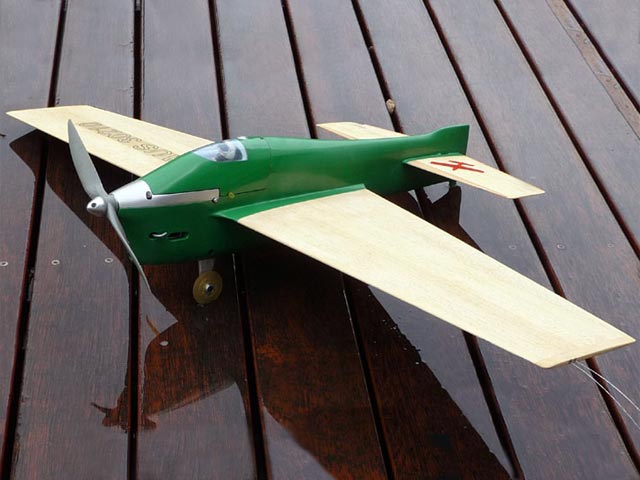