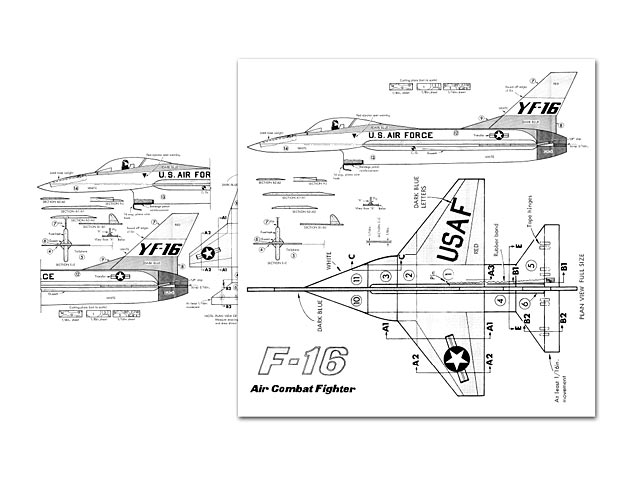 THE F16 fighter really hit the news when, following its appearance at the Paris Air Show, orders were placed by no less than four NATO countries - much to the annoyance of the European aircraft industry, the French in particular.

No doubt this degree of publicity impressed the design in my mind, and when my eight-year-old son decided that he wanted a semi-scale model to make for his Cubs Hobbies badge, it seemed a good choice. Why? Politics apart, the F-16 is a really straightforward, compact design which easily lends itself to adaptation as a catapult-launched. glider. Also, the bright colour scheme of the two prototype machines is most attractive and easily applied - important points when designing a model for youngsters, as is the fact that it is economical in the use of materials. Two models can be built for a cost of around £1.

Keen observers will note that the original design has been modified somewhat in the interests of simplicity and flyability - for example, a flat tailplane with an elevator is used instead of having two differential, all-moving, anhedralled 'tailerons', while belly fins and missiles have been left of before they get knocked off.

Construction 1. Measure the plan-form of the aircraft, then draw out parts 1, 2 and 3 twice full size onto a sheet of 3 in wide 1/8 medium hard balsa as shown. Cut out with, a sharp balsa knife, using a steel rule as a straight edge. 2. Assemble and glue parts 1 and 2 together. 3. Again, double up the dimen-sions of parts 4, 5, 6, 10 and 11 then draw onto a sheet of 1/16 balsa. Part numbers 7, 8 and 9 may be traced directly from the side elevation on the plan. Arrange on the sheet of balsa as shown, and cut out 4. Shape outer wing to sections..." 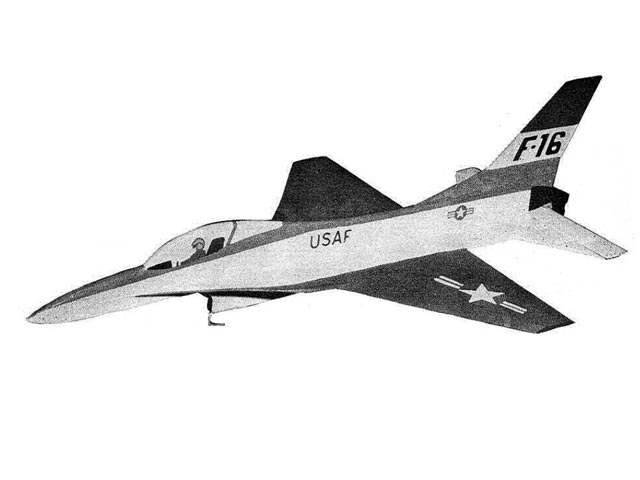