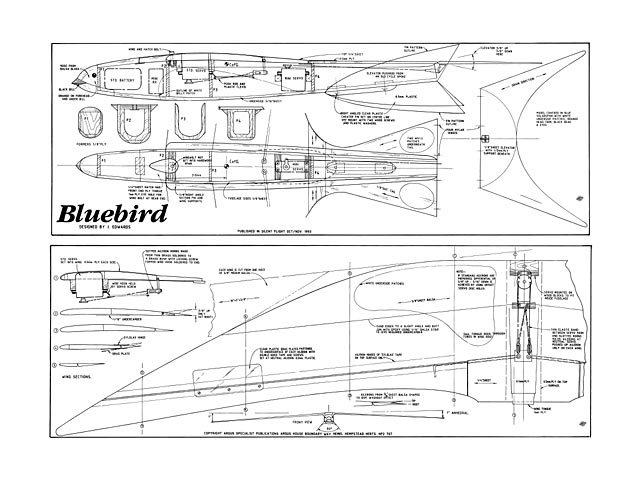 The layout for the design evolved whilst watching swifts wheeling about in the evening air from the balcony of our hotel in Fuengirola back in 1990. I sketched out a single wing that could be made from one piece of 3 x 36 inch balsa sheet, by cutting it across at an angle and joining the two pieces together, plus an additional trailing edge as an aileron.

As the cheap brandy quickly evaporated from my glass the design became very simple - curved anhedral wings and reflexed ailerons with lots of differential, a flat forked tail and an inverted Vee clear plastic cheater fin underneath, super! On returning home I soberly put the idea on one side for a while, then after the success with 'Eddie the Eagle' I decided to give it a try.

Building: The construction is fairly straight forward and it is all in balsa sheet. The two wing pieces have undercamber of 1/16 of an inch (1.5mm), achieved by putting a strip of balsa under the joint when gluing the two halves with epoxy. Each aileron is shaped using a razor plane. Make them flat on the bottom at the root and flat on the top at the tip, be sure to make a right and left aileron.

Flying: I found that the performance on the slope was quite good. The aileron control did give some yawing, and with its slim shape you do have to keep your eyes on it. The white markings under the wings and body do help with orientation.

Differential was used on the ailerons at first, but after changing to drag plates and slotted horns with up aileron only, the control improved ie no yawing.

The finish is blue Solarspan with white under patches and head markings. It definitely looks different in the air. Although I would not recommend it as a first aileron model, it is easy to mend as I found out after a flyaway one windy day on the slope.

The Hawk: The Hawk uses the same fuselage and differs only in the wing and tailplane. The wing is 'gulled' and requires a spruce spar, the differently shaped tail feathers pose no problem. A sketch is included which should allow you to modify the Bluebird plan to make the Hawk. The current Hawk is painted to resemble a Peregrine Falcon." 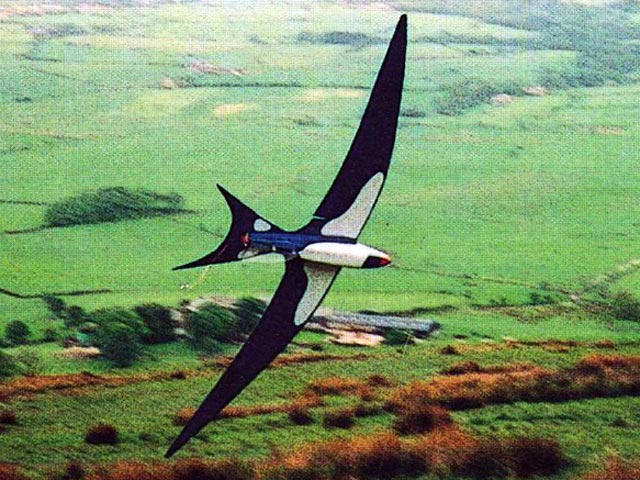