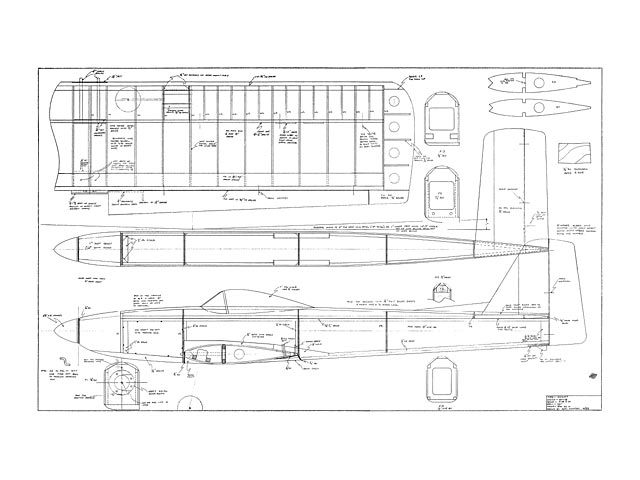 Essentially an enlarged version of the Saker (oz6267) design. For 60 engines. Previously unpublished.

Quote: "Steve ...I also designed what was a .60 size Saker that was never kitted. You could change the shape of the tail, wing tips, canopy, etc to look like different WWII era fighters. I called it the 'Fun Fighter'. I still have the first one I built. It has the same great flying qualities of the Saker. Local modelers scratch built over 6 of them from my plans in the mid 80's. One of them actually built the fuse to look like a big Saker. I used the airfoil from George Aldrich's Flight Streak control line models on all 3 designs. It's a great airfoil with a benign stall and a very wide speed range."

I drew the plans for the big Saker, AKA Fun Fighter, about 4 years after I sold the [Solution Aeromodel] business to Ron Booth. Ron started an engineering firm around 1982 or 3 which kept him too busy to make kits. They did release another kit called Santee if memory serves that was a simplified Saker. Read that same wing with an ugly fuse. They sold the rights to a Bill Polk who moved to Kansas and passed away before he made any of the kits. So ended Solution Aeromodel Company.

I've attached some pics of my Fun Fighter [mainpic, 003-005]. It made its first flight in January of 1985. It has retracts and weighed 7-1/4 pounds. The large wing gave it an 18-1/2 ounce per foot squared wing loading. It was fully aerobatic at half throttle, but could do full throttle pattern aerobatics with no trim change. Thanks I think to the airfoil I copied from the Flight Streak UC models. The tuned pipe came later on the Super Tigre X-61 ABCR.

I flew it for 6-1/2 years. It was traded to a customer of mine (I owned a Hobby Shop from 3/87 to 7/2007) who flew it for several years and sold it to another customer of mine. I traded that customer a 7 CH Airtronics receiver for it in 1999. It has been in the rafters in my shop ever since and needs to be recovered. Which I intend to do someday. A trip back in time to put it in the air again. It still has the piped ST X-61 in the nose. Cheers, Stan J." 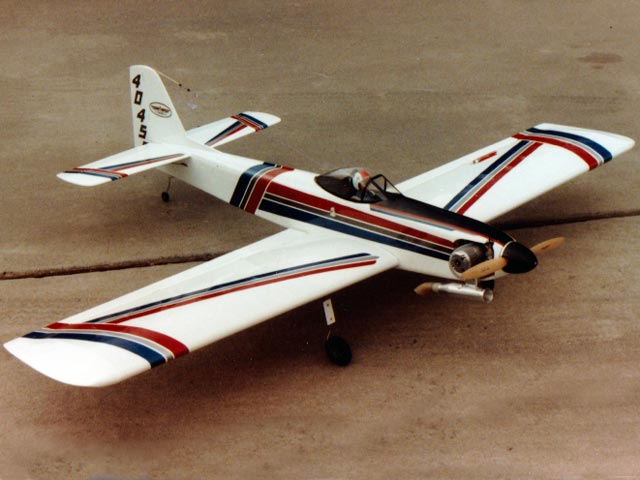