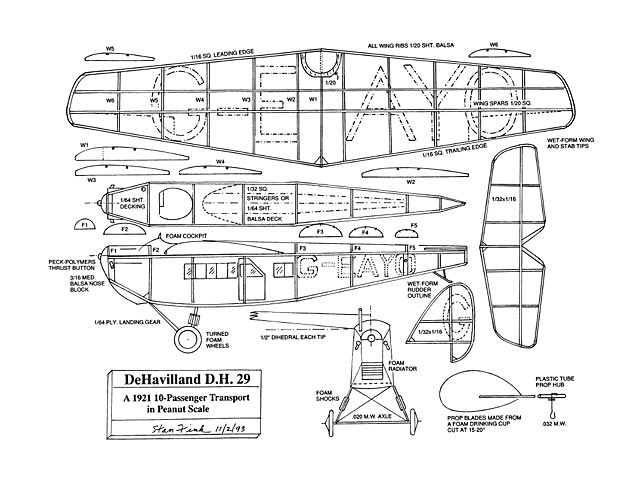 Quote: "DeHavilland DH.29. As a full-size aircraft, the DH.29 was a dud, but has the necessary design features to make a fine flying Peanut Scale model. By Stan Fink.

The DeHavilland DH.29 was a 10-passenger transport monoplane built in 1921. It had a span of 54 feet and carries the distinction of beingthefirst British aircraft with thick-section cantilever wings. The cantilever design reduced drag and was to become standard in modern aircraft.

Because of engine vibration and ground control problems, only two DH.29s were built. The first was a military version and the second, G-EAYO, the subject of our Peanut, was a civilian type. Daimler Hire, Ltd. abandoned the DH.29 for the DH.34 biplane when it decided it couldn't overcome the airplane's problems. Neither of the DH.29s saw service, and both were later subjected to an extensive test program designed to better understand the characteristics of thick-section cantilever wings.

The D.H. 29 is one of those planes which were fairly useless in real life but which can still become winners in modeling. Its long fuselage, low aspect ratio, high thrust! ine and unusual details make it an excellent choice for a Peanut. The only deviations from true scale are the wing dihedral and slight enlargement of the stab and rudder. Special thanks go to Dave Stott and Lin Reichel for the documentation and for confirming the color scheme as overall red with white insignia.

Construction: I always build the fuselage first, so let's start there. This one is a basic box with five formers added to the top. Wet the bottom longerons to prevent springback. The first bay in the bottom longeron is a straight stick spliced and glued to the curved section.

When gluing the two sides together, recess the third and fourth crosspieces about 1/8 inch to allow for the dihedral in the wing. Cut out the fuselage formers, but don't notch them yet. Trial fit and sand them before gluing..." 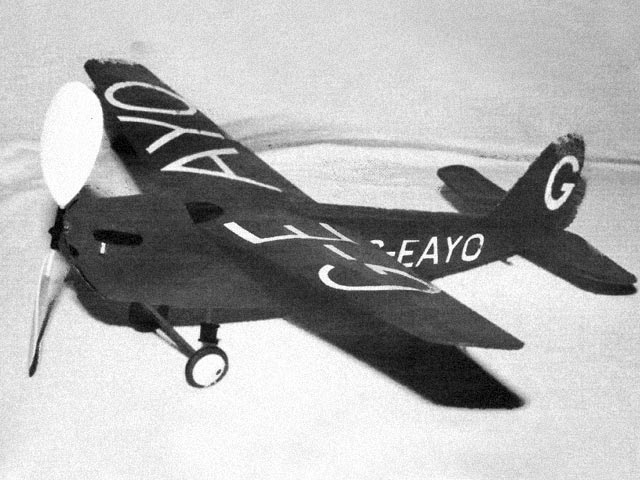