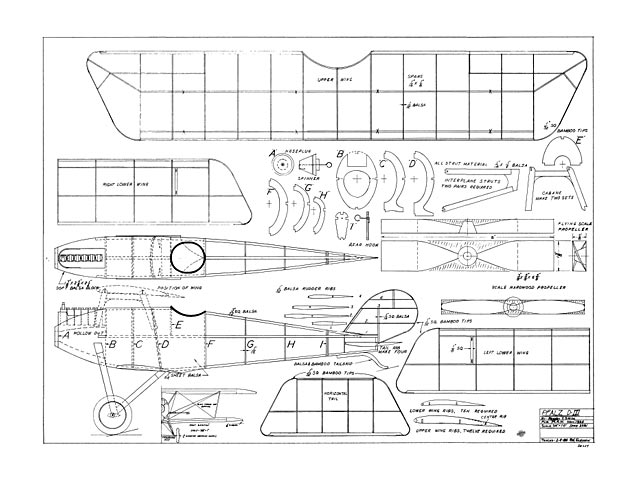 Quote: "Build and Fly the Pfalz Pursuit. By Robert V Smith. How You Can Construct a Beautiful Flying Model of a Famous German Warplane.

Along in 1917, the Germans brought out a very clean-cut biplane known as the Pfalz D-III, a miniature prototype of which is presented herewith in three-quarters inch to the foot scale. With its powerful Mercedes engine of 160 horse-power, this sleek streamlined machine flew at the rate of about 120 miles per hour for its top speed and did around 103 miles per hour at 10,000 feet. The rates of climb were fairly good ; it could climb to 5,000 feet in less than seven minutes and could climb from sea level to 10.000 feet in seventeen minutes. As to its flying characteristics, the plane was laterally stable but had a tendency to turn to the left directionally. It landed easily and was not a hard ship to fly, being very maneuverable in combat.

This model appealed to the author because of its comparative scarcity in model circles and general adaptability to being modeled to give an excellent flying scale model. The three-quarters inch to the foot scale is a good one, giving a convenient size. The material won't cost much for the plane and it is well worth while to spend a little time on the Pfalz and then have a lot of fun flying the model. We'll get started right away; here goes for the fuselage.

Fuselage: Cut all the fuselage bulkheads from 1/16 medium balsa except numbers C, D and I which are cut from two Ile sheets cross-grained to give them additional strength. The nose block is made out of a soft piece of balsa measuring 1-7/8 x 2 x 2-1/4 in; this should be carved carefully and sanded smoothly. Hollow it out but don't make the walls too thin because the model needs the weight up there in order to balance properly. The nose plug 'A' fits onto the nose and should have a washer cemented on front for use as a bearing for the propeller.

Select four smooth 3/32 square medium balsa longerons and assemble the fuselage in the usual manner for round fuselage jobs. Use a good grade of model cement for cementing the longerons into the notches of the bulkheads.

Two wing root ribs of 1/8 stock are next cut out and glued in place as shown in plate 1; they are glued on the lower ends of formers C and D. Be certain that they are true as the position of the lower wing is determined by them. This next task isn't really as difficult as it looks but does take some patience. Some thin balsa sheets are cemented on formers B, C, D and F ; have the pieces overlap only slightly. After this is done, sand the whole job lightly and make sure the joints are all secure. Refer to the photographs for additional information.

Small balsa cylinders are now cut out and glued in the front block giving the effect of a dummy engine; little pieces of 1/16 square sticks help with the effect. The front shield is made from thin sheet material or metal may be used and this is glued in position..." 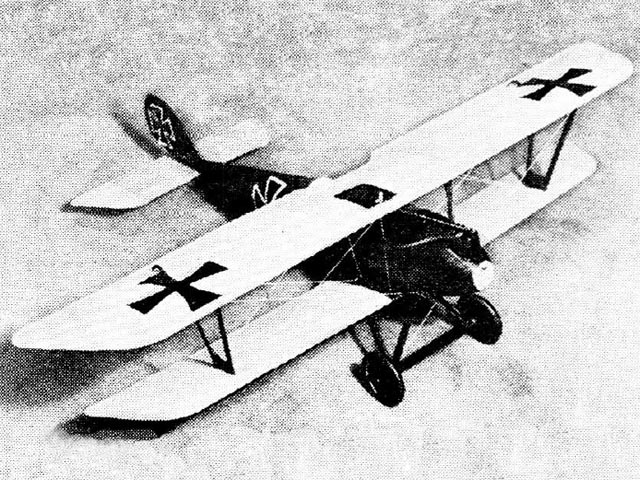