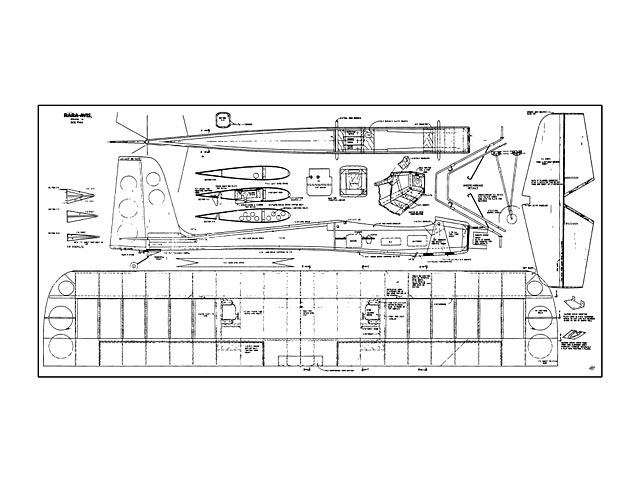 Quote: "BEFORE COMMENCING A description of the model a little background history may be of use: In 1975 I restarted my modelling career after a few years lay-off for college, courting and marriage I joined the local Gravesend Aeromodelling Club who had always been at the forefront at organising club and inter-club fun fly competitions. At that time our most competitive flier was a chap named Brian Patterson (are you still modelling, Brian?) who generally flew two types of model in fun fly competition, the first an Aeromaster (oz1971) biplane and secondly a 'Wot-Not', being a 25-40 powered monoplane designed by Chris Foss. Both models were built as lightly as possible and powered by the most powerful and tractable engines available at the time. The Aeromaster used an OS 60FSR, the Wot Not an OS 45FSR both used tuned pipes.

These were very competitive but nonetheless both had their limitations. The Aeromaster was large and light, but not light enough and slightly underpowered for my needs. The Wot Not was a 48 in span fast monoplane. It could be built with a very high power to weight ratio but difficult to slow down due to its slippery form, this made touch and goes and limbo comp's very interesting on calm days!

Having built both these models, many others besides and practiced for many hours, I became reasonably successful in our local fun fly competitions. However, it became increasingly clear to me that no model had yet been designed that fulfilled all my requirements for competitive fun fly models.

Those requirements were as follows:

1. Reasonably compact so that it fits in the boot of the car. This leaves room in the car for wife and family. This is very important if I am to be allowed out as often as I wish. 40-45 size models are usually more agile in tight manoeuvres simply because of their smaller size and there are many very good quality engines of this capacity.

2. Lightweight for maximum manoeuvrability and very forgiving light characteristics with use of a relatively large propeller (I use a 12 x 5 Zinger) for very rapid acceleration and controlled deceleration. I have tried many different types of air brake and flap and split rudder but none are so effective as a light model with a large prop.

3. High power to weight ratio for maximum acceleration and climb. However, light weight is more important than high power. If you put a large engine on an already heavy model the combination of extra weight and extra power will make the model even more difficult to handle. THERE IS NO SUBSTITUTE FOR LIGHT WEIGHT. The complete model ready to fly with OS 46SF and tuned pipe weight 3 lb 12 oz.

4. Good control response and a predictable stall. I use large control surfaces with smallish movements. This gives smooth control in normal use but with the option to use a boot full in an emergency. The ailerons are set well back from the wing tips to reduce the risk of a tip stall. (With a fun fly model most tip stall tend to occur when turning from the down wing leg to the final approach (too low and too slow). If you open the throttle to quickly at this moment the usual result is for the model to flick into a torque induced snap roll and hit the deck at full throttle. 'Vantage' is the seventh model I have designed for fun fly each one an improvement on the next. I have done my best to design out this tendency to snap roll.

Construction of the model is basically very simple so I will restrict my comments to a few notes. Firstly, never forget the golden rule and keep it light. Avoid beefing it up use good quality and light balsa. Use cyano glue wherever possible. Note there is no ply in the wing construction except two twin doublers to avoid the elastic bands crushing the wings. If you're faint-hearted you could add a 1/16 wing brace but don't add anything else.

I use one servo in each wing, I find this much more positive than the usual linkages and just as light. With the advent of the cheap standard servo the cost should not be too prohibitive. I don't recommend you use foam wings unless you are able to construct them very lightly. I doubt if, even then, they will be as light and strong as a built-up wing. My wing weighs 12 oz when totally complete including all covering and servo..." 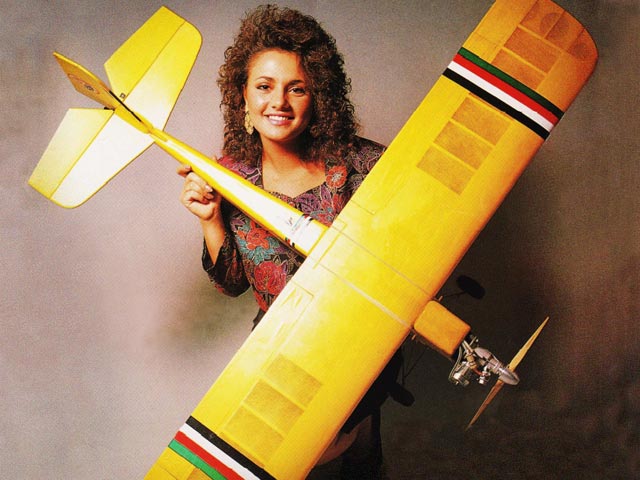