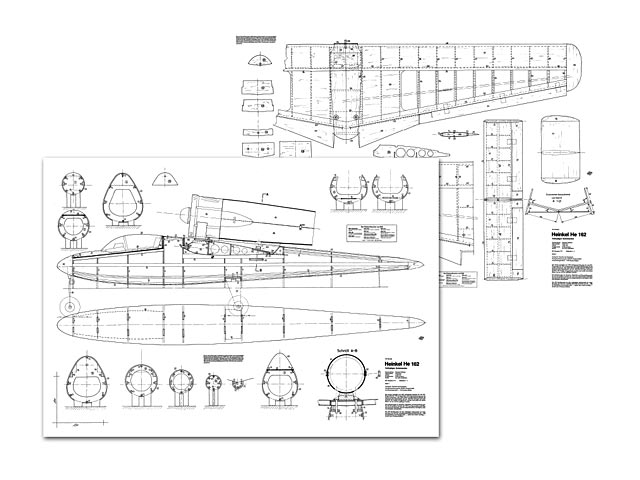 Quote (google-translated from the German): "Heinkel He 162 Volksjäger Salamander, by N Gallena.

While the original 'He 162' is a purely German development, this model is the result of German-American cooperation. For years our association has maintained very friendly relations with the local model flight club of the American soldiers. And so one day the chairman of the 'Kitzinger Aeromasters', Loris J Smith, handed me a box with an impeller engine and asked me to come up with something.

After seven months it was ready, the Heinkel He 162. I drew the plan and Loris did the shell construction. Finish, system installation and the test flights were my job again. The motor (6.5 cc) drives a five-blade impeller with a diameter of 120 mm and runs in a tube with a maximum outside diameter of 134 mm. It is mounted on an aluminum casting that is bolted to the outer tube through the six guide vanes. The rear end is formed by a streamlined cone, which is bolted to the aluminum casting. A spinner, which has a groove for starting with the V-belt, serves as the front end.

The entire engine is mounted on the model with a retaining fork and a strap. According to the operating instructions, the fuel should be supplied via a fuel pump and a tank outside the engine. However, I made a brass hammered, streamlined 125cc tank which I bolted on in place of the rear end cone. For practical testing, I mounted the engine on my old high-wing aircraft. For the start I used the engine mounted in the nose, the impeller engine was throttled.

At safety level I throttled the front engine and gave the impeller full throttle. The model lost some altitude, slowly gained speed and in the end was a lot faster than with the normal drive. My initial skepticism was gone. The model flew excellently despite a take-off weight of 4,100 g and the braking effect of the throttled front engine. From the sound alone, the impeller is a pleasure... " 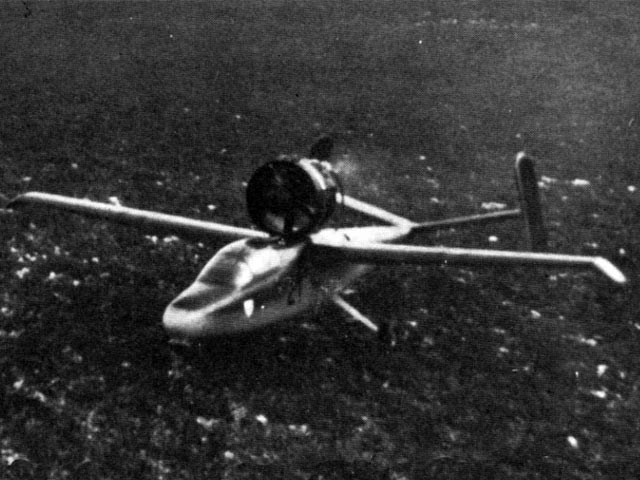