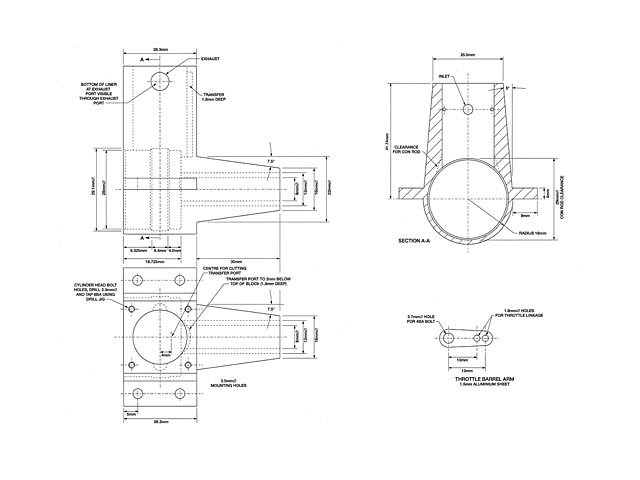 "Attached Warbler plan and articles. I am happy for these to be posted on Outerzone. If anyone wants to let me know they are building an example, my email address is jtow1234@gmail.com. Kind Regards, John"

Note the Warbler plan and article was published in both RCM&E 1997, and then in Model Engineer, May 1999.

Quote: "The Warbler. John Towell introduces his design for a quiet running, vintage style small diesel engine with throttle control. His good advice and description of its manufacture should enable anyone interested to produce a successful working power plant.

Part 1: Lucky breaks. The Warbler is my first design and the second model arcraft engine that I have built. After many years thinking that I would never be able to make an engine that worked I have discovered that it is not so difficult. This article will explain how to make your own engine by showing some of the operations. I will also mention a few ways of getting help and advice. Hopefully this will encourage more people to have a go. The satisfaction achieved when you start an engine which you have made is worth all the effort!

Model aicraft engines have fascinated me ever since buying my first engine, a DC Merlin, over thirty years ago. I well remember the excitement when, after hours of struggling, I finally managed to start it. During my teenage years I became quite good at making model aircraft and learnt how to get the best from their engines. Eventually I dreamt of making my own engine but I had no access to metal working machines and my standard of metal work was not too good.

About ten years ago I bought my first lathe, a 'very' second hand Myford ML7 and, with a limited degree of success, attempted to make odd bits to repair or modify engines. I had no experience of lathe work and every time I made something the results were poor, often because I was using blunt cutting tools at the wrong angle and speed. But for two lucky breaks, at this stage I would have given up on my dream.

First, my employers based me in Sydney for some weeks and while there I visited David Owen who is a great model aeroplane engine enthusiast. David had recently designed a very nice 2cc diesel engine for home construction, called the Owen Mate (oz13710) which used a special aluminium extrusion for the crankcase. David kindly showed me how the engine was made and gave me a set of drawings and an extrusion. The instructions were clear and comprehensive and I read through them several times, but the extrusion sat on my bookshelf for a long time, as I was afraid to start construction in case I ruined it!

The second lucky break was when I discovered that Guildford College ran workshop appreciation classes. I enrolled at the college and this turned out to be a significant step forward. The classes started with small projects to teach the basics of using a lathe and milling machine. There was a wide range of ages and abilities in the class and everyone was helpful and friendly. Students progressed at their individual rates and very soon I felt confident enough to have a go with the Mate.

There was access to a wide range of machine tools, sound advice and plenty of encouragement. I felt optimistic.

As work progressed, I still made plenty of mistakes and several times had to start a part agaln, but the engine was finished after six months of spare time effort. I was very pleased with the way it looked and amazed when it burst into life almost immediately. I fitted the Mate to my trusty old Junior 60 with three-channel radio and the 2cc engine flew it nicely. I entered the Mate for the Model Engineer Exhibition at Olympia and was pleased to be awarded a Very Highly Commended certificate.

After flying the Mate for a while I decided to design my own engine to better suit my needs. My aim was to build a vintage style diesel with throttle control that had a little more power than the Mate and which was much quieter. The engine was to be made from the solid with no requirement for castings and use similar construction techniques to the Mate.

To achieve this I increased the capacity to 3.5cc and designed the engine for relatively low speeds with the side port layout and moderate port sizes. This has proved successful as the engine starts easily and turns an 11 x 6 in propeller with plenty of power and moderate noise levels. After it had run a few times I decided to call it the Warbler. The throttle is very effective with a low steady idle and good pick up. I intend to make an exhaust system later to reduce the noise levels even further..." 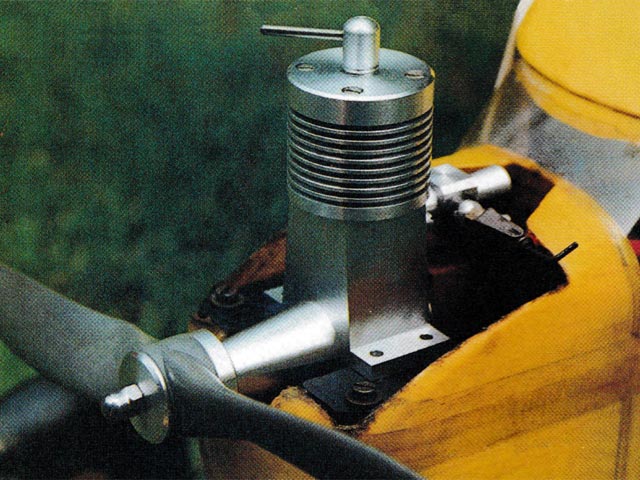