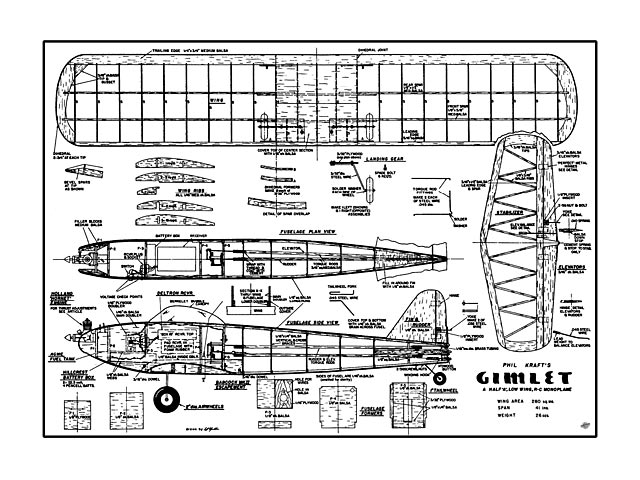 Quote: "Low wing RC models have been made before - to be different. This one pays off in performance. Gimlet, by Phil Kraft.

In the free-flight contest aircraft, flight control is inherent and predetermined by the aerodynamic force layout. Conversely, the radio model should be designed with only a safe minimum of inherent control so the flier can easily make the aircraft do his bidding. With this important distinction in mind, the Gimlet was designed as a low-wing, not for the sake of being different, but rather because this layout seemed to offer the following characteristics sought by the designer:

1. Smooth steady flight with automatic stall recovery, and resistance to ballooning. The high thrust line, well above the center of resistance on the low wing, greatly improves stall resistance and flight smoothness.

2. The ability to circle either right or left, without use of rudder to hold the model in the turn. Here the low-wing's lack of true directional stability becomes an asset.

3. Smooth turns without the nose dropping. The center of gravity above the center of resistance helps as it tends to flatten the turn.

4. Smooth take-off and landing characteristics. The low static mass and cushion of air between the wing and runway, along with proper position of the landing gear, insures this.

5. Good maneuverability. The center of gravity, being very near the center of lift, insures this characteristic. The model does not roll out of loops and is easily stunted.

Hundreds of test flights on the first Gimlet proved that the model combines all these characteristics with a steadiness and smoothness that would do justice to a much larger and heavier model.

Only minor aerodynamic changes were made in the second version of the Gimlet presented here, but many changes were made structurally and in the layout of the radio gear. As an example, hatches were found to be undesirable because they weakened the structure and leaked oil into the fuselage. Consequently, batteries and the receiver are now easily accessible by removing the wing. The Hillcrest battery box slides neatly into its compartment and the receiver is completely protected with foam rubber.

The torsion-bar landing gear is rugged but flexible and has created no problem mounted on the wing. The general structure is extremely robust, but with the light radio gear available, weight is not a problem.

Five different engines were tried in the Gimlet, but Bob Holland's Hornet or the Atwood proved to be the most suitable. Those builders who have not tried a kick-up elevator with single channel control are missing a very simple but terrific improvement. With this feature, loops and other maneuvers are much more easily accomplished.

The Babcock Mark II escapement makes the addition of up-elevator simple, and is an absolutely reliable light-weight low battery unit capable of handling large amounts of power, and could be used to actuate the elevator on even very large planes.

Begin construction by tracing the 1/16 sheet fuselage sides directly from the plans, using carbon paper for transfer, and mark the position of all uprights and doublers, etc. Next, trace the 1/16 sheet forward doubler, 1/8 sheet doubler and all bulkheads. Top and bottom of battery compartments are traced from the top view of fuselage.

Cement doublers, longerons and uprights in place on fuselage sides. When dry, pin and cement fuselage sides to formers 2, 3, 4 and top and bottom of battery compartment. Then join rear of fuselage with 3/8 thick tail block, and front with 1/8 plywood firewall..." 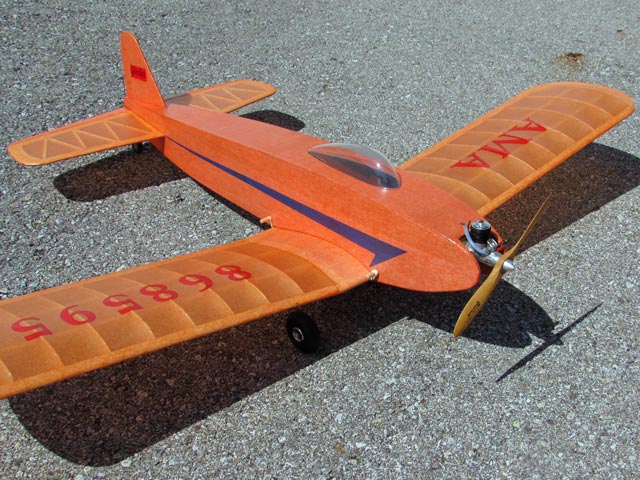 Hello, Herewith some pictures of my reproduction of the Gimlet, the first RC model designed by Phil Kraft [main pic, 007-009]. It features the correct Babcock escapement and a Holland Hornet engine given by my good friend Paul Thoms, just like the original and construction is as close as possible. A construction thread can be found here: https://www.rcgroups.com/forums/showthread.php?2246281-Phil-Kraft-GIMLET-1956-single-channel-low-winger-for-AMPLAN-Build-Off I flew it successfully three times and now it is in the collections of the AMA Museum in Muncie, Indiana. Best modelling regards,
JMP_blackfoot - 15/06/2022
Add a comment