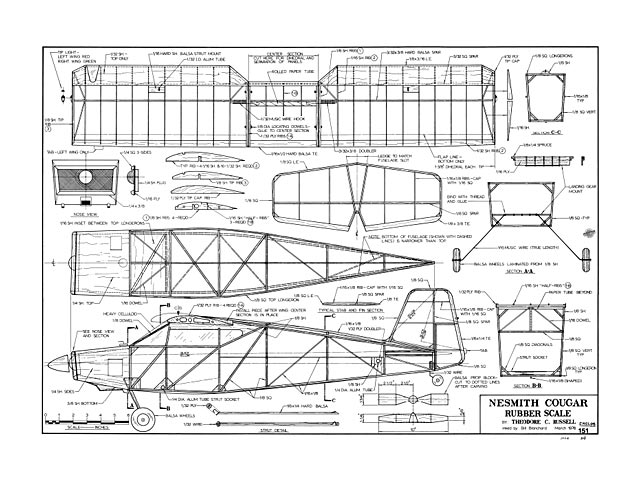 Quote: "For rubber-powered Scale, this design is large enough to use scale-position framework and yet fly like a bird. Nesmith Cougar, by Theodore C Russell.

The Cougar, a two-seat home-built craft, designed and constructed by Robert Nesmith, is made to order for Rubber Power Scale events. The full-size Cougar is simply constructed, and the model follows the scale framework for top Scale Fidelity points.

The ship possesses a fuselage length almost as long as its wingspan. This means a long, powerful, motor can be used for an extended prop run. The fuselage is nothing more than a box with four stringers. The wings and tail surfaces have the scale number of ribs and duplicate the full-size spacing.

The prototype has taken a first at the 1971 Cleveland Junior Air Races, a second at the 1972 Junior Air Races, and a seventh at the 1971 Erie (PA) Model Aircraft Assoc All Scale Meet. It should be pointed out that at the Erie meet, Flying Ace's rules were used. These rules give a 15-point bonus to low-wing ships, and deduct five points from a high-wing model. This 20-point handicap, together with no points for scale framework and rib spacing, was the cause of the low placing. At this contest the Cougar had three official flights of 35, 37, and 38 seconds in 15- to 20-mph winds. Normal flight times are about 45 seconds. The original weighs seven ounces, but could be built lighter.

A set of three-view drawings by James Triggs, and photos, including a color cover picture were in the February 1959 issue of American Aircraft Modeler. The model is 1/8 full-size, or 1-1/2 in to 1 ft scale. The model spans 30-5/8 in.

Construction: Construction begins by building two fuselage sides, then joining them with cross pieces. Note that the top of the fuselage is wider than the bottom. Short 1/8 balsa strips are used as gussets to maintain the correct cross section, and are installed as the sides are being joined. (See reference cross sections on plans).

The tail wheel wire strut is bent, bound, and cemented to a 1/8 sq strip. This is cemented to the tail post. The side and bottom stringers are added now, but the top stringer is not attached until the wing center section is mated to the cabin top.

Notch the stringers, where neccessary, to maintain the right height above the basic frame. Cement in the hard 1/8 sheet rear motor peg mounts. Face these on the inside..." 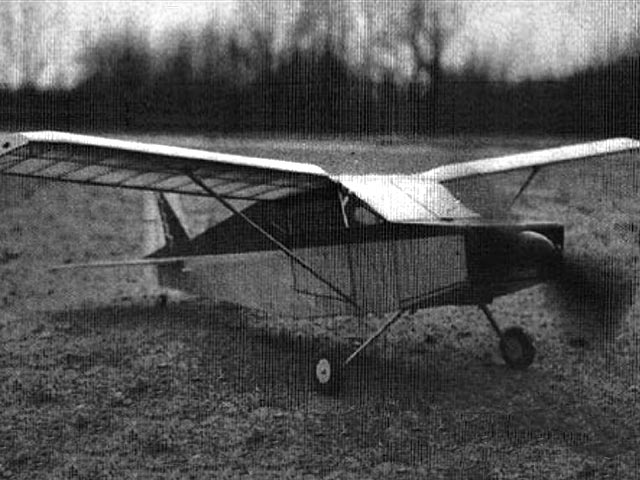 Light as a feather, very pretty hand-draughted plan. The lettering was labouriously written one by one with the help of stencils. The 'Nesmith Cougar' title looks like it is dry-rub letters, Letraset or Mecanorma. All as good as could be for the time. It can only be a fine flyer.
Miguel - 12/06/2022
Add a comment