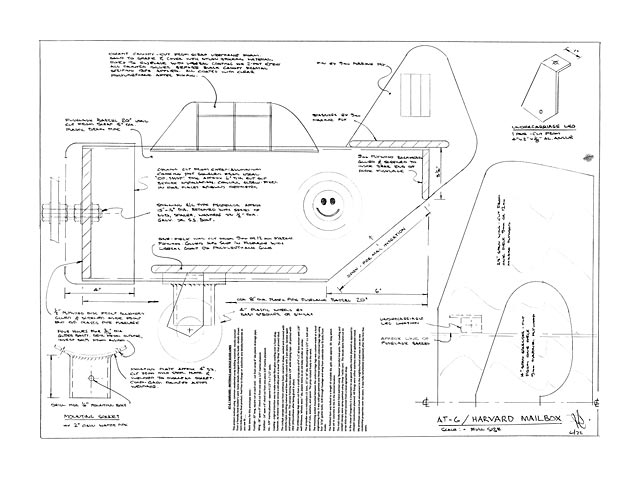 Note this is not a plan of a flying model. This is a mailbox.

Quote: "My wife and I built our (first)retirement home in Tauranga, New Zealand, back in 2003. On completion we needed a mailbox. I didn`t like any of the commercial offerings available and so decided I`d make my own. I was still very much into model aircraft - I guess that`s where the idea stemmed from.

I had a thing about Harvards then - still have. The RNZAF used them as their standard trainer for many years. Once redundant, many were sold off overseas, but a few were bought by private owners in New Zealand. One was bought by a local enthusiast and added to his small fleet hangared at Tauranga Airport. Robert also owned a Tigermoth, a DH Chipmunk and a couple more mundane GA aircraft - all in airworthy condition. I got to know him quite well and had rides in both the Tigermoth and Chipmunk around this time. His Harvard, picture here, retained the final official RNZAF colour scheme. I reckoned it is among the nicer colour schemes going, and the sight and sound of a dozen of them flying in formation is unforgettable.... I had built a couple of models of them around this time. One of them, also pictured here, started life as an unpainted CM Pro ARF and just had to be finished in this scheme also. I guess the move to the Harvard mailbox was a natural progression...

It served us well during our time in New Zealand and we eventually moved on about five years later. We built a new home over here in Australia and brought the mailbox with us. It got a full refurb at that time and then did another five year stint. After that we moved in to a retirement village. It became redundant then and was eventually passed on to a recycling facility and a new owner ....

This project was fabricated almost entirely from scrap materials sourced from a local builder's yard. He supplied the 8" dia. drainpipe for the fuselage and neatly cut it to size for me. The wings and tailplane were cut from scrap 9mm and 12mm marine plywood. It is important to use marine plywood here, regular interior or construction plywood won't last. Also, all metal fixings and fittings should be either galvanised metal or stainless steel for the same reason. Glue used was that messy polyurethane. It worked very well, but do cleanup immediately after use or you'll never get rid of it. The main paint finish was mostly brushed using the excellent small 'Resene' acrylic test-pots. The cowling was masked and painted with 'rattlecan' paint.

This prototype created much amusement during its lifetime. With a little imagination I can picture others along similar lines evolving - a Corsair maybe, or what about an F-86 Sabre?"

Basic specs for this prototype were:

The cockpit canopy was cut from urethane foam, carved to shape, sanded and covered with stretchy nylon stocking material and then liberally coated with 2-pot epoxy. Sanded again and painted silver. The canopy framing lines were 1/8" wide striping tape - all painted with clear polyurethane after being glued in place.

The undercarriage legs were cut from a small scrap piece of 4" x 2" ali box section with 1/8" wall thickness. Wheels were " dia. plastic items ex an old baby stroller or similar.

The propeller was a redundant r/c item, 15" or 16" dia. Mounted using a 1/2" s.s. bolt and series of nuts, washers, and spacer. The prop rotated freely in the wind.

The finished item was bolted to a length of suitable dia. gals. pipe approx 3ft long which was set in concrete in the in the desired location.

In the cause of longevity it is important to use good quality marine plywood as opposed to cheaper construction plywood. All fixings were either stainless steel or galvanised metal.

My prototype caused much amusement in the neighbourhood and was in use at two residential properties over ten years. It was fully refurbished (repainted) after the first five years." 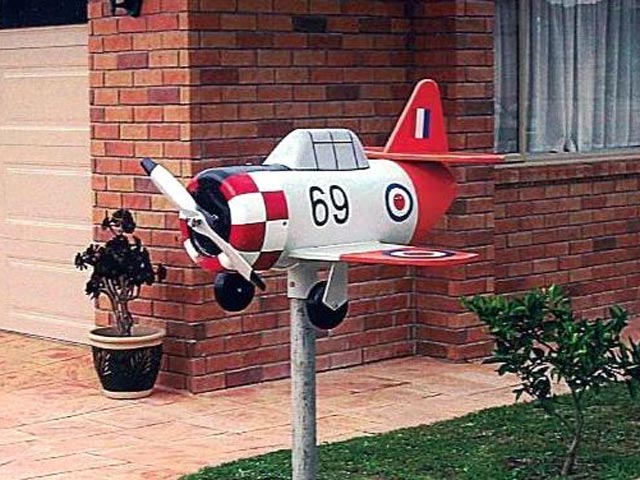 Thanks for "Posting" this one (pun intended!!). This is a beauty and the basic design would be adaptable to other round engined aircraft too......definitely on the build list!!
Mark Stanley - 13/06/2022
The postman leads a hazardous life. Getting bitten by the dog became socially accepted in time; now propellers biting their fingers too seems a little too much, really.
Miguel - 13/06/2022
Add a comment