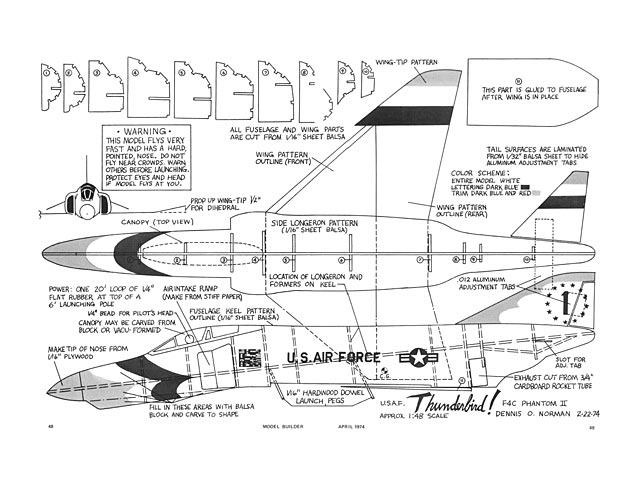 Quote: "Painted and decorated in the colors of the Air Force Aerobatic Demonstration Team, this model of the F4 Phantom glides through the air at speeds that make it look very much like the full size jets in action. Slingshot Thunderbird, by Dennis Norman.

Here's a project that will transition your young modeler from sheet balsa gliders into built-up construction and tissue covering yet it's still a glider, but with a different method of launching.

One of the most beautiful and inspiring sights in aviation today is the formation flying done by America's aerobatic teams. Both the US Navy's Blue Angels and the US Air Force's Thunderbirds have thrilled millions with the speed and precision of their flying. This project was designed to recreate the excitement of watching a Thunderbird streaking overhead in a low pass. Flight time is always in seconds, but the model's sturdy construction will give you hundreds of flights as rapidly as you wish.

Construction is pretty much elemen-tary, but special attention should be given to the tail surfaces which are made adjustable by the use of aluminum tabs. The wings and fuselage are built entirely from 1/16 sheet balsa. A simple profile fuselage may be constructed by laminating three sheet balsa profiles (this was done in our first test model and proved quite satisfactory). The built-up fuselage takes more time, but adds considerably to the model's appearance.

Having cut the four wing pieces, place the two large center sections over the wax paper covered plan and glue together, forming one large triangular unit. When this dries, remove the center section from the plan and sand an air foil by rounding the leading edge and tapering the trailing edge. In doing this, be especially careful with the trailing edge tips, since the wood grain will make them very brittle and easily broken. In similar fashion, sand an air foil shape into each of the wing tip pieces.

Construction of the wing is now completed and it should be set aside to dry thoroughly.

FUSELAGE: As mentioned earlier, the fuselage can be built in one of two ways. If you want to simplify things, cut the fuselage's profile from a sheet of 3/16 inch balsa. Having done so, simply round the edges and your fuselage is completed.

To make a more realistic looking model, you need to build up the fuselage. Do this by cutting the profile keel, side longerons, and formers, from 1/16 sheet balsa. For maximum strength, an 'egg crate' type of interlocking construction is used. The deep grooves in each piece are cut with a sharp, single-edged razor blade. The smaller notches on the formers are for stringers and may either be cut or sanded out. If you don't already have one, you can make a very useful tool for sanding stringer notches by gluing a 1/16 wide strip of medium weight sandpaper onto the edge of a small piece of 1/16 sheet balsa, making in effect, a very small emery board which will 'notch' neatly and rapidly.

Having cut and prepared all of the fuselage pieces, begin assembly by slipping the formers for each side onto the appropriate side longeron. Assuming that you have cut the deep grooves properly, you should be able to lay the finished assembly flat on your work table so the inside edges of the longeron and all of the formers are flat on the table. Having completed each side assembly, glue them one at a time to the profile keel.

Once this assembly is dry, you are ready to add the stringers in the usual way. The Phantom is a very curvaceous aircraft and you will find that the stringers bend and dip gracefully over the fuselage. The only area of difficulty will be the sharp curves found in the air intake space between Formers 3 and 4. Here stringers will not work. Instead, take pieces of scrap 1/16 sheet balsa, approximately 1/4 inch in width, and glue them between the notches in this area. When they're dry, you can then sand or carve these pieces to the appropriate curved shape.

The nose is made by gluing four balsa blocks into the spaces formed by the keel and side longerons. When these blocks are dry, they can be carved and sanded to the appropriate streamline shape. In doing this, make sure that you hold the fuselage only on the keel or on the side longeron pieces, since the 1/16 square stringers will break if they are gripped too hard. The pod beneath the nose is also built up From balsa blocks..." 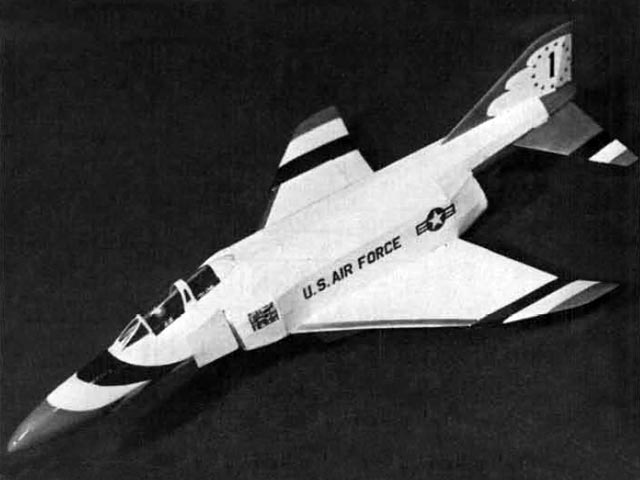 I like this plan very much, and I'm tempted to have a go myself at cutting out the formers quickly in foam just to see how well it all fits together. But it looks like it would be very fiddly and frustrating for a beginner. I am surprised the article calls this "a project that will transition your young modeler from sheet balsa gliders into built-up construction and tissue covering" as this seems like a big challenge for a beginner. Lots of compound curves to tissue-cover.
SteveWMD - 10/06/2022
Probably this is intended to be the intermediate step, for a children, before building the real one...
Pit - 12/06/2022
Add a comment