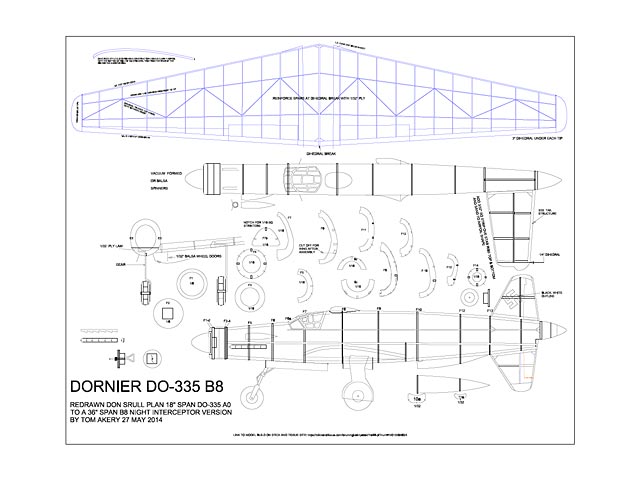 Quote: "Hi y'all, I'm submitting the Dornier Do-335 B8 plan and a few pictures of the model. Here's some background on the B8 and a link to the Cookup on StickandTissue.com: https://www.stickandtissue.com/forum/cgi-bin/yabb2/YaBB.pl?num=1401559480/4

The B-8, the final B-series variant, was to be a two seat night fighter for which the M23 was the designated development prototype. The B-6 night fighter was to be based on the A-6 airframe. The B-7 was also to be a night fighter with an enlarged laminar flow wing with 441 square feet of surface area and 2000 hp DB 603 engines for which the M22 would have been the development prototype. The B-8 was to have been a high altitude night fighter which incorporated the Heinkel designed high aspect ratio long span wings with 463 square feet of surface area and powered by the DB 603 LA engines of 2000 hp. It would have carried the standard armament of 1 x MK 103 and 2 x MG 151/20 cannon. There is no evidence that any of these night fighter variants were ever built.

My build is based on the Don Srull Dornier Do 335 (oz12465) plans which I've modified to the larger wing and second cockpit for the radar operator. This model was built but my eldest Grandson claimed it and took it home with him before she could spread her wings."

Update 11/6/2022: Replaced this plan with a revised version, thanks to Tom Akery. This fixes the scaling to the correct fullsize wingpsan at 36 in. Thanks also to Fred for spotting this. 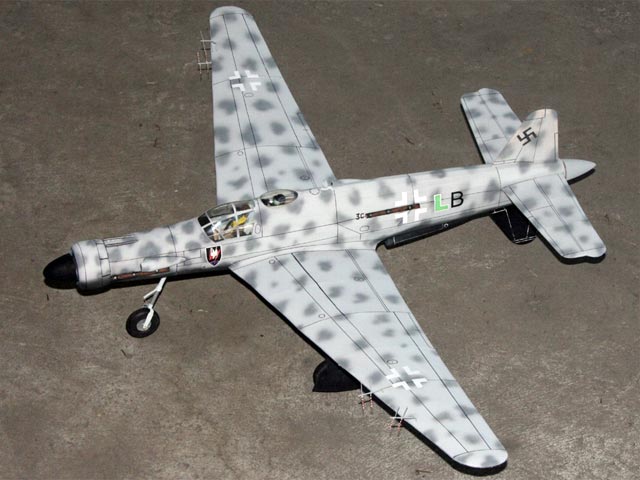 Time to write a new will :-)) A fine plan, fine covering work, and great, meticulous finish. Has the lovely child flown the Pfeil yet?
Miguel - 09/06/2022
Add a comment