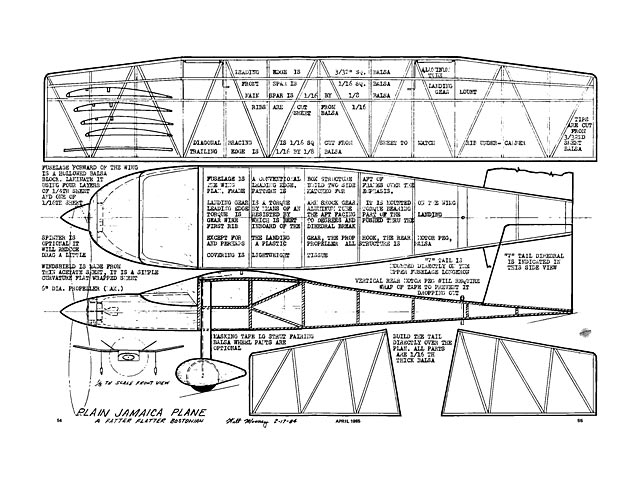 Quote: "The 'Peanut Perfesser' takes another side trip into the Bostonian ranks and comes out with a Fatter Flatter Western Style Bostonian. It's what happens when you stay in the garage too long!

This is a quite attractive Bostonian design that looks a bit different from the run of the mill designs. It was not made to look this way simply to be different. All the configuration characteristics that contribute to its appearance were designed into it in an effort to obtain increased performance, especially in terms of increased lift and decreased drag. Furthermore, a careful look at the model in the photos and at the plan will reveal subtle changes to improve your plans-built model over this prototype.

The external shape of the model was aimed at maximum efficiency while still having an easy-to-construct model. The balsa block nose was selected to provide as smooth an entry into the airstream as possible, while the rectangular fuselage cross section aft of the wing was selected to disturb the flow off the wing as little as possible, as well as for simple light aft fuselage construction. The required 1-1/2 by 2-1/2 by 3-inch fuselage box was oriented so the fuselage could be expected to provide more than a normal fuselage in terms of body lift. The V-tail was selected for less drag for a given level of stability. The landing gear legs were located outside of the propeller slipstream so they are being dragged through free stream air rather than the higher velocity and more turbulent propeller wake.

Two modifications were made on the plans relative to the model in the photographs. The original tail was made with a center section and was slid through the fuselage between the top and bottom longerons. The model flies with the tail up against the top longeron so the plan tail is made in two pieces to be cemented at the proper dihedral angle directly to the upper longerons. This allows the tail to be located about half an inch further aft for increased stability and makes a neater tail-to-fuselage joint for less interference drag. It also saves the weight of the tail center structure. The second modification suggested is the use of a propeller spinner.

The use of wheel pants and landing gear wire fairing is also recommended. They were used on the prototype. The rear motor peg on the prototype was horizontal. This made it relatively long and required 3/32 aluminum tubing, which made it heavy. A vertical rear motor peg is shown on the drawing. It can be 1/16 diameter aluminum tubing and significantly lighter in weight. It has one other advantage over the prototype system: the motor stays on the centerline of the fuselage for more consistent side thrust and adjustments.

The model has one inch of wing dihedral at each tip, measured to the bottom of the wing tip. It has two and a half inches of tail dihedral measured at the trailing edge. It should balance with its fuselage horizontal if supported by the wingtips at a point one eighth of an inch forward of the main spar. The prototype needed some left thrust to fly inside a basketball court-sized gymnasium.

The center section of the wing was maintained flat and each wingtip has about one eighth of an inch of washout to prevent tip stalling. A plastic propeller was used on the prototype, and the model has done about a minute consistently but is quite fast. A fairly high pitched propeller is also recommended.

Construction of this airplane is fairly conventional for a Bostonian West model. Most of the built-up structure is made up of either 1/16 square sticks, 1/16 by 1/8, or cut from 1/16 sheet balsa. The exceptions are noted or shown clearly on the plan. Don't omit the diagonal bracing in the tail pieces and in the wing structure, they contribute greatly to the stiffness of the structure.

The forward part of the fuselage is a carved and hollowed block. Four pieces of quarter-inch balsa and one of sixteenth are used. The thin layer and the two inner thicker layers are cut to match the outline shown in the top view, using the dotted inner lines as well as the solid outlines. The top and bottom pieces are cut to the complete outline and then hollowed as indicated by the dotted lines in the side view.

The bottom is left solid all the way back to the cross piece at the front of the fuselage framing, but the top can be cut away almost all the way forward to where the windshield attaches as shown. Cement all the block pieces together and make up a nose block in the conventional fashion and then carve the outside to a pleasing contour. The nose of the prototype was a near ellipsoid when completed.

The landing gear installation is a little different than the simple bent wire cemented into the fuselage usually seen, but is much more resistant to damage both to itself and to the structure to which it is attached. Each leg consists of a bent wire and an aluminum tube. The wire has three 90-degree bends at the top and is bent to accept your wheel or wheel pants at the bottom. Using the wing plan as a guide, make the first two bends to match the arm that is to be pushed through the rib inboard of the dihedral break. Then slip the aluminum tube (cut to the correct length) over the wire and bend the wire down to make the vertical part of the landing gear leg, Now the bottom part of the wire can be bent to match your wheel requirements. Make one left hand part and one right hand part, or you'll find yourself making three when you only needed two!

When making trim adjustments with this model, remember that both sides of the tail must be twisted in the same direction for pitch adjustments, and in different directions for turn adjustments if you are attempting only one kind of trim change. Twisting only one side of the tail will give both pitch and yaw inputs to the flight trim. Have fun with your Fatter Flatter Bostonian." 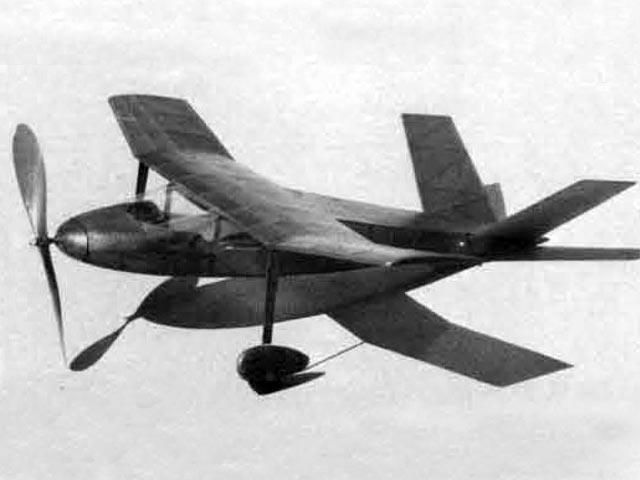 Initially, this design had more usual proportions but then the dog slept on top of it and so more or less squashed it a bit. Walt's mind was fixated on shaping a new balsa prop for his full-size Piper Vagabond, so he picked this up with no regard for any difference.
Miguel - 06/06/2022
Add a comment