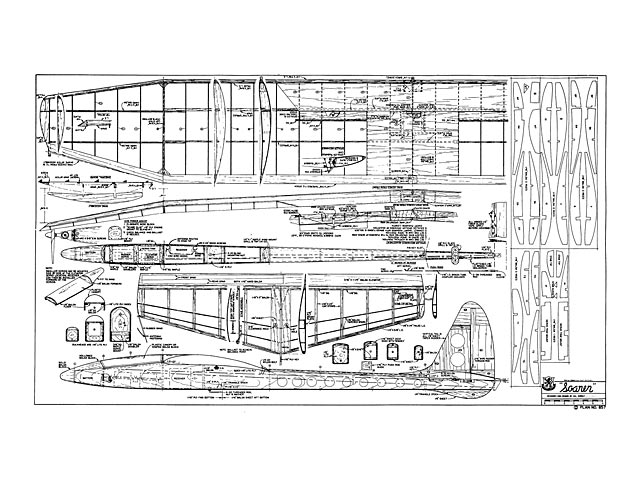 With the exploded interest in R/C soaring, there must be a 'zillion' glider designs available today. Many of them are highly developed and obviously excellent machines. The 2-Meter class seems most popular, especially outside of competitive circles. You probably have one or two in your stable. If so, you realize that this size restriction gives a real cause to search for superior aerodynamics. Comparative research would show that the 'boys' have boiled the aerodynamics down to a most successful formula; using this proven data, most 2-Meter gliders have become very similar.

With this story, still another 2-Meter glider is offered. The 'Soarer' is obviously a well-proven design, otherwise the effort to produce this article would be stupid. A more positive statement would be that its characteristics and performance have been admired by glider experts - it is a competitive machine.

The objective of this article is to offer you a different design. If your mood would be to try a different approach, the Soarer offers the opportunity with confidence. In short: if you have tried the rest, try this one next, you might learn something interesting.

For sure you should never charge into something just to be different. So that you will understand, the why's of the design should be explained.

Forty years ago the Sun rose in the morning and set at night. There was an atmosphere and the Sun shown. Many things have changed, but not the things which affect the flight of our models. Modelers were searching for long flights and found them just as hard to come by as they can be today. Maybe the problem was even more severe with those very weak engines and no hi-starts or winches. Perhaps with the shortcomings of those days, we modelers had to depend more upon nature's laws than we do now, with our fine mechanical assists. Perhaps aerodynamics were most important because we had little else to work with.

After watching the local glider group enjoy the sport for some time, an urge grew. First, to join the fun; second, to find out if some of the old concepts might work just as well in today's light lift conditions as they did back then. The Soarer is the result of that urge and is providing much enjoyment - let's check it out.

In those days little was known of model aerodynamics, but quite a few modelers were experimenting and investigating. Much like today's Free Flight Society, modelers were working together with people like Frank Zaic, accumulating the fundamental data. This author was in the midst of it and applied the learning to produce some very successful designs. It is those theories which formulate the "Soarer" design and which we will discuss.

Objective: To produce a non-powered aircraft which can be used to search out rising air and sustain flight as long as possible using it; especially under light lift conditions which are so common over most of our country and during the time available to us for flying.

(1) Low rate of sink for duration.
(2) Ability to perform in moderate winds.
(3) Penetration, ability to search for lift.
(4) Strength to successfully use launching methods and to provide longevity.
(5) Stability for ease of piloting and flight.
(6) Controlability: the ability to go where you wish, when you wish.
(7) Utility: simple to assemble and with space for common equipment.

These objectives and needs should be met to have an excellent glider, no matter what method might be used. The Soarer does it nicely in the following manner.

CONSTRUCTION. Wing: Any aircraft design should be developed around the wing; it is the heart of the craft. The heart of the wing is the airfoil. The airfoil chosen is Of the high lift variety. Fortunately, When properly used, this one also has comparatively low drag. This was developed from the 'Davis Formula' for model free flight used in about 1938. At that time its introduction was very, very exciting and it had to be quickly investigated. Comparative tests immediately indicated that if offered a 10% increase in dead air time over the popnlat 6409. Further experience with it offered even greater improvement. The Davis was and still is an excellent airfoil for duration use.

It is no secret that at our Reynolds numbers, airfoil efficiency increases drastically as chord width is increased. The average glider chord is right in the minimum range as far as serious efficiency loss is concerned in this respect. Area produces lift and duration. With a span limitation, area can only be increased with chord or multiple wings. With gliders, aspect ratio is widely used to increase wing efficiency. Increasing the chord reduces the efficiency. Increasing the chord increases the efficiency with the Reynolds effect. Obviously, a trade off is possible here. Increase the chord to get the needed area and let the two efficiency factors balance each other out. The Soarer thus uses a moderate aspect ratio of 8:1 which offers exceptional wing area for a 2-Meter glider. History would tell us that very successful free flights were used with aspect ratios of only 5:1, hence 8: 1 is no big deal... " 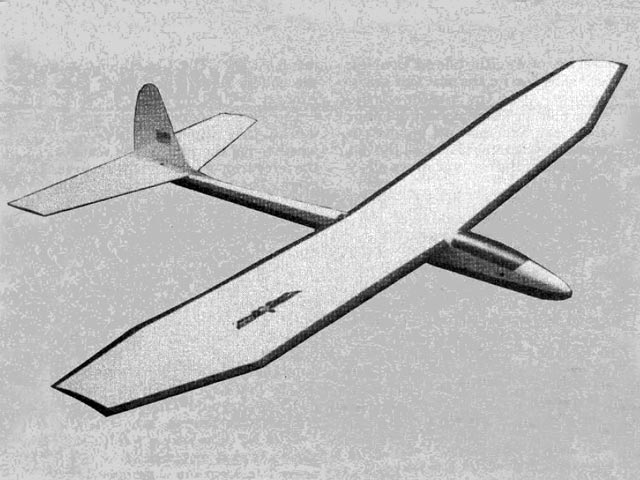