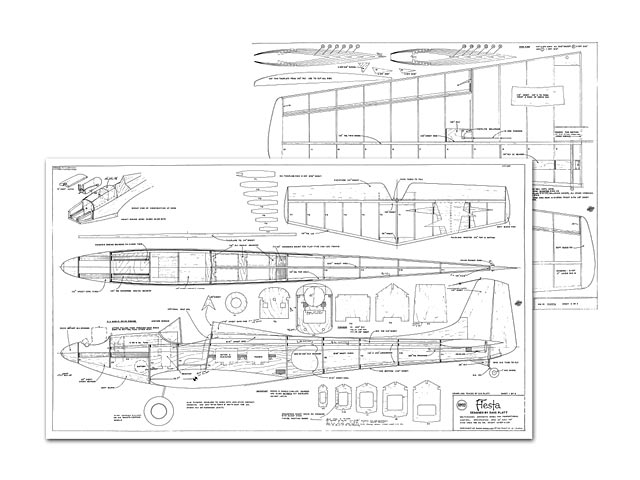 Quote: "Hi Steve, Thanks for your interest in the Fiesta project, been on the back burner for 50+ years. Here are my notes:

Fiesta 1967 by Dave Platt, updated by Brian Austin 2022. The Fiesta has long been on the back burner to build, but when it first came out, it looked quite complicated to build, with all the curves and the wing ribs construction. This led to me designing my own version in the early 70’s called Lorraine [see pic 009] - this was after the Cross of Lorraine, decoration on the wings - which was far more simple to build and smaller, being designed around a .40 cc power plant. Many of these were constructed in my club then, Anglia MFC.

Some time in early 2000’s I managed to get the full size plan of the Fiesta, when it was advertised for sale on E bay I think. I have to say that I have never seen a reproduction of the Fiesta, at anytime since the original was published, no doubt someone will prove me wrong.

Having studied the plan, which now included the wing plan that was not in the original 1967 Radio Modeller magazine, it still looked a lot of work. But now being retired with time to spare, plus a lot of stock balsa to use up, bit the bullet and started the build.

The wing section, Annenberg, which I had not heard of, is produced by using a template as shown on the plan. I opted for plotting a similar NACA 1412 airfoil to use, which I have included with these notes. I made a mistake when plotting the airfoil, as to the spar position, by using 33% of the chord for each rib. This does not match the plan, as the spar runs at a right angle to the centre line of the root chord, so you need to offer each rib up to the plan, to mark the spar position as shown on the plan.

Former F11, is too narrow, need 1/8” added to the width, to follow plan view of fuselage. Wing bolt holes, need moving inwards, to avoid clashing with the sides of the fuselage. I added 1/16” ply dihedral braces, either side of the spars, at centre of the wing joint, plus webbing between spars for 3 bays out either side of centre ribs (I used a centre rib on each panel to aid joining them together). Ply sub ribs were added, to the wing ribs, in front of the spar, where the undercarriage mounting blocks passed through them, with the fixed end of the 8 swg wire undercarriage, passing up to the tp sheeting, with hardwood blocks either side, to brace it.

The space behind the engine, that was for the fuel tank, was used for the 3 cell 5000mah battery The motor used is a Turnigy Sk3 Glider Drive 840 Kv. These are very good and reasonably priced at £35 as I write. Brian Austin"

Quote: "A new-look in multi. Fiesta, by Dave Platt.

It is generally agreed that, for top contest performance and reliability, it's wise for the competition modeller to stick to one design - either his own or someone else's - and develop this to a limit of perfection. Now, I wouldn't argue with this, but from experience of making too many of a kind, I will say that this approach can be boring. At the time the Fiesta was designed, I was suffering from over-exposure to Kingpins - and the urge to start something different was too strong for reasoning or logic to repress.

In any case, several new ideas had been going around in my mind, and the first Fiesta was built mainly in the spirit of experiment rather than any serious quest for higher performance. As it happens, a broken wire on the Deac put this model in Category 'E' after some 150 flights, but a new one was made, exactly as the first, because I felt that these ideas had indeed resulted in a superior product.

The first item the questioning mind had been pondering on was this necessity for a tricycle undercarriage, seemingly accepted 100 per cent, without real thought for any advantages that conventional undercarriages might have. It seemed to me that the two-wheel set up had to its credit (1) simplicity of installation, leading to more rapid building, (2) light weight - a steering nose unit with leg and wheel can check out at 7 oz! and (3) a corresponding reduction in u/c drag, this being a main source of drag with our clean, modern low-wing designs.

Additionally, I was well pleased to be rid of the sundry bothers that afflict steering nosewheel set ups, and find a steering tailwheel so much more reliable, yet equally effective! Rudder control proves ample for steering when the tail is up, largely because, of course, the track-stabilising influence of the nosewheel is no longer present.

All in all, it did seem that although trike is indisputably better with reeds, a good case could be made for 2-wheel gear when using proportional r/c equipment. A small side benefit, not realised until the model was flown, is the much cleaner appearance of the model in the air, particularly when inverted. Next time you fly your trike u/c model, notice the way that the nosewheel sticks out like a sore thumb and spoils the appearance in flight.

Wing section: Next sacred cow to receive a critical appraisal was the thick wing - again, a reed throwback with no obvious benefits to a propo model. On the contrary, in fact, a thinner wing does have certain advantages here. Less drag is always an asset, and this is noticeable on the vertical manoeuvres, like the 'Top Hat.' Also, since the model will stall more easily when required, the spin and stall-turn are more positive.

Less susceptible to gusts than usual, Fiesta's thin wing allows exceedingly smooth level upright or inverted flight - and five-foot inverted passes are no longer so hairy as they seemed before.

The particular wing section used on the Fiesta is Annenberg 12%, a laminar-flow section with a very low drag coefficient. One result is that the high overall performance is obtained from less power, the OS 50 being used in my own model to such good effect that fellow flyers are constantly surprised that only an 8 cc engine is being used.

Power and weight: To qualify this somewhat, it must be said that the OS 50 is an especially good engine; it probably measures up to most 10 cc sport r/c motors. Added to this, the model's flying weight, at 5 lb 9 oz hardly slows up proceedings! So we have a 6 oz tank, and this runs far longer than the current schedule demands about 15 minutes, in fact. More flights per gallon - how bad's that? Incidentally, I use an 11 x 6 wooden (Rev-Up) prop, feeling that this may improve the thrust somewhat.

Tail areas: The last major point of disagreement with common practice was the stabiliser and fin area. While messing about with Kingpins, I had made a number of small tails as an experiment; I needed to know how small one could go, on percentage, so that tails for scale models could be appraised. Matter of fact, I never did find out - I got to 14% and stability remained perfect! (Having since seen Jeremy Collins' Heath Baby Bullet flying so well, on 11% tail, I am more than ever convinced that no scale model needs tail enlargement.)

To get back to the point; it was noticed, on the Kingpins that general manoeuvrability seemed to improve with a smaller tail. In fact, a number of my customers got small-tailed Kingpins and all were satisfied with their results. Accordingly, Fiesta was designed with a 17% tail area at the outset, and stability and manoeuvrability seem to have found a successful compromise at this figure, though even now it still looks small.

The fin was made small also, to help in rolling manoeuvres, spins and, incidentally, the looks. At one time, before I had the Logictrol gear, I tried increasing the fin size, to correct a 'fish-tailing' tendency. It didn't help, and I'm now certain that this is an equipment characteristic, and is not aerodynamic. Mind you, I still don't know what causes the fish-tailing but I've seen loads of models doing it. Can anyone tell us the answer? Anyway, as I say, with Logictrol, the problem vanished, and fins went back to normal, and later on got smaller.

The model itself: Building this model will present no problems to anyone who could cut butter with a hot knife. If anything, it's easier than the Kingpin, because of the redesigned structure of the top decking, and the two-wheel u/c gear. One small point concerning the open cockpit. Exhaust oil gets in here, so make a 'floor' to protect the aileron servo, and fuel-proof the inside of the cockpit.

Lastly, don't do what your stupid writer did with his scale job - have the aerial go up to the fin, not left in a neat coil in the receiver bay! Out of sight, out of mind, they say. When surveying the bits, that second part just could be true!" 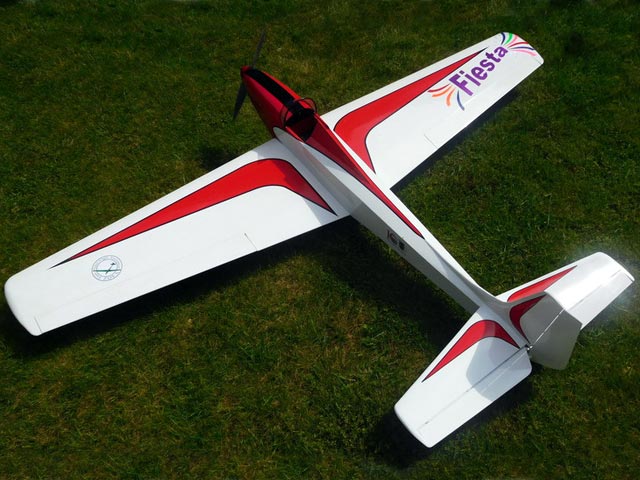