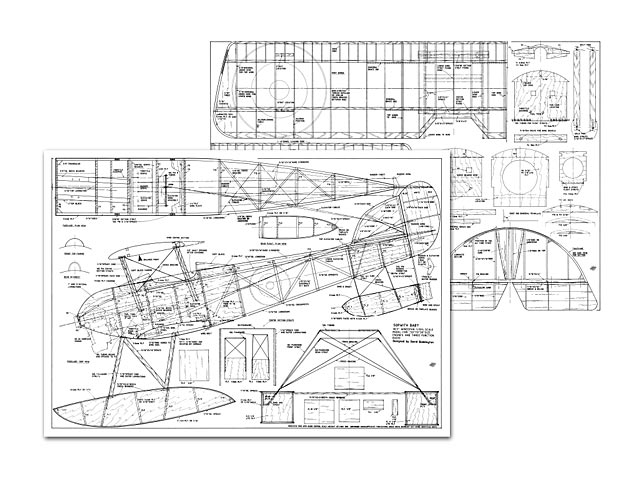 Quote: "I have to admit to being more than a little partial to the Sopwith designs. One of my all time favourites, both as a model and as a full-size aeroplane is the Sopwith Pup and I have modelled this prototype in many different sizes. Unfortunately, the Pup, unlike the Camel, was never fitted with floats and as waterplanes are another of my delights I had to find an alternative. It was but a short step, albeit a backward step in time to the Sopwith 'Baby'. Anyone familiar with Sopwith designs will immediately recognise the ancestry of the Baby, it is directly related to the 'Schneider'. winner of the 1914 prestigious seaplane race at Monaco and itself being virtually a 'Tabloid' on floats. However, the history of the 'Baby' is covered elsewhere in this issue.

The chisel-nosed version of the Baby was chosen simply because the shape makes an attractive change from the radial cowled version (subject of Brian Downham's 63 in wingspan version RM174). Choosing the Baby in preference to the Schneider was for more practical purposes, the former aeroplane has a larger fin and rudder area, the Tabloid and Schneider designs being somewhat marginal in this respect.

From the outset the Baby was designed to be operated from water, even though it is a relatively small model, and for that reason waterproofing should be considered throughout the construction and finishing. It can, of course, be operated from the land using a small scale-like beaching dolly and landing back on the floats. Over to Shaun Clay.

When I originally wrote these instructions it was with the intention of building the model myself. As usual, time looked like being the victor but then Shaun Clay offered (who said coerced!) to build the model. Readers may remember that Shaun also built the Heinkel He46 pull-out plan model featured in the April/May '92 issue of RCSA. I knew, therefore, that the model would be beautifully made and would have the best chance of success during the test flights.

Shaun has one or two ideas on construction of scale models and one of his pet ideas is being able to remove all struts from the fuselage and wings to allow for easy covering. Comments on these modifications, also obvious from the accompanying photographs, are included at the end of the main article. You have the choice of following the original drawings or making the modifications carried out by Shaun.

Before the Off: Study the drawings and read the construction notes until you fully understand all parts of construction, it is a conventional form of structure. The upper and lower wings are in one piece and do not rely on additional strength from the rigging wires, these can be elasticated dummies. Outlines are as accurate as the existing drawings available permit and wing chord, span and lengths, etc, are taken from established data. Wing section does not include undercamber, if this is to be incorporated I would suggest that plug-in wings and working rigging are also used. (See the 1/4 scale version).

Mark onto the drawings the precise location of the radio equipment, engine and fuel tank. Positions of prototype model installations are shown on the drawings and, as normal with WWI short nosed byplanes, keep the equipment as far forward as possible. Engine bearer widths should be adjusted to the particular engine used. or you can revise them to feature bearers and an engine plate.

Keep thinking about eventual waterproofing throughout the construction, ie no holes from outside to inside unless absolutely essential. Where you have control cables or rods exiting the fuselage the supporting tubing should give a minimum clearance and petroleum jelly applied to the exit point to minimise the risk of water ingress. Build in a narrow bore plastic tube for routing the aerial and to exit the rear fuselage adjacent to the rudder.

Make up your kit of parts, accuracy is important, and we are ready to start gluing - with a water resistant adhesive!

Fuselage: Construct two fuselage side frames from 3/16 sheet and 3/16 sq strip for the open structure at the rear. Note that the top front edge of the sheet is chamfered to follow the cross section, there are cut-outs for the centre section struts and the 1/8 sq diagonal members are set back from the surface (you could cross brace with strong thread for a real scale-effect).

Face the outside front area with microply (0.4mm plywood) if you have real difficulties in obtaining this material thin plastic sheet (plasticard) could be used as an alternative. Remember however that it would not be possible to use cellulose finishes with most of the plastic sheet materials.

Glue servo bearers and the wing fixing plate (predrilled) and crosspieces to the formers and then glue formers F3 to F9 in the marked positions on the fuselage sides. Check for squareness and leave to dry.

The top cowling is formed with laminations of 1 in block and a centre 3/16 piece. Glue them in place ready for final carving after the engine bearers and F2/F1 have been fitted, Fit the fuel tank at this time and the elevator horn assembly.

Make up the centre section struts (use a simple jig when soldering the cross bracing) and sand the struts to an oval section above the fuselage side location. Epoxy the centre section frame in position. followed by the .4mm plywood top decking. With the front of the fuselage now rigid the rear of the fuselage can now be brought together by gluing the crosspieces and rear formers into position. Check at all stages that both sides have an equal curvature. Add the top decking formers and stringers..." 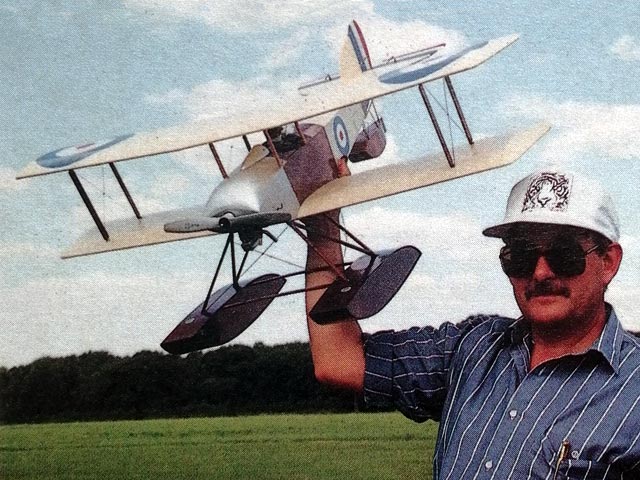