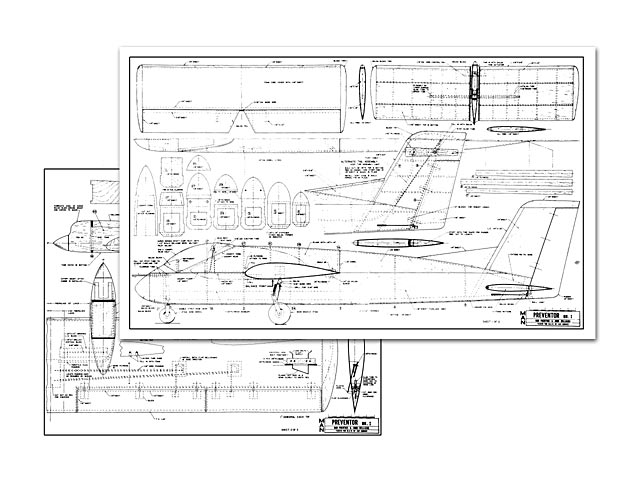 This project can be considered a truly across-the-border joint design and fabrication of two, almost identical model aircraft. The models started out as a redesign of the Ugly Stick (oz5175) into two two-engined trainers. However, as the design on the board progressed, it became uglier and uglier until it wound up in file 13. There is no way that the Ugly Stick can be camouflaged into something resembling a full-scale aircraft.

As a result, with a clean drawing board and after much discussion, the Preventors were conceived. The Mark I was designed as a trainer to gain experience in twin engine construction and flying. Completion of this trainer was accomplished in August '73, and it was so beautiful that it was decided that it would not be hazarded until after Toledo '74.

Assuming that anything beautiful would also fly, with no trepidation the Mark II was started with its radical changes, but still resembling the Mark I. The success at Toledo with the two models (Preventor won the Original Pattern Design Award) justified the hours of construction even if they hadn't been able to fly. They both fly.

The first flight was made at the Buffalo field on a rainy Saturday morning with one of the best pilots in the area at the controls, Ernie Nikodem. The Mark I took off beautifully and flew like a trainer. The whole flight was somewhat of a disappointment as it was actually dull. Nothing went wrong and it performed beautifully. What a relief! The Mark II did not fly that day as the rain continued and made the whole operation impossible. However, about a month later at the St. Catharines Field a much less experienced pilot took it off with no trouble and also had an uneventful flight.

Now if you are the type who likes big powerful models and have a full-grown car to carry them in and if you like to see the action stop at the field when you fly, try this project on for size. Like the new cars, you can establish your options and build your own Preventor. The flying tail is optional, as are the retracts. Decide on your own combination of details and start cutting balsa.

Only those details that an experienced modeler might have trouble with are included in this write-up. This is not a beginner's project.

CONSTRUCTION DETAILS: Fuselage. Use 48 in balsa or join two pieces together to get the required length. The balsa bulkheads have balsa strengtheners as shown on the plans. The doubler ends at bulkhead 1 and the fuselage side extends beyond this point. Keep the area ahead of bulkhead 1 open so that weight or batteries can be fitted to help in C.G. control. The hatch which includes the canopy cannot be built until the wing is attached to the fuselage. The fuselage separation joints can be made much neater by lining the joints with 1/64 ply.

If the flying tail is to be used, it must be completed and attached to the fuselage before the upper rear planking can be installed. The flying tail fin is much thicker than the conventional tail, and the fuselage at the rear must be adjusted to accommodate this change. The dorsal part of the fin is built after the top half of the fuselage has been planked. It is built right on the model. It is important to keep the weight down at the rear of the model as both the Mk I and II were tail heavy and required nose weight.

The canopy is made from the rear end of a WWII DeBolt canopy. A Super Heroes Wyatt Earp equipped with a 1-1/2 scale military helmet from William Bros makes an excellent pilot, and he is equipped with the right color shirt. Hold him in the ejection seat with a harness made of 1/4 in wide white tape. Color the inside of the cockpit in antique black.

Wing: The Mk I had a foam wing with fixed undercart (Sullivan). The models include flaps which are required for small field landings. Both wings are conventional in construction but note how the Robart hinges are lengthened with a piece of aluminum tubing to get the hinge point in its proper location. The cutouts for the bellcranks are readily accomplished if the tool indicated on the plan is used.

The best source of power for foam cutting is a 5 amp Variac or variable transformer. Accurate control of the voltage is assured and clean cuts can easily be made in the foam. Use 1/16 welding rod for the flap and aileron push rods. (Visit your local welding shop and buy a lifetime supply for about $8.00.) Insure that support guides are installed in the grooves to prevent whipping of the rods.

The wing can also include retracts as did the Mk II version. To gain strength in the center section area of the wing, the wheels retract outward. A little bit of ingenuity will make it possible to use the Sullivan units with your retracts. Use a strong unit as the model will weigh about 10 to 11 lbs. A wheel well cover can be attached to the moving part of the Sullivan unit to cover the wheel opening when the wheels are retracted. Being attached to the moving part of the unit will insure there is no problem when the unit flexes. Details of the installation cannot be provided as each retract unit has its own system. A possible. installation is shown on the plans.

Planning the installation of the throttle controls must be done before the wing is covered and before the nacelles are installed. Determine the direction of movement of the throttle servo so that the flex cable leads can be properly located..." 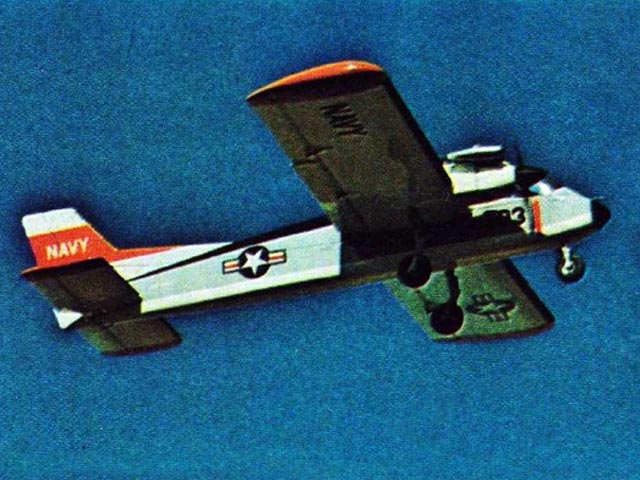