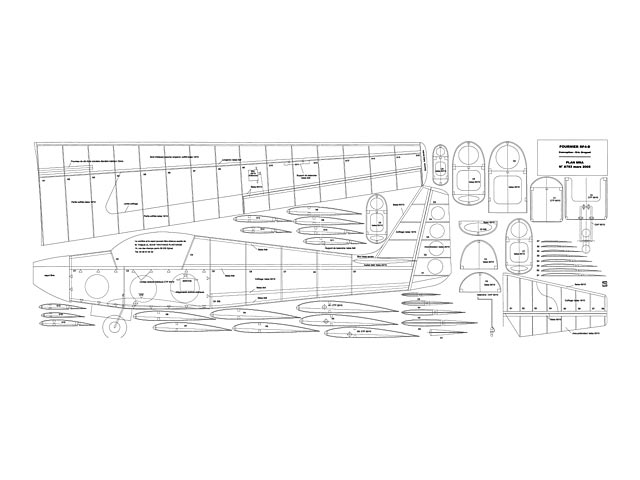 Note this planfile is derived from the raw scan posted on the AF site by (see datafile). This version here has been cleaned up, aligned and stitched together as a single sheet.

Quote (google-translated from the French): "A bit of history: The RF-1 and RF-2 were never consructed in series. The RF-3 was built in 90 copies by the company ALPAVIA 3rd Gap. Its first flight took place in March 1963 and production ceased in 1966. The RF-4 is in fact a modified RF-3, and reinforced to be able to perform aerobatics. The prototype made its first flight in November 1965.

The structure of the Fournier was designed in a very classic way: wood and canvas, some fiberglass elements such as the engine cover, fuselage fin fitting and the Karmans. The engine is provided by a Rectimo 4 AR of 39 hp. It's about actually from a modified Volkswagen engine. It is equipped with an outboard-type starter installed in the cockpit allowing start-up on the ground and in flight. The glider plane, as conceived by René Fournier, is a single-seat sports device, of great finesse, designed to be used either as a classic plane or as a motor stopped like a glider.

The RF4 weighs 275 kilos empty and cruises at 180 km/hour with a range of 650 km. His fine piloting and classic, its maneuverability and robustness allow it to be used in aerobatics with or without an engine. In glider use, the propeller is wedged in a horizontal position, to hide the air intakes of the engine, making it possible to increase the glide ratio of the machine and to 'keep warm' the mechanics for an easier start in flight.

Some RF-4 will be manufactured by Alpavia, then it is the German company Sportavia which recovers the production license. The Fournier was then baptized RF4-D (D for Deutschland). The production will however be relatively brief; when it stops, in 1970, 173 RF4-D will have been built in total.

Among the notable facts to put in the prize list of the RF4-D, we can note the crossing of the Atlantic in 175 hours and 42 minutes, carried out in 1969 by the American, MJ Slovak.

Construction: To start assembling the fuselage, you must first join together the back and the front of your plan. For this, two solutions are available to you: the first is to buy a second issue of your favorite magazine in order to use the second plan that you will connect to the first..." 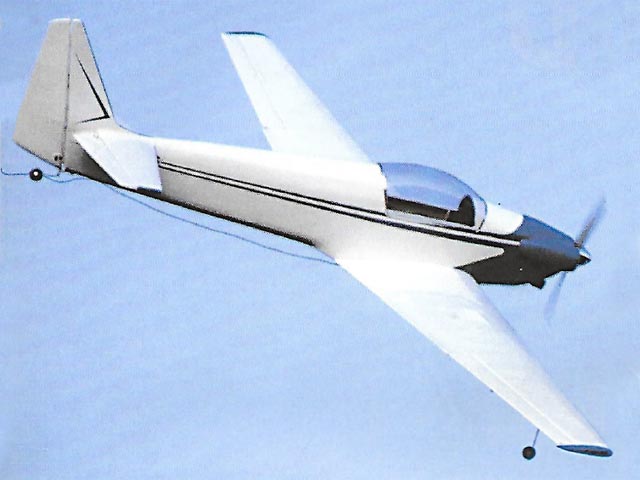