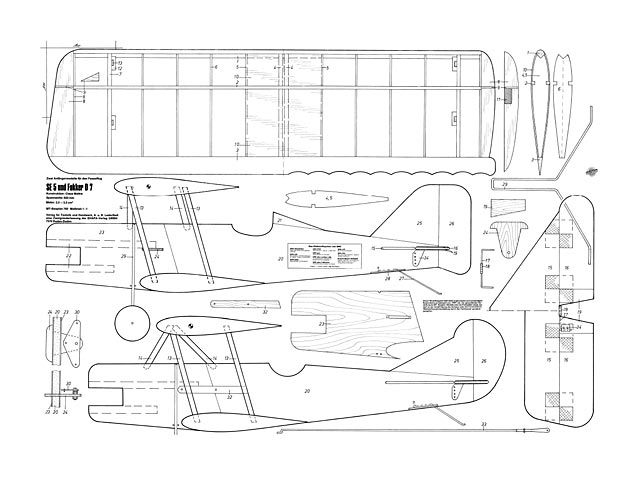 Quote (google-translated from the German): "Two vintage cars: SE 5 and Fokker D 7 on the tether line. Construction by Claus Maikis.

In this issue of the FMT we are publishing two simple control-plane models by the well-known control-plane specialist Claus Maikis. Controlled flying has become a stepchild of model flying as a result of the spread of RC systems. It is a nice discipline, on the one hand ideal as an introduction to model flying for beginners and less well-off youth, on the other hand in the aerobatic, combat and speed categories a fully-fledged model flight division that has the same great ability as RC model flight demands. The two beautiful and well-flying models are primarily intended for beginners. Perhaps there are also 'old hands' who, for a change, will turn the rubbish bin into a tethered aircraft.

When you race from competition to competition like this, there is sometimes a lack of fun in the fight for placement. When the season is over, people like to pick up the Gaudi plane again to do a few relaxing laps, fly a few indefinable figures and hear what the old engine still has to say. An airplane for this purpose should be something like a rocking chair: a bit nostalgic, very comfortable and pleasing to the eye. Both of our constructions are not only intended for stressed-out competition stars, but also - or rather, for young pilots who are not quite so sure about the controls.

The construction is so simple that even an inexperienced person can complete the model in a week. The two aircraft types differ in the silhouette of the fuselages and the wing tip arcs. Otherwise, as far as possible, the same parts were provided for both versions. This makes construction easier if you want to build both models, or if, as in our club, two pilot comrades can each build one type and use the same templates (pattern ribs, side parts).

In order to ensure that the building instructions are sufficiently detailed but not too extensive, they are written in telegram style: First, two plywood ribs are made according to pattern 6 and then the balsa ribs for the wings are made using the block process. The wings are assembled with the trailing edge 3 lying flat; the leading edge 1 must be underlaid several times to prevent warping.

Attention: The FOKKER has different edge curves for the lower and upper surface. Center lines should be marked on the ribs. When constructing the tailplane, make sure that the holes for the connecting bracket are drilled parallel in both rudders. The support 19 is necessary for reinforcement. In addition, the rudder horn is to be screwed on over the bracket later. Bushing 18 ensures clean storage of the bracket.

Glue the fuselage to the engine mount and side panels 23 (white glue or 2-component adhesive), saw out the cut-out for the segment mount. Saw out the surface section a little narrower in order to to be able to adjust precisely. Firmly install the lower surface, reinforce with some glass fiber around the leading edge. Now attach the wing struts. 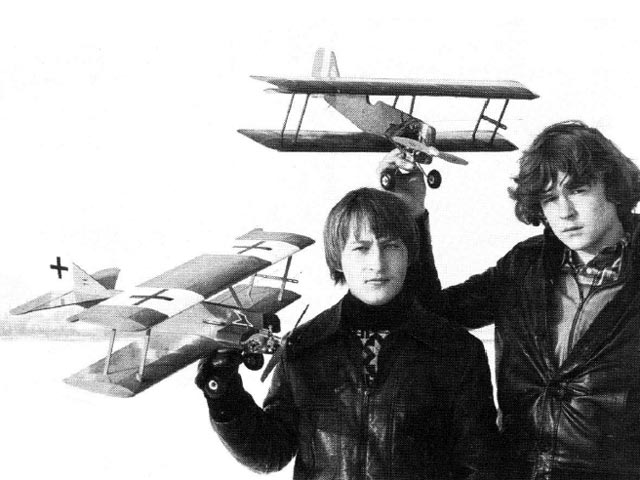