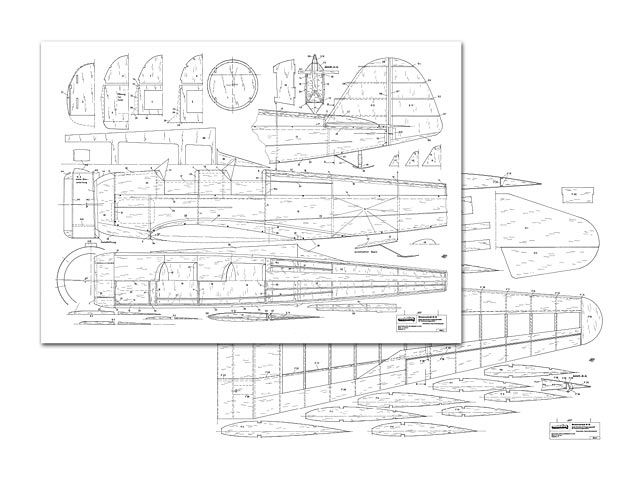 Quote (google-translated from the German): "Now another blueprint from our designer Rupert Schmalzgruber! Build an unusual semi-scale model! The Messerschmitt M 35.

Actually, the correct name for this type of aircraft is BFW M-35, because the M-35 was still made in the Bavarian aircraft factory in Augsburg, which later became part of the Messerschmitt works. The M-35 was intended as a trainer and sports aircraft and was first presented to the general public at the 1934 Geneva Aerosalon. It had already taken off on its maiden flight in mid-1933. Various pilots took the opportunity to fly the M-35 and were very enthusiastic about the flight characteristics.

It was not for nothing that Willi Stör was able to rush from success to success at aerobatic demonstrations. In 1935 and 1936 he even won the coveted title of German Aerobatic Champion. Willi Stör's machine was a series machine with minor modifications. The most obvious changes were the sleek NACA hood and front seat cover. The engine first had to be able to deliver the required power in inverted flight. That was a mechanic's specialty back then.

A total of only 15 machines of this type were built. The M-35 had a cantilever wooden wing, planked with plywood at the front and only covered with aircraft lines behind the auxiliary spar. The wings, attached to the fuselage with three fittings, could be folded in on these. The fuselage consisted of a tubular steel framework with fabric covering; The elevator and rudder were made entirely of wood. The fins are planked with plywood, the oars are fabric-covered.

The model: It is reproduced on a scale of 1:5, which results in an impressive wingspan of 2310 mm. The use of a 22 ccm Tartan engine, which can still handle a bar of 450 mm, has made such a size possible, as the bonnet has a diameter of 200 mm. This 'wind trap' has to be endured first of all in order to be able to achieve prototypical flight performance. With a total weight of 4.3 kg, this is still a good thing. You should aim for a weight of less than 4 kg, which is easily possible with the right equipment. With a 400cc tank, flight times of 20 minutes are achievable, which should be sufficient in most cases.

The construction of the model makes no special demands, neither on the builder himself nor on the existing construction facilities. Only a little more space is needed to build the model when measuring and when the wing has to be inverted. However, everyone should still check for themselves whether they can already land properly, because model pilots who can only perform three-point landings (bonnet and chassis) should keep their hands off it for the time being, because the wooden slats are not exactly cheap.

If you have a level building board, then the prerequisites for a good replica are already in place. The fuselage is box-shaped, so it's simple to build, only the transitions between surfaces made of light solid balsa require some fitting work and the nose of the fuselage requires a good sense of proportion and sanding work.

The horizontal stabilizer of sheet is quickly made, only the vertical stabilizer needs a little more time. For very fast hobbyists with little time, a sheet rudder can also be recommended.

The wing is made up of 3 parts, the joints can be reinforced with glass fabric tape. If the weight of the model is not too heavy (approx. 4.5 kg), then the 5 mm chassis struts are completely sufficient.

Due to the large cowling diameter, a strongly sloping engine naturally catches the eye. Therefore, something was cheated and the tailplane was set at 1°+. The pitch of the wing by 1.5°+ results in a setting angle difference of 0.5°..." 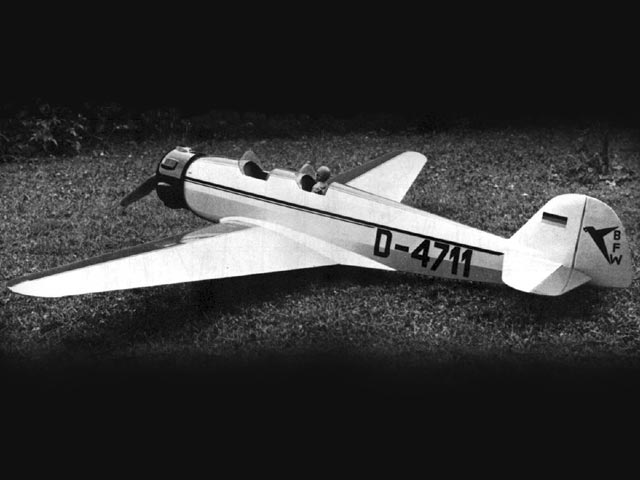