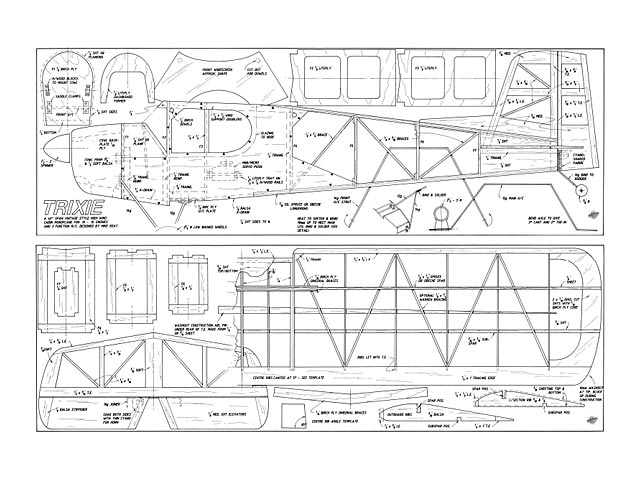 Quote: "It was a wonderful model, one of those which was completely reliable, was enjoyable to fly, and in which you had total faith. It clocked up over 2500 flights, around 500 hours - then it happened. At last year's Vintage Weekend at Old Warden a certain editor captioned a photo of it in RCM&E with reference to woodworm - and this after 10 years or more at OW - a veritable kiss of death! One flight too many, a cross wind, a touch of pilot complacency and my much loved Black Magic gave up the fight.

My wife Bobbie said build another, but however well another was built, it could never replace the 'family pet' with its used and oil soaked look. So out with the traditional back of the envelope and with pencil sharpened and licked, Trixie was created.

My Tele-Porter had proved to be a stable flyer and had many characteristics I liked, so a mini version was planned - 3 channel, 40 in wing span, easy to construct and cheap to build with a .10 size engine up front. It was built and test flown before the Nexus 1999 New Model Design extravaganza at Old Warden where it received third place, so some people must have liked it!

The model, as can be seen from the photos, turned out to be quite pretty and sits tidily in the sky as it potters around on idle throttle. It's capable of modest, positive aerobatics with the rates out and will loop, roll, Cuban 8 and stall turn with the best of 'em. It's too early in its evaluation to have tried much more but its responsiveness shows promise.

Construction is very straightforward and should give little cause for concern to even the newcomer to plan building - so here goes.

FUSELAGE: Start by making up the fuselage sides from medium grade 1/8 sheet balsa, joining at the datum; when dry, add the top and bottom 3/16 x 3/16 obechi, spruce or hard balsa longerons. Mark the positions of the seven formers on the insides (check that they ARE the insides!) of each assembly, and drill holes through both sides for the wing retaining dowels.

Make up the formers F1 - F7 from materials shown on the plan. White glue F2, 3 and 4 to one fuselage side reinforcing the join with 1/4 x 1/4 triangular section. When dry, glue on the second side, preferably using a jig, making sure all is square. Next add the remaining formers, the wing retaining dowels and the 1/8 x 1/2 top spine slotted at its rear end to accept the bottom of the fin, its strake and the wing seat doublers.

Leave overnight for all the joints to set then turn the fuselage over and add 1/8 x 3/16 Warren bracing between F4 and F7 on both sides and 1/8 x 1/8 to the bottom between the formers. Make up and fit the 1/8 sheet infills above and below the stabiliser leaving a 3/16 slot for later fitting. Note that the stern post is part of the fin construction and will be fitted later..." 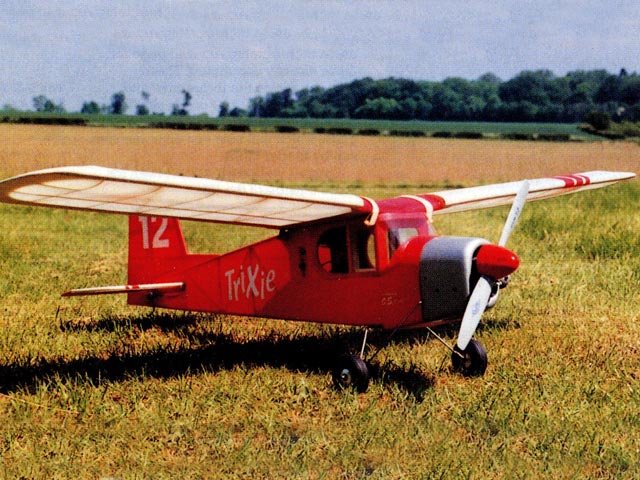 Is this cuteness on wings or what?
Miguel - 14/05/2022
Indeed very cute !! :) Just check the scale on the plans e.g. the longitudinal length of the stabiliser on the fuselage side view differs from that on the stabiliser plan.
KvdB - 24/05/2022
Add a comment