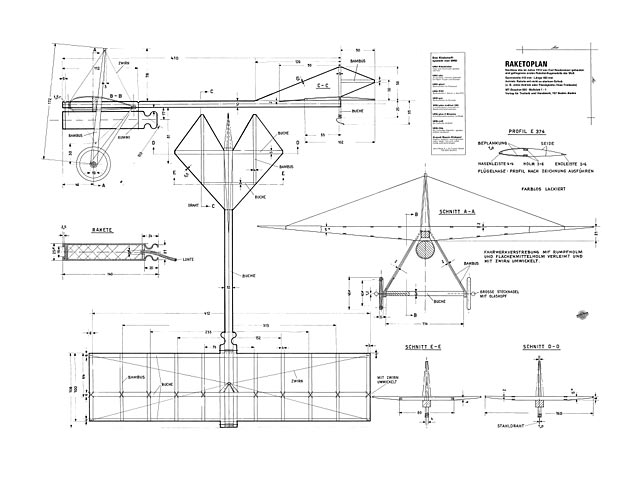 Quote (google-translated from the German): "Raketoplan, by Stefan Erbacher. How a 1912 flight model became a historic museum stick.

As far as I know, this rare piece - a rocket flight model from 1912 - can only be found twice: in the aviation department of the German Museum in Munich and in the World Aviation Museum in Berlin, also known as the Lilienthal Museum.

As a boy your age, I built model airplanes with my friends with more or less success. At that time, the only drive we had at our disposal was the so-called rubber motor, which we used to drive the rod and hull models.

The competitions at that time used the straight distance covered as a benchmark. The mounted, twisted elastic bands have proven to be very disadvantageous. This was due to two unavoidable factors:

1. The initial propeller speed at takeoff was much greater than at the end of the flight;

2. The rod or the hull was slightly warped by the rubber twist. In order to achieve a straight ground launch, with the two wheels lifting reasonably simultaneously, the wing had to be twisted to counteract the propeller. Likewise, the second disturbance at the end of the fuselage had to be compensated for by a control deflection, which meant that when the rubber tension decreased, the control deflections became noticeable as turning flight. Here it happened that the model returned in the direction of the take-off site while gliding.

If at that time the performance of the models had been evaluated according to how long they stayed in the air, I would never have thought of forcing a straight flight with a propellant drive. As a result, I first had a rocket made that would take over the thrust without a bang or an asterisk - on the assumption that a rocket gives off thrust as long as you can see it rising with the spraying tail. That was a fallacy. What came out at the back no longer had any thrust. It was just burnt powder. As a result, my model only jumped like a frog on the first try. To my scorn, I heard from my friends: If you hadn't tied the rocket to the plane, at least it would have flown.

With my modest pocket money, which really couldn't be compared with the means of a space agency, I negotiated with a fireworker, to whom I explained my wishes for longer burn times and greater thrust. When I needed propellants, his interest was not particularly great. Nevertheless, he supported me in such a way that I got good results.

I now tested the propellant charges in their thrust on my train, where I fastened a propellant charge to the freight car, a cord at the end of the car that led from the table to the floor via a pulley. I tied an elastic in the senkredite part to read the thrust from the tension and recorded the time with the stopwatch.

Unfortunately, the results were very different, so that I was not certain that I would achieve a specific thrust time with any take-off later. But when I was satisfied with my experiences, I found out in November 1912 about the competition of the Frankfurter Flugtechnische Verein, which was to take place in December.

When I registered in the office of Mr Oskar Ursinus, he asked me which drive my model starts with. When I said to him: 'With a propellant in the form of a rocket', he explained to me: 'Of course this can only be allowed out of competition'. He added: 'You can't fly without a propeller!' I often thought of these words from Oskar Ursinus when he was given the name Rhönvater about 10 years later and proved to the whole world that you could fly without a propeller..." 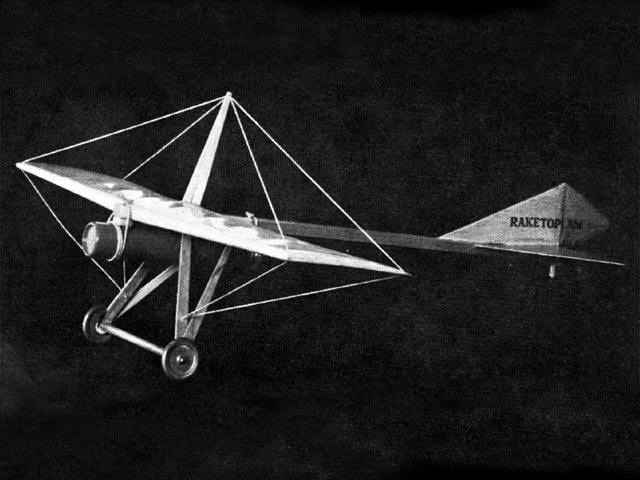