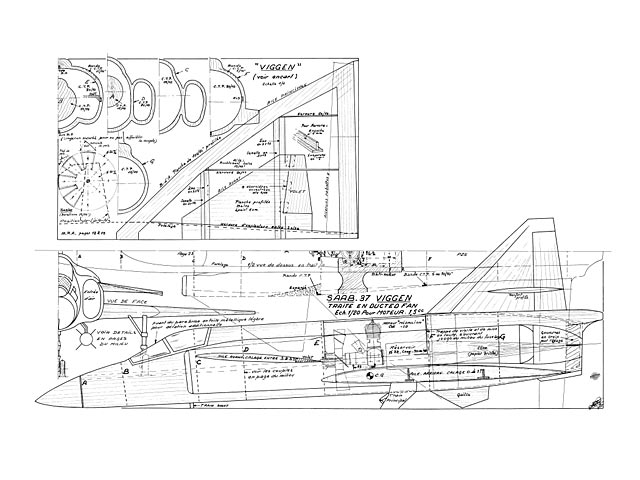 Quote (google-translated from the French): "The SAAB 37 VIGGEN flying model at 1/20 scale for Ducted Fan, by Maurice Bayet.

It is not a recent device, because aeronautics is no longer what it was and the design, production and testing of a prototype now require the cooperation of several countries (witnesses Transal, Jaguar, Alphajet, Airbus, Concorde, etc), but we were interested by the Viggen which succeeded the Draken. It is both a delta and a canard, therefore of an unorthodox layout.

We immediately thought of a flying model. However, its realization only seems interesting as a 'Ducted Fan' model because for us, in a flying model of a jet plane, it is out of the question to have a visible propeller or motor.

For the Viggen, we first built an all-sheet model at 1/40 scale (ie 1/2 size of the model here) which, launched by hand and with a slingshot, enabled us to situate the CG and experience the effect of the front plane flaps.

On the model, which only did 'free flight', the rear flaps were only used for adjustment (they are indicated on your drawings for purely documentary purposes). They would be interesting in an R/C version with several functions, but it would be necessary to enlarge the device to 1/10 scale (so double) and mount a 2.5 cc engine.

CONSTRUCTION: We have been limited to a scale of 1/20 due to paper format available, to give our readers a full-size plan.

Fuselage: This is built on the principle of the monocoque, but rather than adopting the classic formula of 2 half-fuselages cut in the vertical plane, it is possible to cut in the horizontal plane. This is more practical, if only for the opening on the upper half of the fuselage between the frames E and F to allow easy access to the 'turbine' (with the starting pulley) the engine and fuel tank.

There are 7 main formers (A to G) because the air outlet at the rear end of the fuselage is a circumference which will be a strip of ctp of 5/10 wide of 4 mm. We have 2 side rails in 6 x 3 bd which will be housed in notches in the different couples. We have indicated on the drawing the size of the formers (pages 12 and 13) the materials and the sections, always the ctp apart from couples A, E and F can be replaced by balsa by doubling the thickness provided in ctp. The covering will be in balsa slats of 15/10th. To increase the air intake in addition to the normal side openings, the front part of the windshield will be replaced by a light metal mesh (small, fairly fine mesh).

After testing, and depending on the power of the engine used and its weight, the engine can be moved, as shown in the 29 mm insert on the front (measure from the vertical axis as indicated).

This engine will preferably be a Cox 09 Medallion whose weight is only 85 g and whose speed varies from 3,500 to 20,000 revolutions, which is very advantageous for a turbine..."