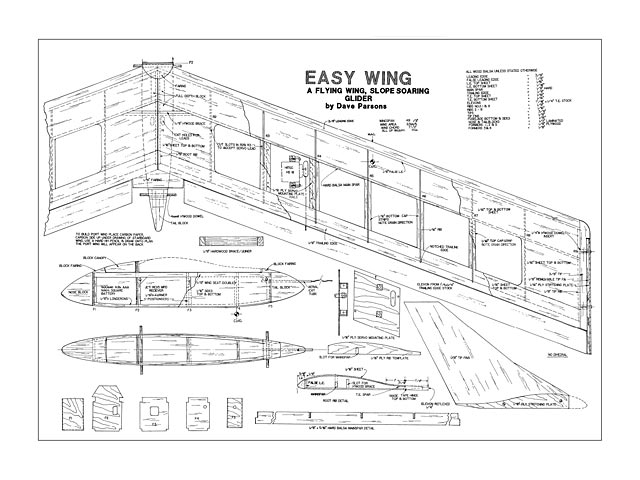 Quote: "Get out there and enjoy the views with this simple-to-build 49.5 inch span two-channel soarer. Easy Wing, by Dave Parsons.

One of the things I like about slope soaring is the view. I know that the flying of some sort of glider is involved, be it a big heavy scale type, a light-weight for those calm light wind days, or a fast aerobatic job. They all have one thing in common; you have to chuck them off a slope or the top of a cliff, most usually not very accessible by car. I know of one or two that are, but they are secret!

Getting to the flying site is itself normally a challenge, but once achieved, the first reward is - the view. Something that flat field flyers must envy. I visited one of my local soaring sites recently, a west facing ridge looking out over the sea. A short ten minute walk brought me to the top and was rewarded by the view; a fresh-to-strong westerly breeze produced good smooth continuous lift, so good that one hang glider pilot I spoke to described it as 'boring'. When asked what he preferred, he replied that he liked inland sites which produced more interesting and rewarding thermal lift, but the thing he missed was -the view.

Allowing for modern technology, I don't think it is a real model aeroplane unless it has rubber bands holding the wings on! I see that the Royal Mail has changed its rubber bands. I think the new red ones are quite fetching and perhaps they may last a bit longer. The 'Easy Wing' employs rubber bands to attach the wing to the fuselage; only two are used for temporary retention, but are replaced by four fresh ones for flying.

Wing construction is very easy, the cord is constant and the ribs are identical of 1/16 thickness, except for the root and tip which are 1/8. The hard balsa main spar is set vertically and is notched for the ribs and the ribs for the main spar, egg box construction. The only tricky bit is that the slots are angled to accommodate the 30 degrees wing sweepback. To avoid distortion, don't make them too tight a fit.

The wing is built flat on the plan on the building board, (don't forget the clear film over the plan, which only shows the starboard wing). The port wing drawing can be produced by placing carbon paper under the plan, carbon side up. Draw onto the plan with a hard HH pencil and hey presto, the port wing appears on the back. Start by pinning and gluing down the bottom sheet (leading edge (LE), trailing edge (TE), root, tip and cap strips), followed by the false LE and the notched TE, next the vertical main spar, and then the ribs, finally the tops sheet (LE, TE, etc). The leading edge is attached, carved and sanded to profile once each half is removed from the building board, also the 3/8 ins tip block. Don't fit the root top sheeting until after the wing halves have been joined and the root joiner/brace is installed, there is no dihedral.

Drill the tip to accept the hardwood dowels for the tip fin attachment screws. Don't forget to cut access holes in the bottom sheet at the root and in ribs 2 and 3 to accept the servo lead, also install a short length of fine cord through these ribs to pull through the servo lead. A small piece of masking tape inside holds the cord over the hole in the bottom sheet to be extracted by a pair of tweezers after the wing has been covered. I used Fibre Film; it does add some torsional stiffness.

The elevons are top hinged with Magic Tape after covering, two layers, one on the top and one underneath. The servos are mounted on 1/16 ins, ply, plates which are in turn screwed to 1/8 ply bearers at ribs R3 and R4. A ball link connector is used on the push rod at the elevon end to accommodate the 30 degree sweep-back and a Z-bend at the servo end.

Fuselage construction is easy, it is only 14 ins long and there is not a lot to it. The bottom and sides are 1/16, a couple of blocks carved to shape at the nose and back end plus a few formers, three are ply and two are balsa. You could leave out the rubber bands and the dowels and make the wing attachment by a dowel in the wing leading edge into a hole in F2 and a nylon bolt into an anchor nut at the rear, your choice..." 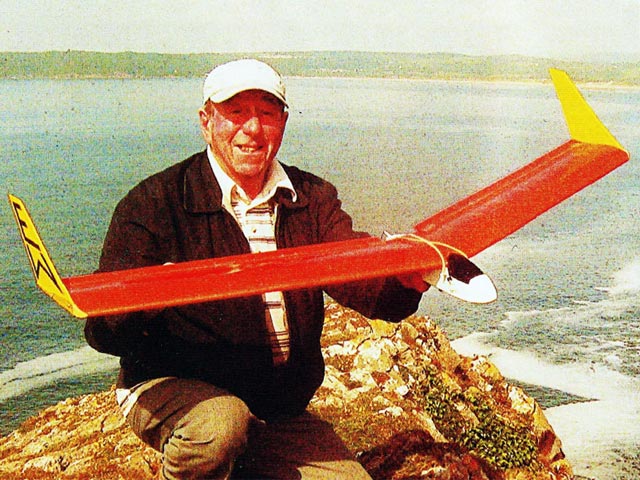