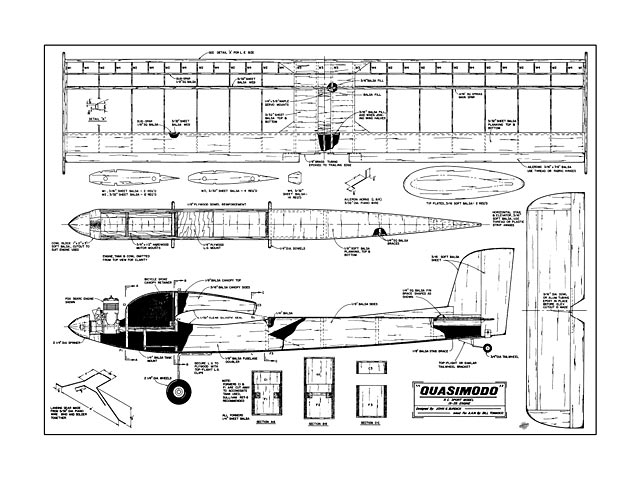 Quote: "The basic design for the Quasimodo series was developed during a rainy vacation. I started sketching what I wanted. A 40-sized sport ship that would incorporate the following features: medium size, light weight, construction ease and good aerobatic performance.

Functionally, if not esthetically, this seemed satisfying, so Quasimodo I was built. Its performance was up to expectations, but its appearance evoked such comments from fellow members of the Poughkeepsie IBM Radio Control and Model Club as: Look at the wing wart! and, What's that thing behind the engine?

Keeping these friendly suggestions in mind, but not eliminating the canopy since by now I'd grown used to it, I built a cleaned-up version, Quasimodo II. The second ship had conventional tips rather than tip plates. The long landing gear had proven too flexible, so LG location was changed to the fuse bottom. This was a fine performer, but on its tenth flight it executed a rolling figure seven and left me with nothing to fly.

To get back into the air quickly I decided to shrink the design to 35 size and simplify it as much as possible. I like to fly with a power loading of about 10 lb per cubic in displacement and a wing loading of 18 oz/sq ft. This dictated a 3 sq ft wing which was laid out first, and the rest of the design scaled proportinately.

When I took it out for its test flight, which proved to be a little hairy, I found out the hard way that aileron movement on a ship this size must be quite restricted. Moving the aileron links up on the control horns cured this and later flights showed that the ship was fast, as well as fully aerobatic and a great deal of fun to fly. At 3-1/4 lb with a good 35, it's about two-thirds demon. With careful wood selection and a lighter radio, a 19 should fly it nicely. My friends still insist it isn't a potential beauty contest winner but I prefer to believe that, as proven by Volkswagen, functional design is beautiful design. So, if you're interested in Quasimodo, start with the sheet parts.

Construction: This is reasonably conventional, so I'll just describe the more important details. You'll see that the plans show some minor differences from the ship shown in the photos but nothing serious. Start by cutting tail group parts, ailerons and canopy sides from four sheets of 3/16 x 3 x 36 in balsa. The stab is glued up from one sheet cut cross-wise; drops are used for the stab tips, dorsal and wing ribs.

Build the wing next. A jig is a big help here, since the wing ribs have no straight lines to rest on a building board. Don't omit the spar webs which add greatly to the general strength of the wing and, most important, be sure to reinforce the wing's center section with fiberglass, since spar braces aren't used. Aileron horns are bent up from 3/32 music wire and bearings are made from 1/8 brass tubing. Tip plates are added after the wing is covered but before it's doped.

The fuselage is built upside down over the plans. Engine and tank compartments should be fuelproofed with epoxy resin or Hobbypoxy. The wing seal is made by taping Saran Wrap to the bottom of the wing, squeezing a bead of Silastic onto the wing saddle..." 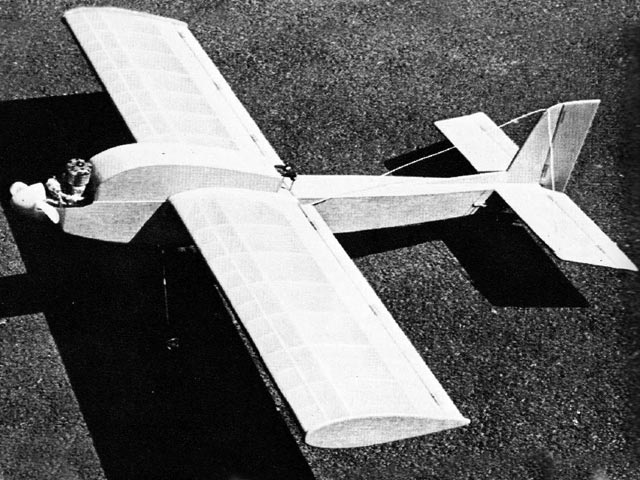