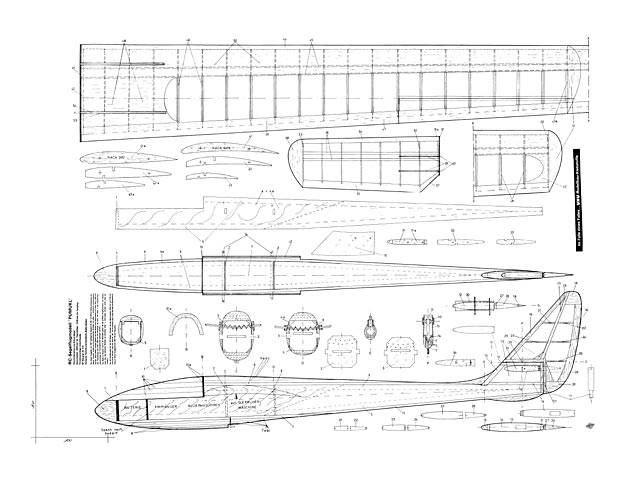 The construction plan enclosed with this issue of FMT for the RC glider Pumukr developed by Erhard Weigt had to be reduced by about 1/4 for technical printing reasons. Built according to this template, the model has a wingspan of about 1850-1900 mm (for thermal flight) and 1500-1600 mm (for slope flight). It can be flown as a training model with a 1- to 2-channel remote control system. The dimensions in the construction plan and in the parts list apply to the larger original version; they must also be reduced by about 1/4 when building the smaller model (round up).

When FMT published the blueprint for the high-performance glider model 'Nymphe' designed by Georg Friedrich in January 1968, no one suspected that soon afterward a friend of our employee would gradually change this model so much that that something completely new really came out of it. Every change got better; and what became of it is a very easy to build and excellent to fly model that largely meets all the requirements of the average model builder.

Who or what is Pumukl? Listener to the children's radio on Bavarian Radio know him as a funny little goblin who goes by this name.

Building instructions: To build the fuselage, first cut out the side wall 4 according to the drawing and reinforce it with part 4a. The glued area is held with a clothespin. Thereafter, the triangular strips 5 are cut and fitted. The V-shape of the steel wires can be seen in sections C-C and D-D. Once these wires have been cut and bent into a 6° V shape, they are sewn to frames 2 and 3 and glued with UHU-plus.

The fuselage side parts 4 are then put together over the frames to form a 'box'. The planking 6 is cut out according to the drawing, glued to the fuselage box and sanded clean after drying.

Proceed in the same way for the underside of the hull; the exact shape of the hull can be seen in sections A-A, C-C, D-D, E-E and F-F. Finally, the nose of the fuselage 9, the skid 8, the tow hook and the skid are attached under the vertical stabilizer.

The bearing of the tailplane, which also accommodates the rudder, is assembled from parts 11 to 14. Once this has been done according to the drawing, part 15 is glued to one side of the HLW bearing, the parts for the pendulum elevator are installed and the planking is closed on the other side so that a stable box is formed.

The vertical tail is then built from parts 1.6 to 29 according to the individual parts in the construction plan. The elevator connecting rib 30 is carefully and neatly glued to the HLW bearing. Here it is advisable to put a piece of balsa the size of this rib under the rib 30 and adapt it to the CPR storage.

For the tailplane, we start with the manufacture of the ribs, which we manufacture in blocks. The pattern ribs 32/33 are made from 1 mm plywood..."

Quite an amusing fact that this graceful and probably very docile sailplane has been named after the highly popular literary figure of a sprite who liked to cause mischief whenever possible. :-)
Martin - 03/05/2022
Peculiar ? Plan shows mid-wing mount of 2 removable wing halves yet photos show top-wing attached with rubber bands. Or am I just not reading the plan correctly ? :)
KvdB - 11/05/2022
Good point. This is just how it was published in the magazine pages. I guess the pics show an earlier prototype.
SteveWMD - 11/05/2022
Add a comment