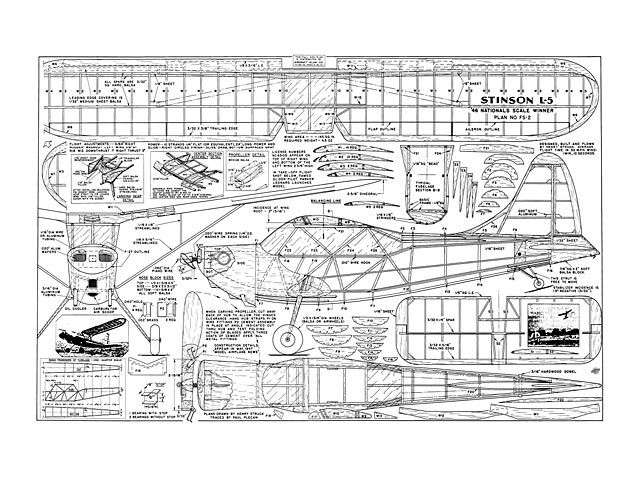 Note this here is the Stinson by Henry Struck as it appeared in the pages of MAN 1947. This design was also later kitted by Berkeley, see Stinson Sentinel L-5 (oz187) for that plan.

Quote: "Nationals Scale Winner, by Henry Struck. Besides being a contest winner this Stinson L 5 is a fine flier.

Premier liaison aircraft of the Army Air Forces during World War II, the Stinson L 5 promises to assume a similar position in the flying scale model field. A high wing design, with tip slots and generous dihedral, large tail surfaces and long moment arm, high power and light weight, the L 5 displayed an astonishingly steep climb and low stalling speed with excellent control. Identical design features are considered essential by most modelers for a good endurance flier - so generally in fact that five individual versions of the L 5 were entered in the National Meet.

Scaled from authentic technical data, our L 5 received a good score for accuracy, detail and finish. After several comic clashes with regulations and weather, the ship was ready to be flown. A conservatively wound early morning flight under excellent conditions turned in a duration of 1'30". Then the wind sprang up and blew with traditional force across the open prairie, as it had done every day - except of course the day before the contest. Any chance of achieving the satisfaction of a long thermal flight with a scale model was thus lost. But at least the ship was able to prove its stability and consistency as equal to the 'contest' jobs flying.

Here we pause to collect a few old boards and bent nails, knock together an unsteady soap box, climb up on it and turn agitator.

There are some who think a flying scale model should whirl on a string, or stagger through the air for a certain minimum time in order to protect a beautiful piece of craftsmanship. No one, of course, wishes to see such a work of art destroyed. But then it ought to be kept at home to be admired and the flying left to the birds that can take care of themselves. The very sensitivity to adjustments of a flying scale model teaches one the effect and value of each minute alteration, also the characteristics of various aerodynamic arrangements. Rather than getting into a design rut, an interested modeler can go on from there equipped with sounder experience to aid him in developments of his own.

More free flight flying scale events, gas or rubber powered - with less emphasis on paint and feathers to reduce time wasted in 'judging' - will give ships of this type an opportunity to show what they can do in the air. Probably a set of templates against which the form (or configuration as the engineers call it) could be checked would provide ample inspection. This we believe would make for more interesting modeling.

Crash! Well we were up on that soapbox too long anyway!

Buidling the L-5: The general assembly view is drawn one-quarter size. It will be necessary to enlarge only the fuselage basic frame side view, and the wing, stabilizer and fin plan outlines to full scale. Information for this can be found on the assembly drawing and supplemented with the full size templates.

Pin the longerons of 1/8 sq hard balsa on the side view and fit uprights and diagonals of 1/8 soft balsa. Build both sides together, one on top of the other to get them exactly alike..." 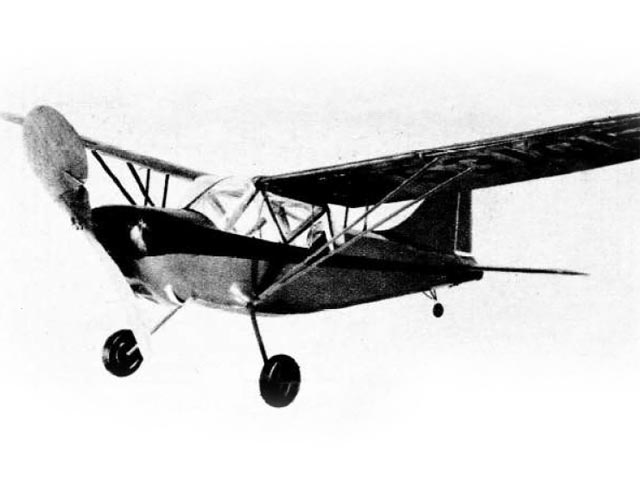 A beautiful plan, ditto for the cleaning work, it looks like it was printed yesterday. Thank you, Mr.D
Miguel - 01/05/2022
Add a comment