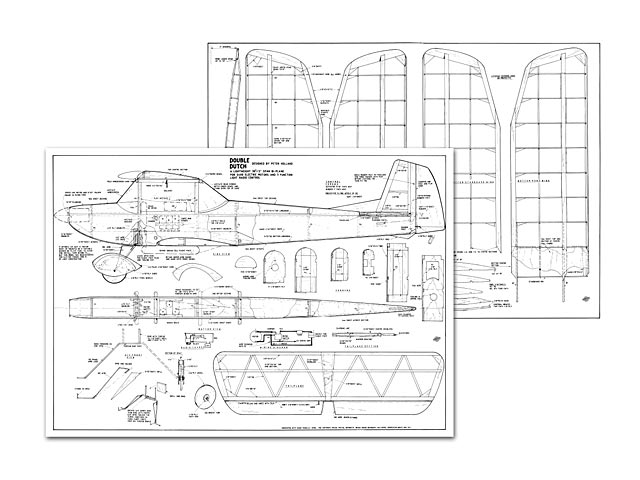 If you ward to have a quiet, relaxing flying time in those not too blustery summer days to come, this is the model for you! Double Dutch was the natural name for a double winger by that chap Holland. In the air it is steady and liesurely, viceless and attractive. One might say reminiscent of those free flight days, but with the assurance of being able to put it where you want to, and to keep it near enough to appreciate its lines. Peter teils you how to make it from your full-size plan:

Many older modelling friends remember Bi-play (oz339), one of my free flight model designs, popular in the Aeromodeller Plans Service. lt was built in the mid 1950s. A little .8 cc DC Merlin diese! would get it way up, more by using the large wing area and light weight, rather than by speed, in fact we would play tricks like making drastic trim changes so that we could fly it without the top wing, or without the bottom one. The four panels were of the plug-in type, so I even tried port upper and lower starboard panels together, with tip weight and rudder (because the top wing was longer spar than the bottom one!) Eventually it was lost in a thermal, which had no respect for light sports models.

I was encouraged by the editor to revive the design for R/C. A look at the old APS drawing showed that a straight conversion would not get the best out of electric power, if some of the old floaty flights were to be made oontrollable.

For a start a cabin biplane, streamlined as the Bi-Play was, still had too much fuselage drag, and the wing area was a bit more than would be needed, even with the payload of light radio and simple up to date electric flight gubbins, to increase the flying speed a bit. I did not wart to find it going backwards in a light breeze. so 'Double Dutch' was born.

The construction of the predecessor, though light, was a little over designed for its earlier task. The wings are now to be one piece each, saving weight. But, with no down wind cartwheel free-flight arrivals, the only stress point would seem to be near the flight pack which, being external. does its own thing, rather than pushing the mode) if put down too heavily.

You may ask, surely a little free flight job will have to be beeted up to carry the gear and battery? Will it heck! More beef weighs more. More weight brings more stress, more inertia, and less performance for a given motor/battery combination. Now I like the lines of that old model, so I set about changing the rigging angles, a vary slight reduction in dihedral, a bit less span and a more forward CG to make it radio controllable.

The fuselage front view has been on a diet (half the width). Now the width is just right for P-SD 3000 servos mounted crosswise, and because access can be gained above and below, you do not have to possess violinist's fingers to get at 'em.

I know wheels are a luxury for those performance electrics, but I think a biplane looks funny without them. In any case, the CLA had been sorted out in the old design. The new wheel spats are dead slim, thinner than a standard wheel alone, thanks to the use of thin ply instead. This combination slips through the short grass too.

I wanted the minimum of complication and a low cost method, so a Speed 400 was housed in a paper tube up front, driving its own 6 x 3 folder prop. This would improve any glide stage of the flight. Now with a slow speed model such as this, a small prop is not so efficient as a larger, geared combination on the same motor. That is the price of simplicity. There is plenty of depth in the nose however, should you wish to use the geared S 400..." 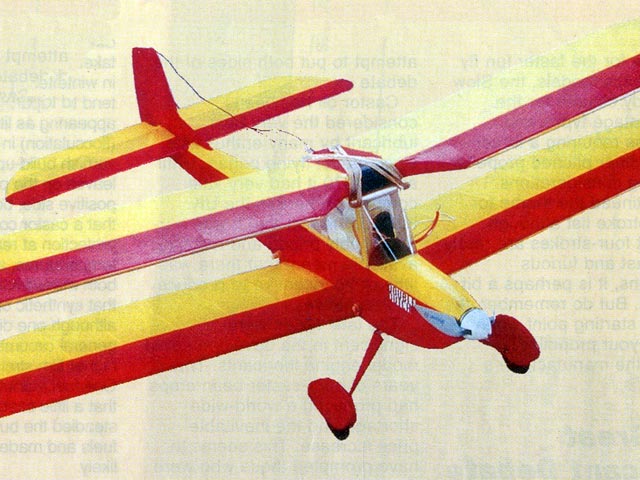