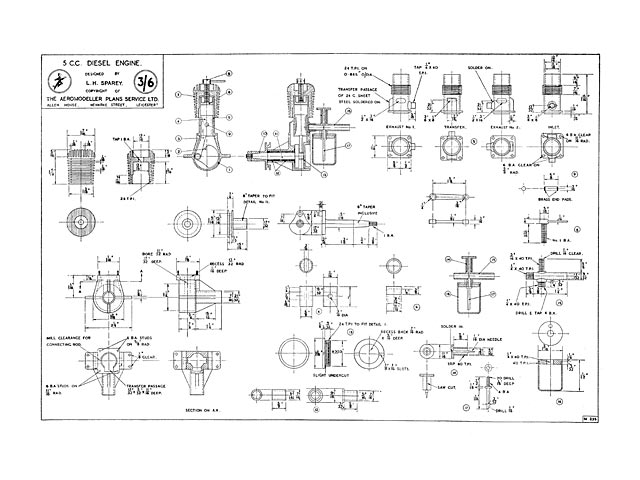 Note the Sparey Diesel was first published in Aeromodeller May 1946. This planfile here is the Sparey as featured in chapter VII of the 1947 book 'Model Diesels'.

IN offering building instructions for this 5 cc diesel engine it is appreciated I that, in effect, we are contradicting our frequent stern warnings that the diesel is beyond the scope of the amateur mechanic.

We will go even further, and commence these instructions with a similar grim warning of the 'abandon hope all ye who enter here' variety, we still say that this engine is beyond the skill of the average amateur mechanic. But that does not mean we do not wish to encourage all and sundry to try it. Where there's a will there's a way, and we shall feel more than satisfied if one out of ten of those who start it produce a sweet-running model engine for their pains. The other nine will have learned quite a lot in the process, and we be them to continue the good work; if they do - and a large number will, we are sure - then, according to the native skill that lies dormant within them, at the second or third attempt they, too, will produce a diesel that really goes. And, rest assured, they will have earned the right to call themselves model engineers in so doing.

Now for a more cheerful aspect of the business, before you set to work. This design has been available as plans and castings for some months, during which time several hundreds of plans have gone to all parts of Great Britain, to Sumatra and the Far East, to occupation troops in Germany and, in fact, to all places where there are enthusiasts and facilities for turning. Of that number we have had reports at all stages of the work, asking for advice, reporting progress, or forwarding tips to help in its construction. Some have sent photographs, one or two have passed along their actual engines, and, frankly, we are delighted with the skill shown.

At the present time upwards of 50 successful engines have been completed - which is well above the depressing average we have suggested. So, good luck and go to it!

It is interesting to know that the prototype of this engine has done several hundred hours of running, and has been demonstrated before many of the best-known Model Engineering Societies in the country. It has always performed with unfailing satisfaction; has always started with ease and regularity, and does, at the moment, show no signs of its strenuous life. Thus, one of the chief armchair criticisms of this type of engine, namely, the possibility of a short running life, has been disposed of, and it has been demonstrated that provided the correct materials are used in its manufacture, the miniature diesel engine can be as long-lived as its petrol counterpart.

Before launching into a general description, it may be as well to state that, although the parts are relatively few and simple, a high degree of engineering skill will be necessary before a successful replica can be made. This is particularly so in reference to the cylinder bore, and to the fit of the piston within it. The fit and finish of these components must be beyond reproach; yet, lest it be imagined that extensive and complicated machinery is needed, it can be said that the original was made solely by the aid of a 3-1/2 in lathe and a drilling-machine. Care is certainly necessary, but we emphasise this not in order to make the job appear unduly difficult, but to put the would-be constructor on his mettle from the start..."

Quote: "Hi Mary and Steve, It's been ages since my last plan submission - I hope you are both well. An engine plan this time as you've started doing those. Scanned from the 1947 book "Model Diesels" it is for the Aeromodeller 5cc Diesel. Article and plan together. I have redrawn/patched the plan to eliminate the center crease but couldn't do much with the photos. All the best, RMC"

See also http://www.modelenginenews.org/sparey/five.html for a very good and detailed page with over 60 photos (sampled here on this page) showing Ron Chernich's build of a Sparey Diesel. 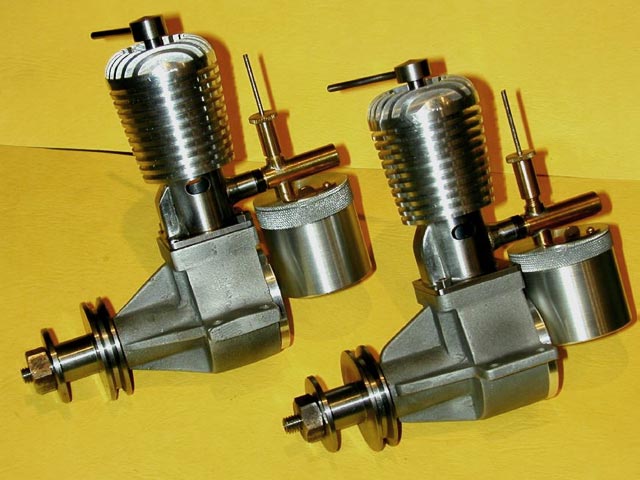