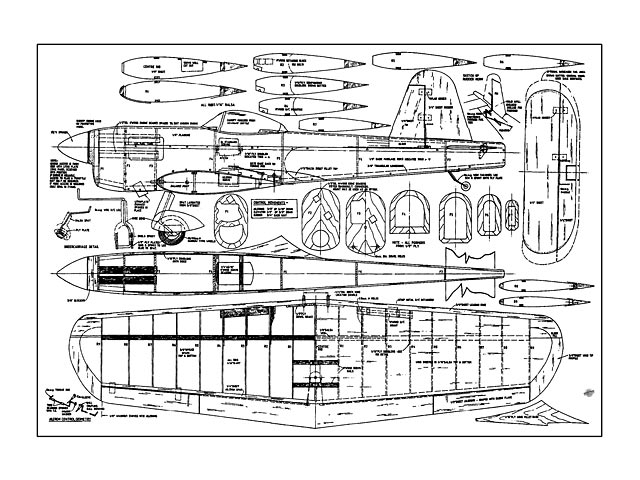 Quote: "A sturdy conventionally built all wood 41 in span WWII fighter prototype, for 4 functions and .25 power.

The single-seat Miles M.20 fighter was designed in the summer of 1940 in nine weeks from initial start to flying the first prototype (I take as long on many of my R/C models!). The reason for the haste was of course the Battle of Britain, which was being fought over the factory and the south of England daily. The Miles brothers saw that the Spitfires and Hurricanes could dwindle with not enough replacements, so a quick to build fighter was urgently required.

The M.20 used a lot of the Miles Master parts, but with a 1300-hp Rolls Royce Merlin XX power taken from the Lancaster and Halifax production lines. Built mainly of wood and ply, it was decided to use a fixed undercarriage with spats to save weight and the complications of hydraulic retracting gear. The wing was sturdy and thick, carrying eight fixed forward-firing .303 inch Browning machine-guns with 5000 rounds of ammunition and 154 Imperial gallons of fuel offering twice as much range and ammunition as the Spitfire and Hurricane.

The speed was faster than the Hurricane, but slightly slower than the Spitfire, with a superb roll rate. The B of B was won by the Hurricanes and Spitfires with some aircraft still in reserve, and so the need for the M.20 did not materialise.

This is the one I have chosen to model. The fuselage is longer and I think the undercarriage spat fairings look better. I have long fancied a fighter type aircraft but I don't like to see fixed undercarriage on retractable scale subjects. The M.20 gets over this problem by having a fixed u/c and spats.

The Model: Now for a brief description of my model. The power is an OS.25 FP and is ample power. The span is 41 in with all four main control functions controlled by a Futaba Skysport radio control set. The fuselage has a basic 1/8 balsa sheet fuselage sides framed up on 1/8 ply formers. The turtle decking is 1/4 x 1/8 planking and the sides are doubled with 1/16 ply back to behind the wing seating.

The engine bearers are 1/2 x 1/2 beech set diagonally, so hopefully the silencer is accommodated into the radiator cowling - tricky, but worth it. You will have to check your individual motor mounting to achieve this as the plan is designed for the OS engine. Could be a point to use a commercial mount fixed to the firewall, but the hardwood bearers do make for a stronger model. The bearers have to be chamfered to achieve tank clearance. A 4 oz MFA tank was used on the prototype. The spinner is 2-1/2 in dia. with most of the cowl built around the motor access through the side with a litho plate cover panel screwed into place.

If you have a good reliable engine the only access you should need is the carburettor and the glow plug. Any further cut-outs can be re glued with cyano after securing the engine, or at least that's my logic in this particular case. With the large 'beard' radiator and close cowling I wouldn't come up with a better idea. Trust me, it works - well it did for me!

The two wing fairings are from 1/16 ply and should be fitted with the wing in place. Use a microballoon filier mixed with epoxy to make a paste for a good fuselage-fairing finish, and sand to shape when hardened.

The tail wheel is made from 16 swg and sewn onto a small ply plate set into the fuselage rear underside. Some epoxy-paste filier here will assist in strength also.

Wings: These are built on 1/4 x 1/8 spruce main spars top and bottom with 3/8 sheet balsa leading edge. There is a 1/4 in sheet sub-spar trailing edge. The wing is built upside down on the building board to establish the flat topside, and the resulting dihedral is built-in on the underside only.

The ailerons are shaped from 1/2 balsa sheet with 1/8 in washout at the wingtips (remember your are upside down!). The main trailing edge is two laminations of 3/8 balsa sheet shaped after the wing is sheeted with 1/16 balsa top and bottom. The torque rods are sleeved 10 swg piano wire bent vertically on the ends..." 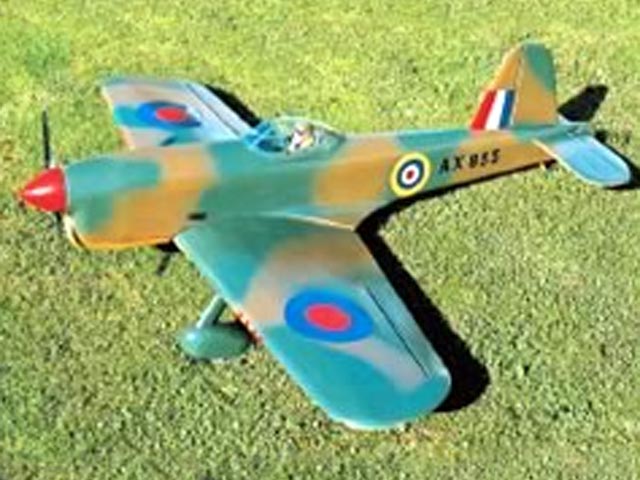