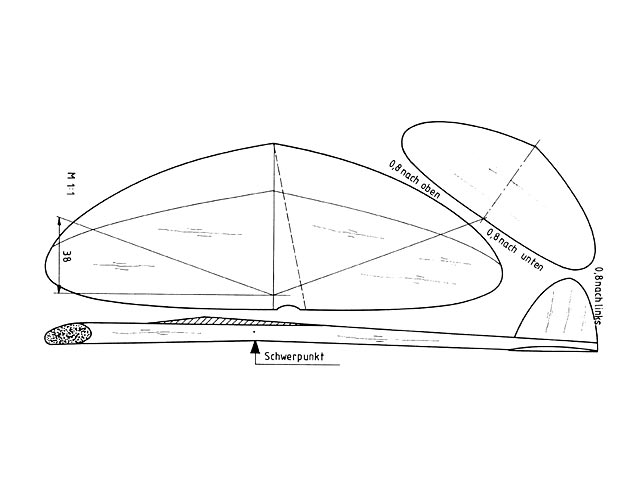 Quote (translated from the German): "You don't always need expensive competition models to convey the joy of model flying. In the previous two issues we presented indoor flight models with which exciting competitions can already be held in gymnasiums and clubhouse halls. If you don't like flying in an enclosed space, we refer you to an outdoor model aircraft sport that, for inexplicable reasons, doesn't want to gain a foothold with us: flying gliders.

These models, with a wingspan between 250 and 600 mm, are mainly made of all-balsa construction, only rarely in skeleton construction. They are launched by holding the fuselage with the thumb and ring finger, placing the middle and index fingers behind the reinforced trailing edges of the wings and attempting to throw the model as high as possible.

The difficult thing now is not only to reach a good altitude, but also to convert the altitude reached into as long a flight time as possible by transitioning to the normal gliding attitude without loss. Experts speak of a throwing height of 30 m, which I think is exaggerated. However, the flight times are reliable without thermals at 60 seconds.

The problem with these models, in addition to the throwing power, lies in the exact manufacture of the wing and rudder warping which have different effects at different speeds, and last but not least in mastering the throwing technique. For a lossless transition from power plant to gliding flight, a launch precision is required that is in no way inferior to that of an F1C model. The models are launched in a right-hand turn (for right-handers) and should be in the intermediate phase between right and left turns when transitioning to normal flight. Since the models are very thermally willing, they also have a thermal brake.

A small model of typical construction, called 'Bemm-Jack' in Saxony because of the shape of the wing, is presented in the adjacent drawing. We use 3 mm balsa (hard) for the fuselage and 3 mm balsa (soft) for the wing. The two tail units are made of 0.8 mm thick balsa. The bottom of the right wing is provided with a 1 mm thick plywood reinforcement in the middle, since the right middle finger gives the starting momentum there.

An important criterion for throwing gliders is that the adjustment angle difference between the wing and tailplane is zero to avoid the model looping due to the take-off momentum. Despite this, the center of gravity is between 50 and 80 percent of the wing depth, depending on the size of the tailplane and the length of the rear fuselage."

Note this planfile has been extracted from the raw magazine scan of Modellbau Heute 1980-09, as posted on the HPA site by rrfalcon (see datafile).