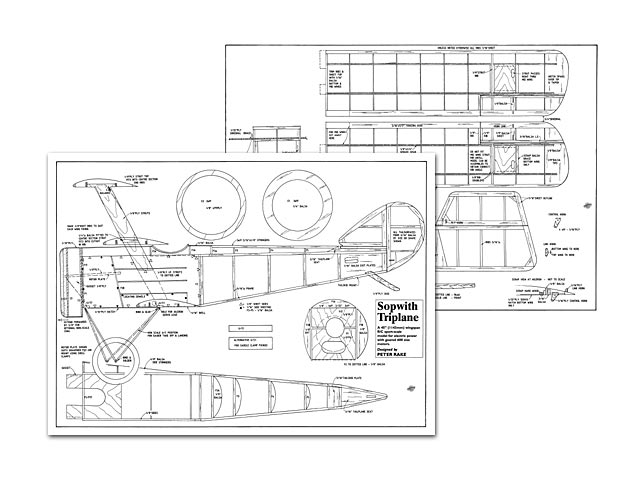 Quote: "Full Size Plan feature. Sopwith Triplane. A truly international 45 in span electric model, designed in the UK by Peter Rake, with test models built by Robert Hoffman in the USA and Rodd Perrin in Australia.

Of all the fighter aircraft produced during WWI the Sopwith Triplane possibly had more effect on fighter design than any other type. Although her service career was relatively short-lived, and despite only being produced in quite small numbers, virtually every other combatant nation was sufficiently impressed with the little Sopwith to produce triplanes of their own. However, apart from the most famous of them all, the Fokker Dr1, virtually all the others disappeared into rapid obscurity. Considering what monstrosities many of them were, that is not necessarily a bad thing.

The model:As usual with my designs, this isn't intended as an exact scale copy of the full-size air-craft. It is an easy-to-build scale model of the type that you are likely to see at your local flying field most Sunday mornings, very representative of the original, and capable of being well detailed, but not 100% scale.

In order to avoid the problem of assembling three wings, complete with ailerons on each wing, every time you fly her, she has been designed as a one-piece model. That is not to say that, with minor alterations, she couldn't be built to disassemble, just that it's an awful lot of bother on a model that will fit easily into most family cars in one piece.

Also, like many of my models, she is intended to take advantage of economy power plants and just seven or eight-cell battery packs. As drawn, the intended motor would be one of the 'hotter' 600 types mated to either a Graupner or Master Airscrew offset gearbox and retained using shell clamps. However, that isn't to say that other motor and battery combinations can't be used in the model. Just to prove the point, while Rodd has fitted his model with a 4:1 geared ND10 motor and 10 x 3000 mAh NiMHs, Robert's model flies extremely well on more or less the combination I had in mind - a Graupner Speed 600 (No.6309), a Master Airscrew 2.5:1 gearbox and eight CP2400 Ni-Cads.

Wings: Before starting assembly, study the fuselage plan and familiarise yourself with the different way each wing is fitted to the model. The top wing, which is built and joined to the centre-section with ply dihedral braces is the one that sets the dihedral for all three wings. The outer centre-section ribs are cut to seat accurately onto the ends of the ply centre-section struts.

The middle wings, which have the 1/4 x 1/2 in balsa extensions, have their root ribs slotted to fit accurately over the 1/4 in square balsa strip fitted to the centre-section strut, and also have the two inboard ribs of each panel trimmed back to allow for the top sheeting to be fitted.

The root bay ribs for the bottom wing panels are also trimmed for sheeting, but these wings rely on the 3/16 locating dowels to ensure that they go on at the correct incidence angle. In addition to these points, all ribs inboard of the aileron servos will require the hole for the aileron servo extension leads to pass through..." 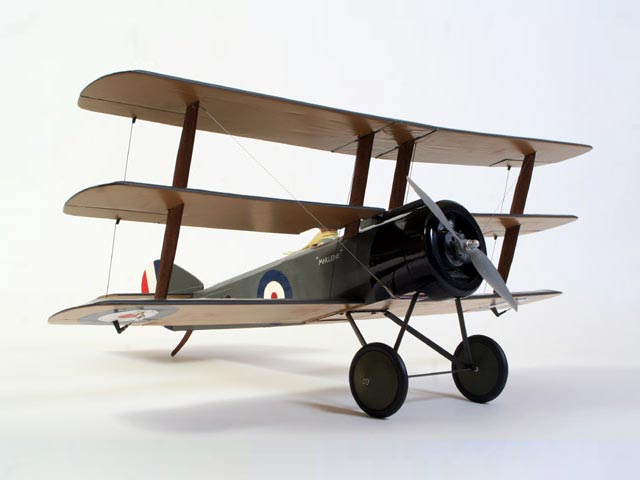 Hello Mary, I was delighted to see the plans for Pete Rake's Tripehound uploaded to the OZ, which features photos of my own build of Pete's design. I built the model back in 2003 from Pete's plan, but made quite a few changes; Although designed as a one-piece model, I opted to make each cell of wing panels removable as plug-in items to help with storage and transport [pic 005]. I didn't bother with the suggested S600 brushed motor, but went straight to brushless power, with an AXI 2820 outrunner. In order to get the weight as far forwards as possible, I arranged 9 x 1300 nicad cells inside the cowl to suggest the cylinders of the original rotary engine [pic 006]. This worked well until the nicads died after a couple of years, and then I squeezed in a 3S 2700 li-po right behind the front bulkhead [pic 007]. The model is covered in Solarfilm Polyester film. Thing is, 19 years down the line, and the Tripehound is still airworthy! It gets aired a couple of times a year at the club field, and performs surprisingly well.
Tim Hooper - 26/04/2022
Add a comment