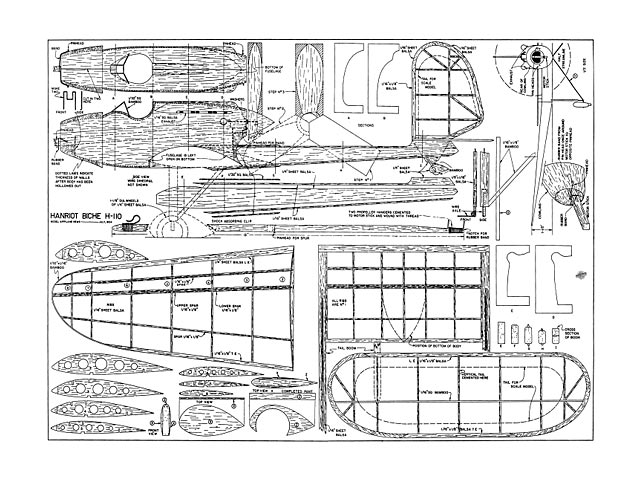 Quote: "Building the Hanriot-Biche Pursuit: Plans and Instructions to Build of the Most Unusual Modern French Pursuit Planes By Elner Pilzer.

One of the most unique products of France's new air policy is the new Hanriot-Biche low-wing pursuit plane. Unlike other planes in its class, it is a pusher, powered with a geared and super-charged 600 hp Hispano Suiza engine. As it is water-cooled, a ring type radiator is used. This is mounted on the nose of the nacelle and enclosed with an NACA cowling. A unique feature is the location of the two gas tanks in the center section of the wing. In case of an emergency, both tanks may be dropped free of the plane.

The all-metal propeller has three blades which can be adjusted to any pitch during flight. The twin machine-guns that are of Chatellerault make, fire through the bottom of the cowl. All controls are of push pull rods. The controls for the tail pass through the tail booms on ball bearings.

Data on the performance and top speed of the Hanriot-Biche has been kept secret by the government, but it is understood that it has made a speed of 240 mph. It is secretly planned to have the entire landing gear retract up into the wing.

You should have some interesting moments while building and flying this model. Study the plans and follow the instructions closely before you start.

Wings: Before starting to blind, first trace the drawing of the left wing on a sheet of transparent paper. Then, by turning the transparent paper over on the opposite side, the right hand wing will show through the paper. Proceed by tracing and cutting out all the ribs of 1/16 sheet balsa. Note: All tracing is done with carbon paper and all patterns are cut from thin cardboard.

Some model builders will not go to the trouble of cutting out the lightening holes for the ribs, but those that will, may burn the holes out with some round tool that can be heated over a flame. I've found that a large nail punch is very handy in burning out the holes.

You may now start the wing by pinning the lower leading spar on top of the plans, which should already be covered with transparent wax paper. Ribs No.2 and 6 are now pinned and cemented in place. Now taper the leading edges into the correct shape and pin them and the trailing edges down on top of the drawing. They are then lifted up until they are even with the front and rear of the ribs. Then continue to cement all the remaining ribs in their respective places.

While this is drying, boil two pieces of 1/32 x 1/16 bamboo and pin them around for the wing tips. Now cement in the remaining spars and proceed to build the center section wing in the same manner.

After the wings are left to. dry over night, remove them from the plans and sandpaper the leading and trailing edges into the correct shape. Then cut off all the obstacles that may project through the covering and sandpaper the entire three parts of the wing..." 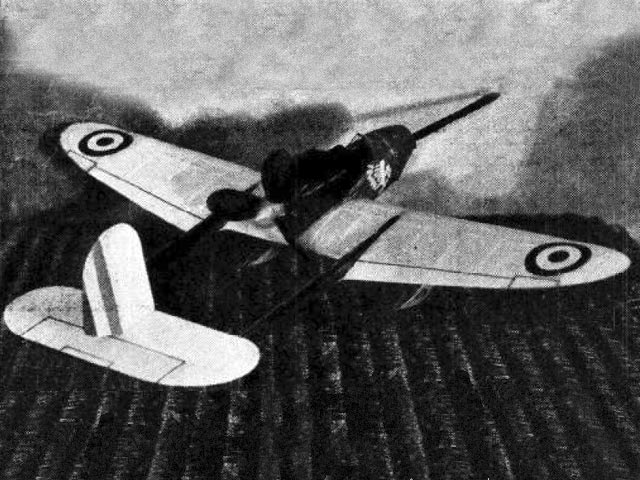