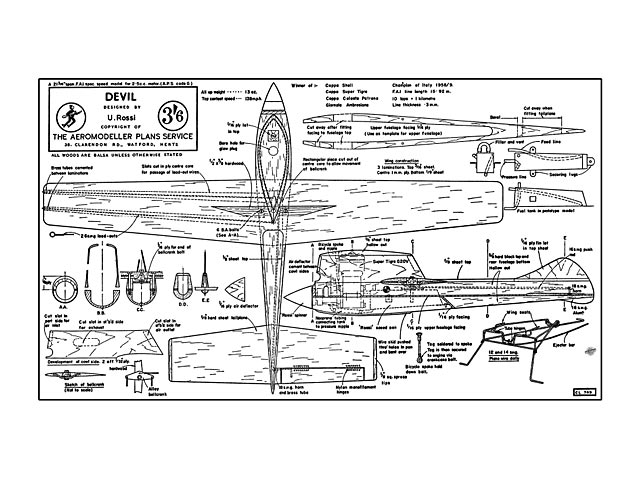 Quote: "Most successful FAI specification speed design in Europe. Champion of Italy, fastest at the Criterium of Aces. Devil, by Ugo Rossi.

THOSE WHO FOLLOW the Italian competition results (which include more speed events than held in, any other European country) cannot fail to be aware of the famous Rossi brothers, Ugo and Cesare, who conduct their model business in Brescia, During the week they make 'Vulcan' glow plugs which are fitted to the majority of Italian competition engines, and they also cast their special speed pans and turn spinners for speed models all to a very high standard of engineering. In addition to this they run a formidable stable of speed models and offer re-worked Super Tigre G 20V 2.5 cc glow-plug engines for sale to fellow-enthusiasts.

In the past two seasons they have eclipsed the opposition in practically every speed contest and these include well-supported events with large entries, notably the Shell, Super Tigre, Celeste Patrona, Giornate Ambrosiane Trophies, and also the Italian speed championships both in 1958 and 1959.

In this year's national championships the Rossis won 2.5 cc, 5 cc, 10 cc, and jet speed! It was no surprise, therefore, when Ugo Rossi collected first place at the Criterium of Aces in Brussels during September with a magnificent highest speed of 138 mph. Cesare Rossi placed third with 130.5 mph. Both models employed the new version of the Super Tigre with its flat top piston.

Devil is quite a simple model to construct, and although based on the Super Tigre with the Rossi speed pan there is no reason why the main airframe cannot be adapted to take any other equipment, motor and mounting unit. The construction is typical of that used by all the leading Italian speed experts with a ply sandwich wing, balsa fuselage, ply cowl sides and separate intake for the front rotary valve on the Super Tigre. A pressure feed tank is employed, taking air feed from the positive pressure side of the crankshaft valve for which the Super Tigre has a special tapping plug under the crankshaft bearing. One of the most impressive features of the Rossi brothers' flying in Belgium was the way in which they soon work their engines up to peak speed after take-off by 'yo-yoing' the model, pulling it back rather than attempting to whip it up to speed. Needle valve setting for pressure tank systems has been said to be critical and certainly this demands a considerable amount of practice to obtain the optimum setting.

The Rossi brothers took every opportunity to check their models during practice periods at the Brussels competition and no attempt was made to preserve the motor for any particular maximum effort.

For anyone aspiring to a world championship team place for the international contest at Budaors, Hungary, next September we recommend the Devil as a fine airframe in which to mount the best of motors." 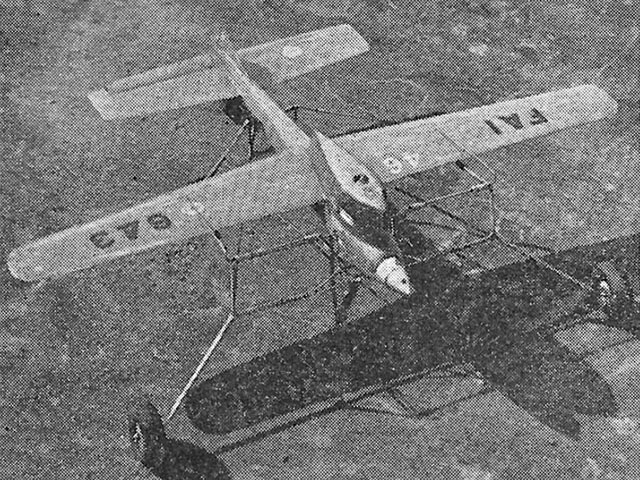