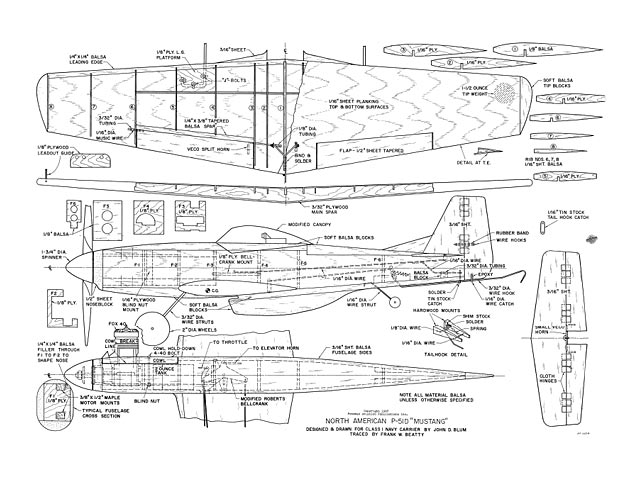 Quote: "Navy Mustang. The famed Air Force P-51D makes a unique and highly effective Class 1 Navy Carrier model. It even has a Navy heritage, having been modified for experimental carrier usage. Up to .40 engines. By John Blum.

It can be safely said that one of the most loved aircraft in military aviation is the North American P-51D. What enthusiast doesn't have a small place in his heart for the sleek, fast-moving Mustang? Quite possibly it has become the most modeled airplane in history.

There were many forerunners to the famed 'D' model, but this configuration came into being in the latter part of 1944 and was most widely used and best known. The effective use of this aircraft during World War 11 prompted its use by many foreign countries, even as late as 1960. Following the War, numerous P-51's were used in the popular Air Races, and some were adapted to private use and became collector's items. For the detail minded enthusiast a comprehensive story on the P-51 is available through Profile Publications, sold at most hobby shops and by numerous magazine suppliers.

To the writer's knowledge, previous contest-worthy models of the famous Mustang have been confined, for the most part, to Scale competition. Overlooked by many modelers is that experiments were conducted in 1944 aboard the U.S.S. Shangri-La to test feasibility of adapting the Mustang as a carrier-based aircraft. Modifications were made to install an arresting hook and to insure proper strength requirements. Numerous test flights were conducted. The P-51 D design is suitable as a multi-event model, both Scale and Navy Carrier.

Several years back when Navy Carrier was flown as one class, the problem of selecting and building an aircraft was tough enough. Then, as now, most modelers sought a kit. Since all engine displacements were thrown into one class the hopefuls naturally built a .60-powered model. If you where choosy, you built from scratch; if you just wanted to compete, had a choice of a limited number of kits, perhaps paying the penalty of the selected kit having been designed to sell rather than being designed for the event.

In 1963, to instill life into the event, AMA adopted a set of rules establishing two classes of Navy Carrier: Class I, up to and including .40 cu in position displacement, and Class II, .41 cu in displacement, and larger. Consequently, if poor model availability was a problem before, it surely increased with the advent of two classes! To build for the event was a magnified problem.

The experimental clause in the Carrier rules creates a much wider range of choice once the modeler decides on basic design characteristics. However, once these are known, he may still be required to wade through stacks of various aviation magazines. As time passes, he makes his great "discovery" only to find his problems are compounded by the scarcity of working three-views! Now, for the scale-builder and the do-it-yourself-from-the-tree boys working from a vague three-view is normal. So the average Carrier flyer may have a few problems.

We must think of designing for this event as we would for any other. Just as we cannot enter a stunt ship in Speed or a rat racer in Combat, we could not enter just any plane in Carrier. Results would show it. The Navy Carrier event is a distinct 'breed' and must be approached as such for maximum results.

The advent of two classes was a boost. In 1963 and 1964 interest gained momentum but new things were coming. Class I scores ran approximately 370 to 420 mph with top speeds near 90, and lows near 30. Many times, the landing separated the men from the boys, with a good speed run wasted when the landing didn't get 100 points. The event gained momentum, but available airplane kits or plans designed for the event did not keep pace. At one contest all the Class I contestants entered the same design! After several seasons of hard competition, Class I is bringing out new creativity and products; next season should be better. There are more designs available now for Class I than Class II. Class II success is based largely on one airplane; a kit. Class I has not settled down to this as yet.

If you are a newcomer to the event, or even more important, if you are starting Navy Carrier as your competition event, it is important that you understand the AMA Navy Carrier rules. From them you can outline a precise approach to accomplish the ultimate. Listed are several major points to follow..." 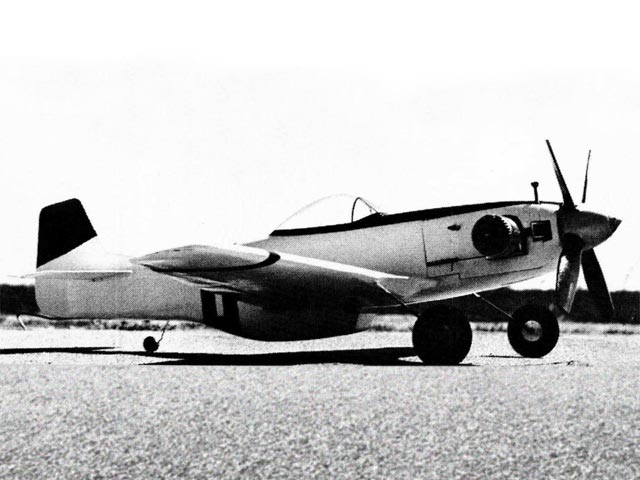