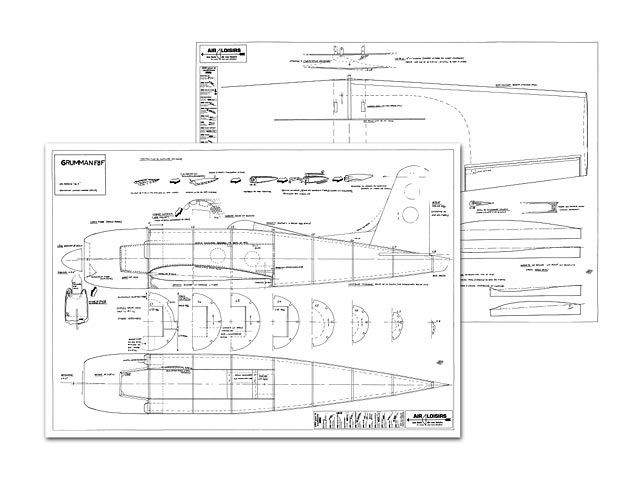 Quote (google translated from the French): "All beginners are disappointed when they realize that it will be necessary to build a certain number of 'flying boxes' before one day piloting a model, especially of a fighterr or a racer. After two learning planes and a Gee Bee Sportster, I started looking for a model subject that would be easy to fly, with a few modifications.

First problem: I practically only like racers, which didn't make the choice of model any easier. Pre-war machines have tiny wings and/or huge engine cowlings. So much for the Gee Bee R1 and the Keith Riders - for now. The more recent racers, all descended more or less from fighters, have more reasonable proportions for a small model.

After studying many 3-views and photos, I realized that the Bearcat was not the most difficult to reproduce, contrary to appearances: the wings, even truncated, have a large surface, thanks to the important cords. The fuselage is not as short as its pot-bellied appearance suggests and the stabilizer is larger than most other fighters. Despite the warnings of my colleagues (a bit of a killjoy!) I started designing my first personal plane last September, having found no Bearcat plan (at least in French magazines).

I wanted it 'very small' because it's easy to build and above all economical. No undercarriage, because it's heavy and it's not serious in flight on such a model; no daggerboard for the weight as well. The lines were drawn from photos and the proportions of the bearing surfaces were slightly modified after reading the design file of Looping among others.

Historical: This paragraph seems necessary to me, given the number of Bearcat models encountered on the ground to date. This aircraft is part of the last generation of piston engine fighters and was intended to be embarked. Its performance is similar to that of the Sea Fury and the latest versions of the Spitfire or the P-51H.

The plane chosen is the famous (I thought) racer of Darryl Greenamyer, seven times winner in Reno including six times with this Bearcat. The only device specially prepared for the races organized in 1964, it underwent a program of modifications over several years until 1969, when it confirmed its superiority over the racers of the time by setting a new record of FAI speed over three kilometres: 777 km/h.

In addition to the modifications that have now become classic (trimmed wings, small canopy, lightening of the cell, aerodynamic refinements and pushed engine), this machine has received some unique improvements: the flaps remain fixed, the air intakes from the apex of the leading edge are removed and the landing gear can only extend and retract once, with a nitrogen pneumatic system. All this saves weight and finesse, but unreliability deprived the aircraft of two more victories.

Construction: Weight is a big concern on a small model. Think of all the details, weigh your wood; but there is no point in buying 'feather' balsa, it is enough to select the boards from a good quality balsa, that's all. If necessary 'make holes' wherever it does not seem to weaken the structure.

The fuselage: The construction of the rounded fuselage scared me a little. I finally chose a somewhat outdated method, the two half-shells. After having reproduced the location of the half-couples on the tracing paper, these are fixed by gluing the 5x3 sticks. Don't forget that there is a right and a left half-fuselage (I'm not kidding readers, I almost blundered).

For the engine support and the frames located before and after the wing (C1 and C4), choose plywood. Then I made the formwork in 15/10 balsa, but I recommend 20/10 instead, which will then allow you to sand the inevitable mistakes. It is not necessary to make very thin slats, but do not make them too wide either (otherwise beware of bumps, even by wetting the wood before gluing). Start in the middle, and glue the two fuselage halves when they are cased about 2/3..." 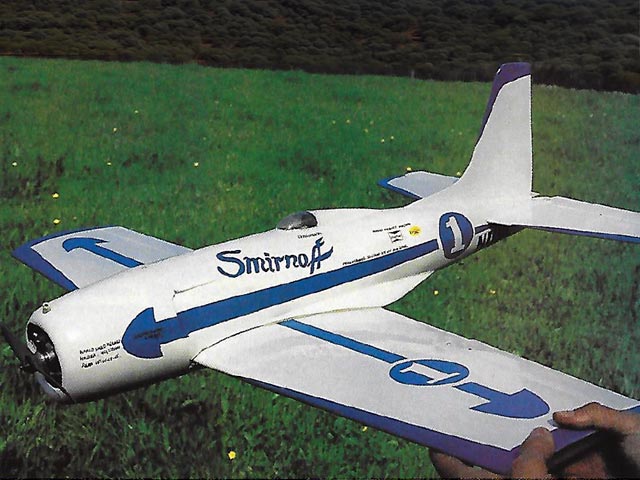 Love it, thanks for posting.
Rick Wallace - 14/04/2022
Does anyone have the article for this one? Am not actually sure if the title for this plan should be 'Rare Bear'. Maybe it's just Grumman F8F, that's what the title block says.
SteveWMD - 16/04/2022
Until the article shows up I'd call it Grumman F8F Rare Bear. In my eyes, the 'Rare Bear' is important. It even has its own Wikipedia article :)
Hubert - 16/04/2022
Steve, 'Rare Bear' is an F8 that was highly modified as a Goodyear racer
Daithi - 16/04/2022
Rare Bear is a specific F8F Grumman Bearcat modified for unlimited racing.. It is not a generic name used for every racing Bearcat So you are right. Regardless of which would be the correct name for this plan, it should not be Rare Bear.
RC Yeager - 16/04/2022
Yes I know the Rare Bear. Thanks. My question is: when this plan was published, what title did it have?
SteveWMD - 16/04/2022
I've seen only the summary of the mag on the net; it simply says "Bearcat".
Pit
pit - 16/04/2022
This is Conquest 1 the highly modified Bearcat flown by Daryl Greenamyer it was the first plane to beat the piston engine speed record set by Gremany in 1940S plus many Reno wins its located at the Smithsonian Udvar Hazy museum in American Jet livery fabulous plane to see
Tim Winn - 18/04/2022
One of the French ebay ads for the magazine has the contents page: https://www.ebay.fr/itm/382428375619?mkevt=1&mkcid=1&mkrid=709-53476-19255-0&campid=5338722076
There, it is just called Bearcat, Reno racing version. The shape shown on the plan is a decent match for Greenamyer's Bearcat.
perttime - 18/04/2022
Got it, thanks. Ok, I think it's safe to say this plan has little or nothing to do with the Rare Bear. It's either a generic Reno racer F8F or it's the Conquest I. But either way the current title of Rare Bear is unhelpful. Ok, am changing the title now to Grumman F8F Bearcat Reno Racer.
SteveWMD - 18/04/2022
Ok, solved now. We have the original article thanks to Alain. Basically, looks like the mention of Rare Bear in the initial plan submission was a mistake. We get there in the end.
SteveWMD - 19/04/2022
Add a comment