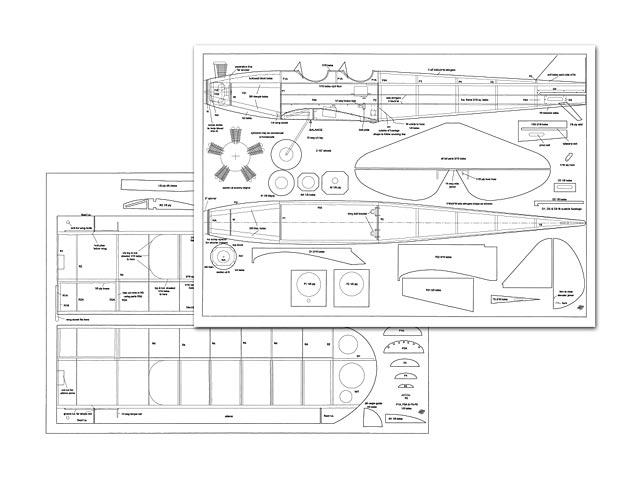 Note see build thread by Pat Lynch of the original prototype on RCGroups at https://www.rcgroups.com/forums/showthread.php?564565 for lots of great pics, including several (sampled here) of the second prototype, built by the designer Peter Rake himself.

Aha. Turns out there was an article in RCMW.

Ryan's Daughter was first conceived several years ago. At the time, I had just a vague idea of how I wanted the model to appear, something along the lines of a US style low-wing trainer from between the wars. This vague idea gained a little flesh on its bones with the production of a rough sketch but didn't become a reality until Pat Lynch mentioned he was looking for something upon which to improve his flying skills. His current models were, he said, not sufficiently taxing for him to actually learn anything. I suggested that he try a low-wing type for a change and he asked if I had any designs in mind. Anyway, the upshot of it all is that Ryan's Daughter was drawn up in CAD and the plan forwarded to Pat. He promptly set about building the model - while I waited for a set of laser cut parts to arrive.

Although Pat finished his model before mine was even started, a serious hand injury prevented a successful test flight. Fortunately, he is now well on the road to recovery, but it did mean that I really had to get on and build my version.

You will notice slight differences between the two models, Pat's in the construction shots and mine in the photos of the finished model and flying shots. These are purely cosmetic differences, both models being built the same but built to look slightly different. The version you see on the plan is exactly as originally designed, and how I built my model. Which nose shape you prefer, and which cockpit positioning, is entirely up to you. As long as the basic model remains unchanged it won't make any noticeable difference to the way the model flies.

Equipment Required: The model is designed to be fairly lightweight, whilst still having sufficient bulk to cope with some wind. Both prototypes worked out to about 40 oz flying weight and I assure you that the model will handle a bit of a breeze. Test flights with my model were carried out on the type of day I would normally stay at home.

To achieve both goals, reasonably lightweight gear was used, matched to a medium sized brushless outrunner and 3S LiPo pack. In my case, that meant that servos were Hitec HS81s, the receiver is a medium sized Hitec job that I have had for years and the motor is a PIS 1500. A 3200 mAh battery pack and 30 A ESC keep it all working. The motor is almost certainly overkill, but it's awfully nice to have a good reserve of power available. Fairly lightly propped, an APC 11 x 5, the motor pulls around 21 A flat out. Given a coarser pitch prop, the PIS 800E would almost certainly be pulling a similar current. So, any motor rated for 170-200 watts would be fine. I have 220 watts available but have yet to get to full throttle.

Construction Overview: There is nothing complicated or unusual about the way the model is built, it is all basic, totally conventional aeromodelling. Bearing that in mind, along with the fact that Ryan's Daughter isn't aimed at the complete novice, I'll keep the construction details fairly brief. What I will concentrate on are any areas that I feel may need additional information. To keep it all simple, I'll separate the construction into stages and leave it to you to determine how much of the advice given you actually want to take. Since the fuselage is probably the most complicated part of the entire model, that seems like the perfect place to begin.

Fuselage: Study of the plan will reveal that the fuselage is basically three box structures, joined and shaped. Pat built his as three distinct boxes, but I simply built a front and rear and then joined them. Because of the length of the 1500 (I had originally intended to fit the 800E) I used a scrap balsa spacer to move the ply part N a little further forward. You could, of course, move the firewall back but I wanted to use the laser cut parts throughout. Since it would only fit in one position, that's where it went. Whilst the 800E is the same diameter as the 1500, it is quite a bit shorter.

With the basic boxes assembled and joined, the shape is filled out using formers, stringers and lots of thick balsa sheet for the nose. With the motor temporarily fitted, the nose blocks were tack glued in place and the motor shaft used to centre part N. The nose was rough shaped before being cut away in front of the firewall to provide easy access to the motor. The separation line I used is shown on the drawings, the lower nose block and forward section of the cowl being removed as a single unit. A wire dowel locates the cowl and a screw retains the lower block.

As an aside, I didn't hollow out the top nose block. I epoxied another piece to the nose block to mount the battery, to bring it level with the hole in F1, and epoxied a ply and Velcro strap battery retainer to it.

The only advice I can give here is to use fairly hard balsa (as hard as you can get) for the side stringers. The wood I used wasn't as hard as I would have liked and I need to remember not to pick up the model by the rear fuselage..." 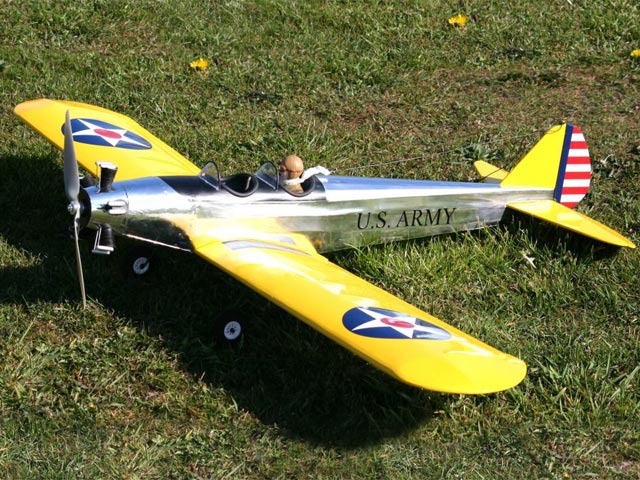 So that's what Peter looked like, tattoo and all. A noble addition to that big fluffy cumulus reserved for those Aeromodellers on whom His favour rests.
Miguel - 13/04/2022
Add a comment